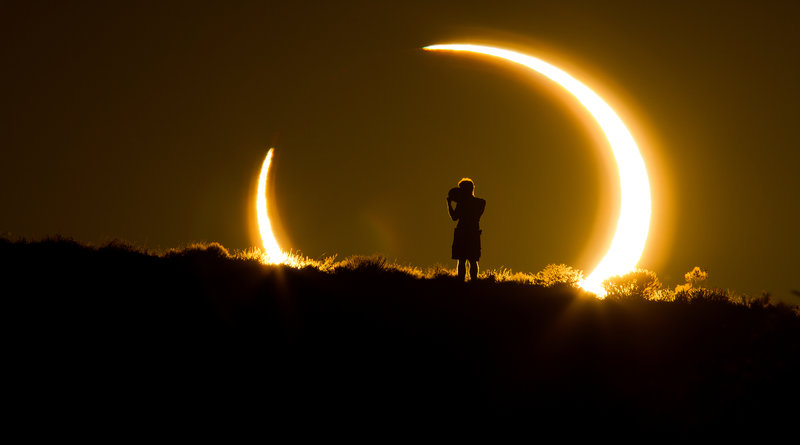 Just before this week’s solar eclipse, a writer for the Atlantic implied the solar system was “racist” because the path of the eclipse fell across areas of the country populated mostly by white people.

The August 18 piece, entitled “American Blackout,” seems to have been presented without satiric intent and is tagged “science” — not humor — on the left-wing news magazine’s website.

The piece, written by Brooklyn Law School Professor Alice Ristroph, began saying the path of the eclipse falls on white areas of the country, a fact that “presumably” does not prove that the solar system is racist:

On August 21, 2017, a total solar eclipse will arrive mid-morning on the coast of Oregon. It has been dubbed the Great American Eclipse, and along most of its path, there live almost no black people.

Presumably, this is not explained by the implicit bias of the solar system.

Presumably? Is there doubt that “the solar system” does not have any sort of racial animus?

Still, proving that everything is “racism” to liberals, the author then brusquely brushes aside the obvious truth that the solar system is indifferent to human racial bias and claimed, “Still, an eclipse chaser is always tempted to believe that the skies are relaying a message.”

Despite the author’s protestations, she went on to presume the sun and moon’s apparent racial bias by selecting only white areas to travel over:

Oregon, where this begins, is almost entirely white. The 10 percent or so of state residents who do not identify as white are predominantly Latino, American Indian, Alaskan, or Asian. There are very few black Oregonians, and this is not an accident. The land that is now Oregon was not, of course, always inhabited by white people, but as a U.S. territory and then a state, Oregon sought to get and stay white. Among several formal efforts at racial exclusion was a provision in the original state constitution of 1857 that prohibited any “free Negro or Mulatto” from entering and residing in the state.

…
From Oregon, the Great American Eclipse will travel through Idaho and Wyoming. (It will catch a tiny unpopulated piece of Montana, too.) Percentage-wise, Idaho, and Wyoming are even whiter than Oregon. And as in Oregon, but even more so, the few non-white residents of Idaho and Wyoming are not black — they are mostly Latino, American Indian, and Alaskan.

The article continued like this for some time as it followed the path of the eclipse. In so doing, Ristroph disparaged the Electoral College, Congress, the KKK, and U.S. history in general. With those historical footnotes, Ristroph seemed to imply repeatedly that the sun and moon were conspiring to follow the path of racial gerrymandering seen across U.S. history.

Throughout the article, Ristroph conflated the “totality” of the eclipse with a racial “totality” and wrapped up by saying, “This vision is one of exclusionary totality, not inclusiveness or compromise. It’s a vision that demands that you fight for what you believe, making no concessions, admitting no errors.”

The quixotic Atlantic piece concludes by lamenting that America is “still segregated,” which has resulted in “debts that no honest man can pay.”

Finally, warming one last time to her assumption that the solar system is racist, Ristroph said, “The strange path of the eclipse suggests a need for reorganization” of our society.