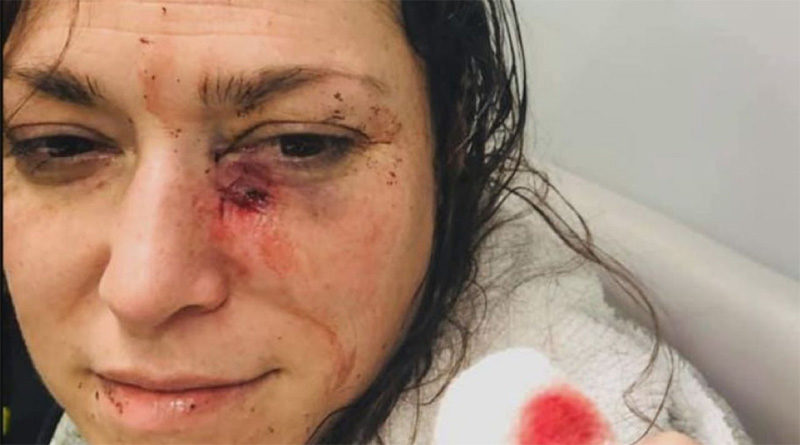 I’ve watched from ringside as St. Louis has regressed to the depths of Detroit, and reached a point where nothing lies ahead but anarchy and graftocracy. Its demise is glaringly evident in the following crime story, which is a metaphor for the fate of this once great city.

A white St. Louis resident named Alicia Clarke has been burglarized at least three times by a 15 year-old next-door neighbor named Hassan, who is six feet tall and approximately 175 pounds. In addition, he is a black, a Somali immigrant, a Muslim and — like most blacks — has an IQ lower than that of a potted plant at 49.

When Alicia Clarke found her cell phone missing after going for a jog, she traced it to her next-door neighbor’s backyard using a search app called My iPhone. There, she found it in the possession of Hassan, the black and Muslim immigrant. When she tried to recover it, according to Clarke “He knocked me down, pulling my hair, kicking.”

At this point, she went home to call police using another phone, but while she was reporting the assault, Hassan invaded her home through her back door with a weapon and attacked her. As Alicia Clarke states, “…he comes back with a weapon. He is on top of me. There was blood everywhere. I was literally fighting for my life at that point.”

This was no exaggeration: Hassan stabbed Alicia Clarke in the head, broke her nose, and stabbed her face in close proximity to her left eye with a metal rod that may have been a screwdriver. She has multiple staples in her head and under her eye where he stabbed her.

According to Alicia Clarke’s sister, Hassan “…has broken into Alicia’s car 3 different times and broken into another neighbor’s house. The police were involved every single time and reported that nothing could be done since he was a minor.”

Despite this most recent aggravated assault, the St. Louis Juvenile Court System quickly dismissed the case against Hassan. As Alicia Clarke indicates, “The most hurtful thing of all of this is the dropped charges… that was much more hurtful than the physical assault.”

A juvenile court official told a local TV station that a staff attorney deep-sixed Hassan’s case long before it ever got in front of a judge. Alicia Clarke said she was told her attacker was found incompetent to stand trial because of his 49-point IQ.

This means Hassan and other retarded black bastards have been given a license to commit violent assaults with impunity in St. Louis. Hassan may be retarded, but he quickly recognized that he can get away with almost anything from his previous scrapes with the law and the sorry nature of their eventual dispositions.

In fact, the prosecutor assigned to Alicia Clarke’s case told her that “even if Hassan had MURDERED her, the outcome would be no different and his prosecution would be dismissed.” According to Alicia Clarke and her sister, that is a verbatim quote.

MY COMMENTARY: With an IQ of 49, Hassan is eminently qualified to run for public office in what is left of St. Louis, and could eventually be elected to the Office of Mayor.

This is another example of Black Skin Privilege, a common phenomenon in predominately black cities like St. Louis, where retarded black criminals are often acquitted by a corrupt and dysfunctional system of justice, staffed by thoroughly corrupt and incompetent black officials.

The city is governed by a black organized criminal element. There is only one remaining white, city-wide elected official in St. Louis, and she will be gone after she becomes a victim of black voter fraud following April of 2021’s “Democrat” Mayoral Primary. She is a big proponent of racial “diversity,” and will deserve her fate.

Alicia Clarke is absolutely correct that the system has failed her. In such a situation, there is nothing left to do but get a 20 Gauge semi-auto shotgun for her self-protection, take out the “plug” to allow five rounds of #2 shot, and make damned sure she empties all five into the chest of this black bastard if he ever enters her house again.

If St. Louis were a normal place, by sending that n*gger to meet Allah, Alicia Clarke would be given a medal for saving the state of Missouri millions of dollars processing Hassan through future scrapes with the criminal justice system. Such an event might also be a deterrent to other retarded black bastards.