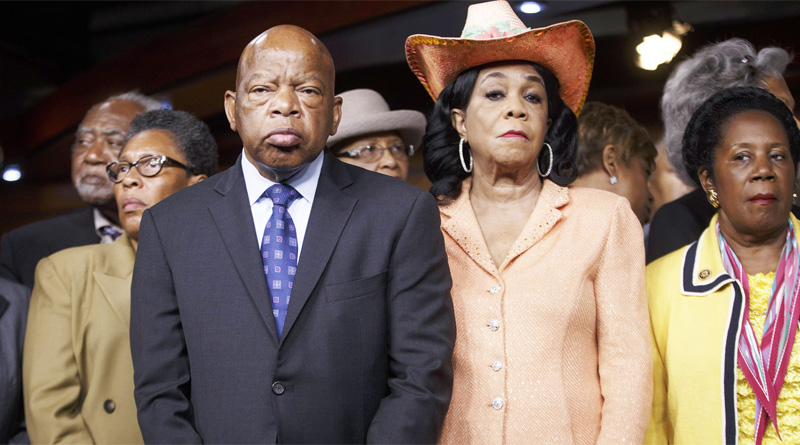 There’s real competition among the members of the Congressional Black Caucus to see who’s the most retarded and witless baboon in the bunch. There are many contenders, all highly qualified.

A couple of years ago that “brane-dokter” from Georgia – Hank Johnson – expressed concern that the Island of Guam might “tip over and capsize” under the weight of military exercises by the U.S. Navy. You see, this black genius thinks that islands are a floating geographic phenomenon.

Years before, Sheila Jackson Lee of Texas asked someone from the Jet Propulsion Lab if the Mars Pathfinder was able to take a photo of the flag that Neil Armstrong planted on Mars. Exposing the genius routinely found within the Congressional Black Caucus, she confused the Moon with Mars. (Btw, Mankind has only been to the Moon, but not Mars.)

Such displays of genius merely set the stage for the latest example of black brilliance. On April 9th, Maxine Waters – the House Banking Committee Chair – chastised the CEOs of the five “megabanks” about student loan default rates and demanded to know what they were doing to resolve the problem.

Each CEO sheepishly testified that they had stopped making student loans more than 10 years ago, which clearly caught Maxine Waters by surprise, although everyone with a three-digit IQ had known this for the past decade.

She SHOULD have known what everyone with a brain knows, because it was black imbeciles like Waters and her equally stupid and insipid black colleagues who allowed the federal government to take over the student loan program 10 years ago. It was done to ensure that hopelessly retarded blacks – much like those in the Congressional Black Caucus — could borrow enormous sums of tuition money, and then have their defaulted student loans transferred to white taxpayers when they inevitably defaulted.

The reason most blacks remain in the underclass — despite $23 Trillion spent on “Urban Welfare Spending” — is entirely attributable to the low caliber of the morons they elect to public office: They are no more able to recognize the fact that they routinely elect morons and trash than people who are “tone-deaf” can recognize when they sing out of key in church.

One thought on “Vicious Cycle”