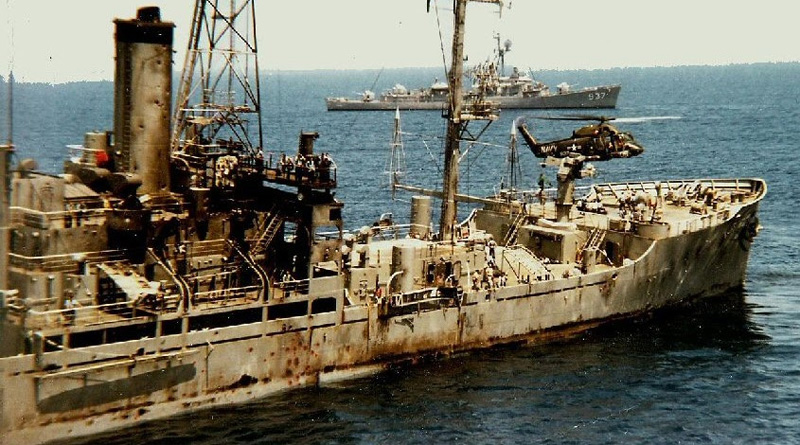 Last Wednesday at noon at Arlington National Cemetery I attended the annual commemorative gathering of the survivors and friends of the U.S.S. Liberty. The moving service included the ringing of a ship’s bell for each one of the thirty-four American sailors, Marines and civilians that were killed in the deliberate Israeli attack that sought to sink the intelligence gathering ship and kill all its crew. Present were a number of surviving crewmembers as well as veterans like myself and other Americans who are committed to ensuring that the story of the Liberty will not die in hopes that someday the United States government will have the courage to acknowledge what actually happened on that fateful day.

It was the forty-ninth anniversary of the attack. In truth the attack on the U.S.S. Liberty by Israeli warplanes and torpedo boats on June 8, 1967, has almost faded from memory, with a younger generation completely unaware that a United States naval vessel was once deliberately attacked and nearly sunk by America’s “greatest friend and ally” Israel. The attack was followed by a cover-up that demonstrated clearly that at least one president of the United States even back nearly fifty years ago valued his relationship with the state of Israel above his loyalty to his own country.

It was in truth the worst attack ever carried out on a U.S. Naval vessel in peace time. In addition to the death toll, 171 more of the crew were wounded in the two-hour assault, which was clearly intended to destroy the intelligence gathering vessel operating in international waters collecting information on the ongoing Six Day War between Israel and its Arab neighbors. The Israelis, whose planes had their Star of David markings covered up so Egypt could be blamed, attacked the ship repeatedly from the air and with gunboats from the sea.

The incredible courage and determination of the surviving crew was the only thing that kept the Liberty from sinking. The ship’s commanding officer Captain William McGonagle was awarded a Congressional Medal of Honor for his heroic role in keeping the ship afloat, though President Lyndon Baines Johnson broke with tradition and refused to hold the medal ceremony in the White House, also declining to award it personally, delegating that task to the Secretary of the Navy in a closed to the public presentation made at the Washington Navy Yard. The additional medals given to other crew members in the aftermath of the attack made the U.S.S. Liberty the most decorated ship based on a single engagement with hostile forces in the history of the United States Navy.

The cover-up of the attack began immediately. The Liberty crew was sworn to secrecy over the incident, as were the Naval dockyard workers in Malta and even the men of the U.S.S. Davis, which had assisted the badly damaged Liberty to port. A hastily convened and conducted court of inquiry headed by Admiral John McCain acted under orders from Washington to declare the attack a case of mistaken identity. The inquiry’s senior legal counsel Captain Ward Boston, who subsequently declared the attack to be a “deliberate effort to sink an American ship and murder its entire crew,” also described how “President Lyndon Johnson and Secretary of Defense Robert McNamara ordered him to conclude that the attack was a case of ‘mistaken identity’ despite overwhelming evidence to the contrary.” The court’s findings were rewritten and sections relating to Israeli war crimes, to include the machine gunning of life rafts, were excised. Following in his father’s footsteps, Senator John McCain of Arizona has used his position on the Senate Armed Services Committee to effectively block any reconvening of a board of inquiry to reexamine the evidence. Most of the documents relating to the Liberty incident have never been released to the public in spite of the 49 years that have passed since the attack took place.

The faux court of inquiry and the medals awarded in secret were only the first steps in the cover-up, which has persisted to this day, orchestrated by politicians and a media that seem to place Israel’s interests ahead of those of the United States. Liberty survivors have been finding it difficult even to make their case in public. In early April a billboard that read “Help the USS Liberty Survivors – Attacked by Israel” was taken down in New Bedford Massachusetts. The billboard had been placed by the Honor Liberty Vets Organization and, as is normal practice, was paid for through a contractual arrangement that would require the billboard company to post the image for a fixed length of time. It was one of a number of billboards placed in different states. Inevitably, Israel’s well connected friends began to complain. One Jewish businessman threatened to take his business elsewhere, so the advertising company obligingly removed the billboard two weeks early.

After forty-nine years, the dwindling number of survivors of the Liberty are not looking for punishment or revenge. When asked, they will tell you that they only ask for accountability, that an impartial inquiry into the attack be convened and that the true story of what took place finally be revealed to the public.

That Congress is deaf to the pleas of the Liberty crew should surprise no one as the nation’s legislative body has been for years, as Pat Buchanan once put it, “Israeli occupied territory.” The Lobby’s ability to force Congress and even the presidency to submit to its will has been spelled out in some detail by critics, first by Paul Findley in They Dare to Speak Out, later by John Mearsheimer and Stephen Walt in The Israel Lobby, in Alison Weir’s Against Our Better Judgment, and most recently in Kirk Beattie’s excellent Congress and the Shaping of the Middle East.

Congressional willingness to protect Israel even when it is killing Americans is remarkable, but it is symptom of the legislative body’s willingness to go to bat for Israel reflexively, even when it is damaging to U.S. interests and to the rights that American citizens are supposed to enjoy. I note particularly legislation currently working its way through Congress that will make it illegal for any federal funding to go to any entity that supports the Boycott, Divest and Sanction movement, better known as BDS. BDS is a way to put pressure on the Israeli government over its human rights abuses that is both non-violent and potentially effective. As the federal government has its hooks all over the economy and at various levels in education as well as state and local government its threat to force the delegitimization of BDS is far from an empty one.

Existing laws in more than twenty states with more on the way, including most recently New York, punishing entities that support the peaceful BDS movement by labeling BDS as anti-Semitic and making it illegal or sanctionable to support it are direct attacks on free speech. New York Governor Andrew Cuomo stated “We want Israel to know we are on its side.” And it doesn’t stop with BDS. Recently signed trade agreements with Europe were drafted to be conditional on European acceptance of Israel’s occupation of the Palestinian West Bank while Israel is also pushing to censor the internet to make material that constitutes “incitement” banned. Incitement would, of course, include anything critical of Israel or its government on the grounds that it is anti-Semitic.

In an email to the USS Liberty Veterans Association, Kevin J. Bartlett, J.D., National Judge Advocate of The American Legion (and US Navy Veteran) writes:

I understand that your organization would like to submit an application for a booth at The American Legion National Convention in August.

The USS Liberty Association is not allowed to rent a booth at national conventions and have them staffed because one of your members committed assault and battery on one of our staff and was convicted of his crimes. In addition, members of your organization have attempted to set up in the national convention exhibit hall without renting a booth.

The American Legion has a 100-year track record of helping veterans and their families. Unfortunately, we’ve had a long and unpleasant history with the USS Liberty Veterans Association, and we have chosen not to do business with them.

Democratic candidate presumptive Hillary Clinton has explicitly promised to do all in her power to oppose BDS, telling an adoring American Israel Public Affairs Committee audience in March that “Many of the young people here today are on the front lines of the battle to oppose the alarming boycott, divestment and sanctions movement known as BDS. Particularly at a time when anti-Semitism is on the rise across the world, especially in Europe, we must repudiate all efforts to malign, isolate and undermine Israel and the Jewish people. I’ve been sounding the alarm for a while now. As I wrote last year in a letter to the heads of major American Jewish organizations, we have to be united in fighting back against BDS.”

So the treatment of the U.S.S. Liberty should surprise no one in a country whose governing class has been for decades doing the bidding of the powerful lobby of a tiny client state that has been nothing but trouble and expense for the United States of America. Will it ever end? As the Israel Lobby currently controls the relevant parts of the federal government and much of the media change is not likely to happen overnight, but there are some positive signs. If the Democratic Party platform committee under the influence of Bernie Sanders is successful in toning down the usual extravagant praise of Israel – against the wishes of Hillary, one might add – that would be a sign that change is difficult but not necessarily impossible. If Donald Trump wins and holds to his promise to be neutral between Israel and Palestine in negotiations that too would be a marked shift in perception of the conflict. And if the American people finally wake up and realize that they are tired of the entire farce and decide to wash their hands of the Middle East that would change everything. Just imagine picking up the morning newspaper and not reading a front page story about the warnings and threats coming from that great world leader Benjamin Netanyahu. That would be quite remarkable.