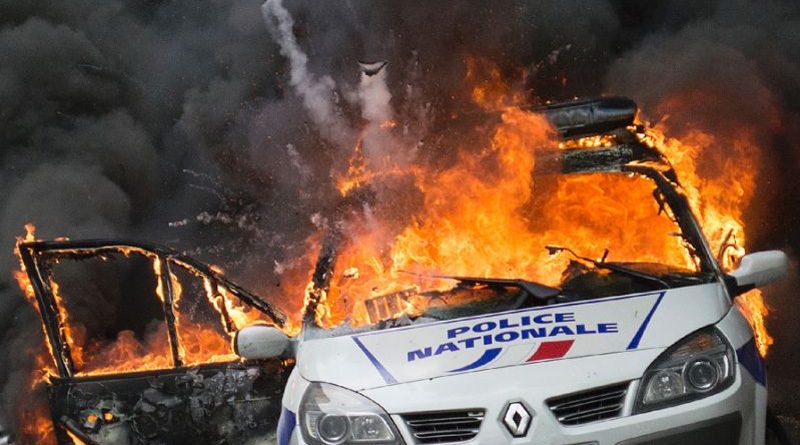 Here’s a story which is “surprisingly” not getting much attention in the United States. In fact, I wouldn’t have even seen it had one of our readers in Lyon, France named Dylan Kissane not sent in a tip with a link to a story from The Local in that country. (Name used with permission.)

We’ve seen and discussed plenty of stories here in America about violent, leftist Antifa attacking not only conservative demonstrators but law enforcement officials. It turns out that we don’t have a monopoly on that sort of activity. In fact, we’ve been exporting Antifa to share this phenomenon with other nations. One 27 year old American is currently on trial in Paris along with a number of French attackers. They’re charged with (among other things) shattering the windows of a police car and setting it on fire with the officers inside during a demonstration back in the spring of 2016.

Eight anti-fascist activists, including an American national, went on trial in Paris on Tuesday for a violent attack on French police that was captured in a shocking video that made headlines around the world.

The incident took place in May 2016 on a day when police held a demonstration in the French capital to highlight “anti-police hatred” that had risen up during labour reform protests that year.

On the same day anti-fascist militants staged their own march which flared into violence and a group of them attacked a police car on the Quai de Valmy in the 10th arrondissement.

A 27-year-old American was among the mob that smashed the windows of the police car before it was torched with police officers inside.

Most likely due to strict French privacy laws, authorities still aren’t officially releasing the name of the American suspect, (see update at bottom) but the French authorities are already saying that he’s confirmed his participation in the attack. You can see him in this video. He’s the one who arrives after the police car stops and smashes in the back window of the vehicle with some sort of large pipe. Moments later, one of his accomplices sets the car ablaze. WARNING: Scenes of graphic violence.

This was a particularly heinous attack. One female officer inside the police car later described how she feared that she was about to die. Even more incredible is the amount of restraint which the officers show after exiting the car and confronting their attackers. One of them has earned the nickname of “The Kung-fu Cop” in the French press.

We should just remind you again that the trail is the new aspect of this story because the actual attacks took place back in May of 2016. It did make it into the French press at the time, but didn’t receive quite as much play on our side of the pond. Fox News picked up the same story out of Paris but couldn’t confirm the name of the Antifa suspect then either. The year and a half gap is due to the fact that it took a while for them to make arrests and even longer to go through the process of bringing the matter to trial. Even more ironic is the fact that the demonstration which began all of this was actually being put on by the police themselves, described as an effort to “highlight “anti-police hatred” that had risen up during labour reform protests that year.”

Hatred for the police, a love of anarchy and the suppression of free speech are clearly not ideas which are unique to the American left. It’s found all through Europe, but now an American citizen has been caught up in their legal system. He probably shouldn’t expect any help from this White House in getting him out of that mess.

UPDATE: (Jazz) The Daily Mail is reporting that the American on trial is a 28 year old transgender individual named as “Kara B.” This isn’t confirmed yet