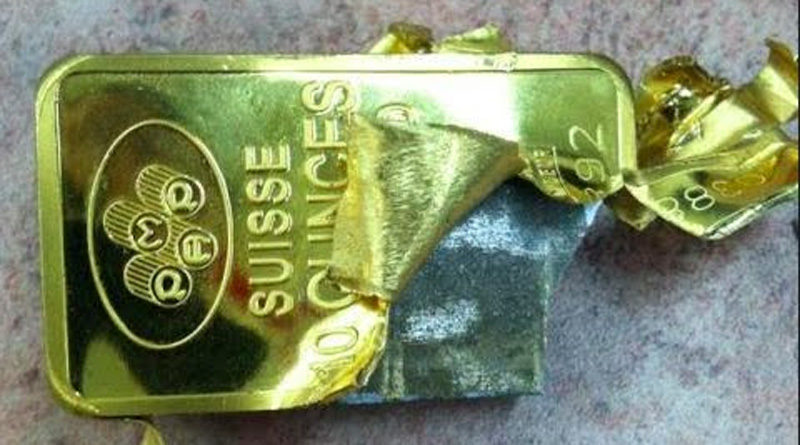 Over the years, we have periodically reported of the occasional gold bar discovered as counterfeit in Manhattan’s Diamond District which instead of containing the yellow precious metal would be filled with gold-plated tungsten or in some cases copper. The news would spark a brief wave of outrage, prompting physical gold holders to run ultrasound spot checks of their inventory, at which point interest would wane and why not: buyer, after all, beware in gold as in every other market, and if someone is spending thousands to buy fake gold, well that’s Darwinism in action.

Yet one market which seemed stubbornly immune to any counterfeiting was that of physical gold in China, which was odd considering that over the past decade China had emerged as the world’s biggest counterfeiter of various, mostly industrial metals used to secure bank loans, better known as “ghost collateral”, and which adding insult to injury, would frequently be rehypothecated meaning often several banks would have claims to the same (fake) asset.

All that is about to change with the discovery of what may be one of the biggest gold counterfeiting scandal in recent history. And yes, not only does it involve China, but it emerges from a city that has become synonymous for all that is scandalous about China: Wuhan itself.

With that preamble in mind, we introduce readers to Wuhan Kingold Jewelry Inc., a company which as the name implies was founded and operates out of Wuhan, and which describes itself on its website as “A Company with a Golden future.”

In retrospect, it probably meant “copper” future, because as a remarkable expose by Caixin has found, more than a dozen Chinese financial institutions, mainly trust companies (i.e., shadow banks) loaned 20 billion yuan ($2.8 billion) over the past five years to Wuhan Kingold Jewelry with pure gold as collateral and insurance policies to cover any losses. There was just one problem: the “gold” turned out to be gold-plated copper.

Some more background: Kingold – whose name was probably stolen from Kinross Gold, one of the world’s largest gold miners – is the largest privately owned gold processor in central China’s Hubei province. Its shares are listed on the Nasdaq stock exchange in New York (although its current market cap of just $10MM is a far cry from its all time highs hit when the company IPOed on the Nasdaq around 2010) . The company is led by Chairman Jia Zhihong, an intimidating ex-military man who is the controlling shareholder.

What could go wrong?

Well, apparently everything as at least some of 83 tons of gold bars used as loan collateral turned out to be nothing but gilded copper. That has left lenders holding the bag for the remaining 16 billion yuan of loans outstanding against the bogus bars. And as Caixin adds, the loans were covered by 30 billion yuan of property insurance policies issued by state insurer PICC Property and Casualty and various other smaller insurers.

The fake gold came to light in February when Dongguan Trust (one of those infamous Chinese shadow banks) set out to liquidate Kingold collateral to cover defaulted debts. As the report continues, in late 2019 Kingold failed to repay investors in several trust products. To its shock, Dongguan Trust said it discovered that the gleaming gold bars were actually gilded copper alloy.

The news sent shockwaves through Kingold’s creditors. China Minsheng Trust – another shadow banking company and one of Kingold’s largest creditors – obtained a court order to test collateral before Kingold’s debts came due. On May 22, the test result returned saying the bars sealed in Minsheng Trust’s coffers are also copper alloy.

And with authorities investigating how this happened, Kingold chief Jia flatly denies that anything is wrong with the collateral his company put up. Well, what else could he say…

As Caxin notes, the Kingold counterfeiting case echoes China’s largest gold-loan fraud case, unfolding since 2016 in the northwest Shaanxi province and neighboring Hunan, where regulators found adulterated gold bars in 19 lenders’ coffers backing 19 billion yuan of loans, or about USD $2.5 billion. In that case, a lender seeking to melt gold collateral found black tungsten plate in the middle of the bars.

In the case of Kingold, the company said it took out loans against gold to supplement its cash holdings, support business operations and expand gold reserves, according to public records. It then appears to have decided to apply a gold-layer to tons of copper and pretend it was money-good gold collateral. And even more shocking, for years nobody checked the authenticity of the pledged collateral!

In 2018, the company beat a number of competitors in bidding to buy a controlling stake in state-owned auto parts maker Tri-Ring Group. Kingold offered 7 billion yuan in cash for 99.97% of Tri-Ring. The Hubei government cited the deal as a model of so-called mixed-ownership reform, which seeks to invite private shareholders into state-owned enterprises. But Kingold has faced problems taking over Tri-Ring’s assets amid a series of corruption probes and disputes involving Tri-Ring.

After obtaining the test results, Minsheng Trust executive said the company asked Jia whether the company fabricated the gold bars: “He flatly denied it and said it was because some of the gold the company acquired in early days had low purity,” the executive said. In a telephone interview with Caixin in early June, Jia denied that the gold pledged by his company was faked.

In early June, Minsheng Trust, Dongguan Trust and a smaller creditor Chang’An Trust filed lawsuits against Kingold and demanded that PICC P&C cover their losses. PICC P&C declined to comment to Caixin on the matter but said the case is in judicial procedure. A source from PICC P&C told Caixin that the claim procedure should be initiated by Kingold as the insured party rather than financial institutions as beneficiaries. Kingold hasn’t made a claim, the Caixin source said.

In total, Kingold pledge tens of thousands of kilograms of gold to no less than 14 creditors amounting to just under 20 billion yuan. 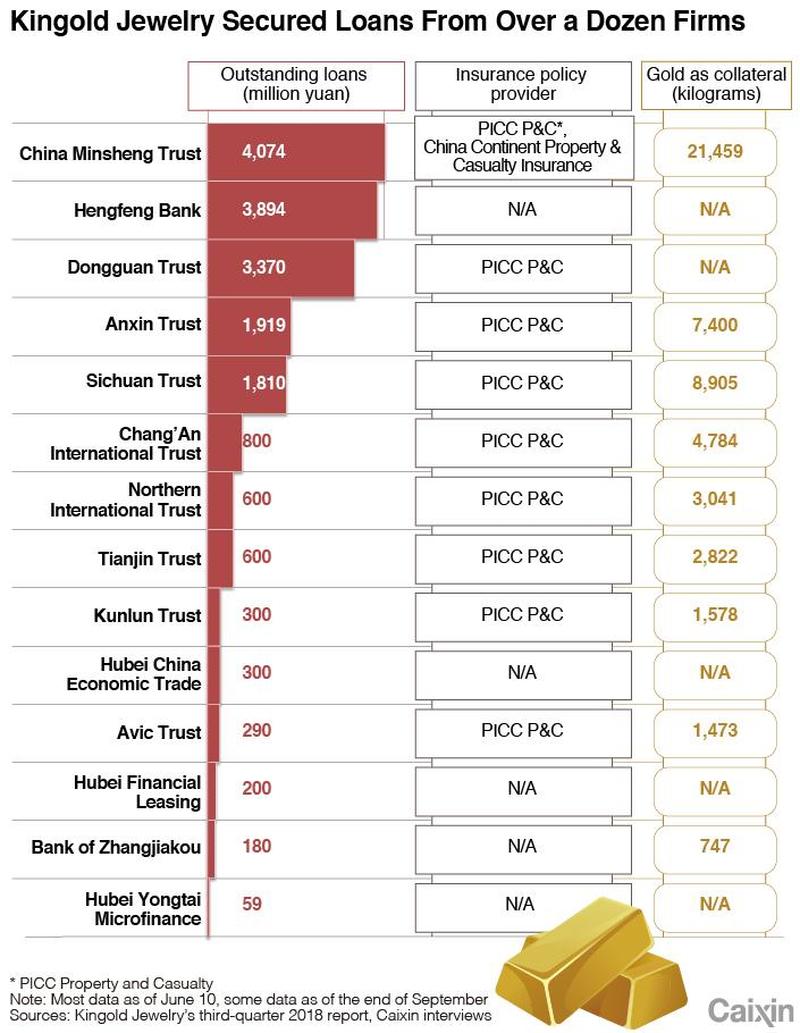 Caixin learned that the Hubei provincial government set up a special task force to oversee the matter and that the public security department launched an investigation. The Shanghai Gold Exchange, a gold industry self-regulatory organization, disqualified Kingold as a member as of last week.

Meanwhile, Kingold defaulted on 1.8 billion yuan of loans from Dongguan Trust with an additional 1.6 billion yuan due in July.

The 83 tons of purportedly pure gold stored in creditors’ coffers by Kingold as of June, backing the 16 billion yuan of loans, would be equivalent to 22% of China’s annual gold production and 4.2% of the state gold reserve as of 2019.

In short, more than 4% of China’s official gold reserves may be fake. And this assume that no other Chinese gold producers and jewelry makers are engaging in similar fraud (spoiler alert: they are.)

Founded in 2002 by Jia, Kingold was previously a gold factory in Hubei affiliated with the People’s Bank of China that was split off from the central bank during a restructuring. With businesses ranging from gold jewelry design, manufacturing and trading, Kingold is one of China’s largest gold jewelry manufacturers, according to the company website.

The company debuted on Nasdaq in 2010. The stock currently trades around $1 apiece, giving Kingold a market value of $12 million, down 70% from a year ago. A company financial report showed that Kingold had $3.3 billion of total assets as of the end of September 2019, with liabilities of $2.4 billion.

Jia, now 59, served in the military in Wuhan and Guangzhou and spent six years living in Hong Kong. He once managed gold mines owned by the People’s Liberation Army, which means he likely has connections all the way to the very top.

The deal drew immediate controversy as some rival bidders questioned the transparency of the bidding process and Kingold’s qualifications.

And here things get even crazier: according to Kingold’s financial reports, the company had only 100 million yuan of net assets in 2016 and 2 billion yuan in 2017, sparking doubts over its capacity to pay for the deal. Despite the fuss, Kingold paid 2.8 billion yuan for the first installment shortly after the announcement of the deal. The second installment of 2.4 billion yuan was paid several months later with funds raised from Dongguan Trust.

In December, Tri-Ring completed its business registration change, marking completion of Kingold’s takeover. However, the new owner has since faced troubles mobilizing Tri-Ring’s assets because of a series of corruption probes surrounding the auto parts maker since early 2019 that brought down Tri-Ring’s former chairman. As Caixin the notes, a majority of Tri-Ring’s assets were frozen amid the investigation and subsequent debt disputes, limiting Jia’s access to the assets.

The fraud is finally exposed

Hobbled by the Tri-Ring deal, which cost billions of yuan but has yet to make any return, Jia’s capital chain was eventually broken when Hengfeng Bank pushed for repayment, triggering a series of events that brought the fake gold to light, said a person close to the matter. Insurers’ involvement was key to the success of Kingold’s gold-backed loan deals. The insurance policies provided by leading state-owned insurers like PICC P&C were a major factor defusing lenders’ risk concerns, several trust company sources said.