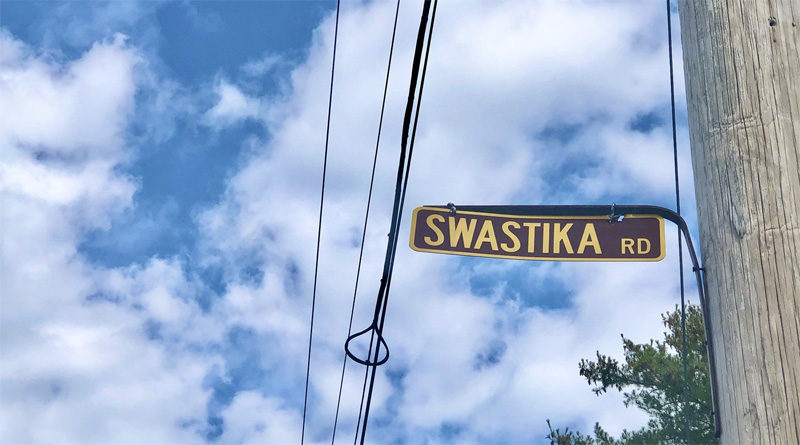 A small town in Clinton County has voted against considering a name change for the tiny hamlet of Swastika, New York. The decision comes amid a wider reckoning over symbols and monuments with links to white supremacy.

Michael Alcamo lives in New York City but loves visiting the Adirondacks whenever he can to cycle and recreate.

He says he especially likes riding through the North Country’s tiny towns and hamlets and often notices the historical cemeteries with small American flags marking the graves of veterans.

He was on a trip like this through Clinton County this summer when he noticed something else.

“Suddenly I came to a town called Swastika, which is a symbol of the tyranny and hatred those soldiers fought and died to fight,” he said, recounting his reaction to the sign. [NOTE: Swastika is an ancient and greatly auspicious symbol of the Hindu tradition also. It is inscribed on Hindu temples, ritual altars, entrances, and even account books.]

“So the effect was just jarring and profoundly, I thought, disrespectful to those flags and to the sacrifices all those Americans made through World War II,” he said.

Alcamo reached out to Clinton County in August to see if they would consider updating the unincorporated hamlet’s name. He was soon directed to email the town of Black Brook, about 30 miles south of Plattsburgh, which has jurisdiction over Swastika.

And so, on Monday night, the town’s four councilors voted on whether to consider a name change. And after five minutes of discussion, they unanimously voted against it.

“So basically Swastika was named by the founders of the area who settled there,” said Black Brook’s town supervisor Jon Douglass, who was at Monday’s meeting, but did not vote.

Douglass says the hamlet was settled sometime in the 1800s. But the name came later, and derived from the Sanskrit word meaning “well-being.” The four-sided geometric character that represents the swastika has been used for thousands of years in Indian religions and seen as a symbol of good luck.

Of course, that meaning was overshadowed in the 1930s with the rise of Adolf Hitler who co-opted the swastika as a symbol for Nazism, anti-semitism, and the slaughter of six million Jews.

Douglass says this is not the first time the hamlet’s name has been scrutinized.

“There was concern that due to the Germans and everything that people may have a different outlook on the name. And some of the residents that were from that area actually fought in World War II and refused to change the name just because Hitler tried to tarnish the meaning of swastika.”

Anti-semitism has been on the rise across the country with a surge in reports of harassment and vandalism against Jewish communities — that frequently includes a swastika.

Douglass says the council did not see a reason to change the name despite its widespread use as a symbol of hate and white supremacy today.

“I think that’s probably, maybe some viewpoint that it’s associated with hate. But then I believe there are others that do not associate it with hate,” said Douglass. “I mean swastika was used in numerous religions. Did the Hindus and the [Buddhists] … did they erase it from their religious history because of the Germans?”

The episode mirrors a debate playing out in cities and towns, especially in the southern United States over the removal of Confederate monuments and statues erected during the Jim Crow era.

Alcamo, who submitted the request, was disappointed by the town’s reaction.

“I expected perhaps a commission would evaluate options and consider the opportunity to update the name to something less offensive and emblematic of tyranny,” he said. “I didn’t expect a quick, unanimous vote to reject the proposal.”

Alcamo says names and symbols have meaning, and in this case, the swastika is a symbol of hate in the U.S.

Alcamo is totally engulfed by tunnel-vision.