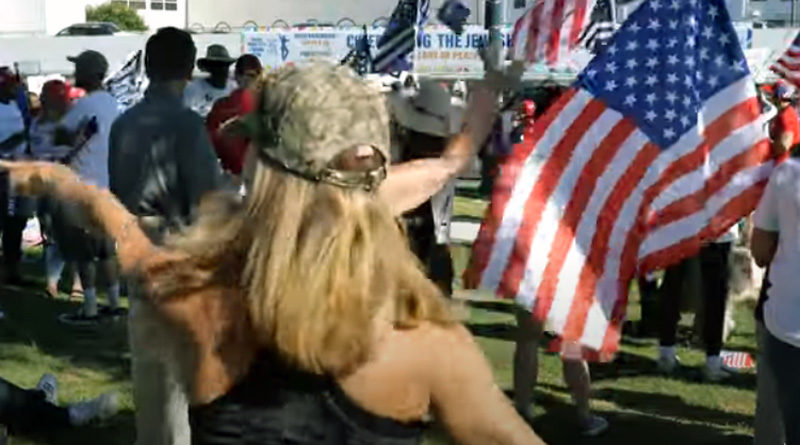 Antifa and Black Lives Matter protesters descended upon a rally in support of President Donald Trump on Saturday in Beverly Hills, CA, a day after the president announced that he and First Lady Melania Trump had tested positive for COVID-19.

Breitbart News spoke with Whitney R., supporter of Trump who attended the rally in Beverly Hills. She said, “Everyone was dancing, having a nice time. They just started a prayer for the president. BLM and Antifa showed up. The police had to set up a barricade in the middle between them and the Trump supporters. BLM tried to start a fire in a trash can. Antifa was going up to people and taking pictures and videos of Trump supporters, getting right in their faces.”

Some of Trump’s supporters chanted, “U-S-A!!” as Antifa and Black Lives Matter protesters approached them.

Beverly Hills: Antifa rolls in & one arrest is made. It was a Trump supporter for deploying pepper spray. pic.twitter.com/F8dQh6qKQc

Beverly Hills: Police set a barrier between protestors & the one coming antifa. pic.twitter.com/kodSnAJeZz

10/3/20 Beverly Hills, CA | After BLM-Antifa counter-protesters crashed Trump rally, Trump supporters do a march of their own through Rodeo Drive.

Some of the left-wing demonstrators shouted incoherently at Trump’s supporters.