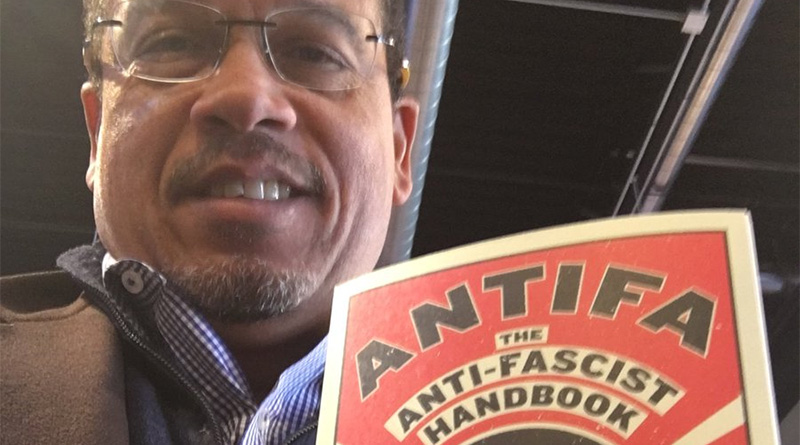 Muslim Rep. Keith Ellison, D-Minn., has lined up with the message of a book that explicitly calls for physical attacks on Trump supporters and praises the left-wing terrorist group known as “antifa.”

At @MoonPalaceBooks and I just found the book that strike fear in the heart of @realDonaldTrump pic.twitter.com/r81nYoeqpL

Bray’s work is closely analyzed in WND’s Special Report “Antifa: What Americans Need To Know About The Alt Left.”

Bray, a lecturer at Dartmouth College, is a sympathizer of the movement and openly discusses how antifa activists believe they can determine what Americans are allowed to read and say.

For example, he defines anti-fascism as “an illiberal politics of social revolution applied to fighting the Far Right, not only literal fascists.”

What he defines as the “far right” is expansive.

For example, Bray claims the “only long-term solution to the fascist menace is to undermine its pillars of strength in society grounded not only in white supremacy but also in ableism, heteronormativity, patriarchy, nationalism, transphobia, class rule, and many others.”

Essentially all Western history and traditional beliefs are thus defined as “fascist” and those who hold them justified targets of violence.

As the WND Special Report notes, this is a recipe for civil war:

“Adopting egalitarianism as the supreme virtue leads not to a society of equals, but a society endlessly divided by newly invented labels, at war with itself and constantly seeking new enemies to blame for its failure to realize an impossibility. Antifa, by insisting on this vision and asserting the right to attack anyone who disagrees with it, is thus assured of a permanent existence, even if there wasn’t one actual ‘fascist’ or National Socialist anywhere in the world.”

Republicans and supporters of President Trump are among the targets. Bray makes an explicit threat against Trump supporters in the book, which evidently did not trouble Ellison.

Get the FREE in-depth report that reveals the real stories of antifa. Learn what the mainstream media is desperate to conceal about the movement.

“Our goal should be that in twenty years those who voted for Trump are too uncomfortable to share that fact in public. We may not always be able to change someone’s beliefs, but we sure as hell can make it politically, socially, economically, and sometimes physically costly to articulate them.”

Such views are not surprising for Bray, an admitted communist. However, some might find it surprising that a United States congressman would openly line up with someone who calls for physical violence against Republicans.

Yet Ellison has a long history of involvement with far-left, anti-white politics. While at the University of Minnesota Law School, Ellison defended the Nation of Islam and appeared on stage with the notorious anti-Semite and anti-white extremist Khalid Abdul Muhammad.

Muhammad was well-known for his expletive-laden calls to kill all white people and even shoot into their graves.

As researcher Trevor Loudon notes in his blockbuster documentary “The Enemies Within,” Ellison worked closely with members of the Communist Party during his early election campaigns and was active in extreme left circles.

“During his student days, Ellison was very close to the Maoists of Freedom Road Socialist Organization,” he told WND. “They believed in the Communist Party’s old 1930s dream of a black state in the South to split and weaken America to Soviet advantage. It’s no wonder then that Ellison supported a similar notion.”

Indeed, while in law school, Ellison proposed the breakup of the United States and the creation of a black ethnostate.

He identified the states of Arkansas, Alabama, Georgia, Louisiana and Mississippi as a suitable breadth of territory for the new nation. Ellison also called the Constitution “the best evidence of a white racist conspiracy to subjugate other peoples.”

Ellison did not reply to media inquiries asking if he still held these black nationalist views. Some black congressmen, such as Hank Johnson of Georgia, did not find anything wrong with the writings when they were exposed.

“I don’t see anything really objectionable,” Johnson told the Daily Caller. “What he apparently proposed was apportioning of the United States into a southeastern section.”

Ellison’s support of antifa activists also wouldn’t be the first time he expressed support for an organization accused of links to terrorism.

He has deep ties to the Muslim Brotherhood and received payments from the Muslim American Society, another group that has been called a “national security threat.”