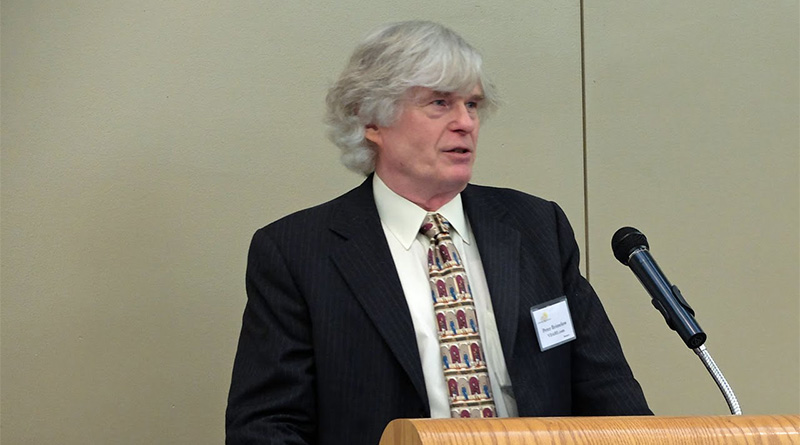 A white identity group known for anti-immigration views has sued Mayor John Suthers. The move comes after VDARE’s conference in Colorado Springs was canceled by the Cheyenne Mountain Resort, following widespread backlash and an announcement by Suthers that the city wouldn’t provide resources for the event. The federal lawsuit alleges that Suthers and the city violated VDARE’s First Amendment rights.

(Note: VDARE’s attorney was also in contact with the Indy to dispute our description of the organization’s viewpoints in early 2018.)

Filed by VDARE Foundation on Dec. 21 in U.S. District Court in Denver, the lawsuit seeks $1 million in compensatory damages, unspecified punitive damages, prejudgment interest and an injunction forbidding the city and Suthers from denying services to entities and events based on “their controversial viewpoints and affiliations.”

“The matter is completely without merit, and I’m confident the city will prevail,” he tells the Independent through a spokesperson.

This is the first lawsuit by VDARE challenging a government official’s chilling of its free speech and peaceful assembly rights. Though I have not been a part of any of the negotiation efforts, it is my understanding that VDARE has been unable to secure space for future conferences since Mayor Suthers’ proclamation and the subsequent cancellation of VDARE’s Colorado Springs event in spite of their efforts to do so.

This is especially troubling for those of us who support the constitutionally protected First Amendment rights of all groups, whether controversial, favored or disfavored in the eyes of governmental authorities, to peacefully assemble and share ideas. Yet we see officials in other jurisdictions, such as Portland, Oregon in Octboer [sic] of 2018, aggressively and at significant taxpayer expense, providing government services to support and protect radical, violent, disruptive groups like Antifa as they literally take over city streets.

The lawsuit comes at a time when the GOP’s chief, President Donald Trump, has energized white identity groups across the country with his immigration policies, which have resulted in thousands of children being separated from their parents at the Mexican border and court battles over his executive orders to bar people from predominantly Muslim countries from entering the United States.

VDARE supports Trump’s policies and states on its website, “Diversity per se is not strength, but a vulnerability.”

It was widely reported that Jason Kessler, an organizer for the 2017 Unite the Right rally in Charlottesville, Virginia had written posts for VDARE.com. But VDARE also has more mainstream contributors — Michelle Malkin, whose syndicated column appears in the Gazette and other publications, has been featured on VDARE.com, as have right-wing Breitbart news personalities. VDARE founder Peter Brimelow says the site also has Democratic contributors.

The local, canceled event was to feature a host of anti-immigration speakers. Media Matters for America reported that they would include: “anti-immigrant writer Peter Brimelow, Breitbart.com columnist Tom Tancredo, and writer John Derbyshire, who describes himself as a ‘mild and tolerant’ ‘homophobe’ and ‘racist.’”

Brimelow, according to the lawsuit and VDARE’s website, has served as a writer/editor for MarketWatch, Forbes Magazine, Fortune Magazine, Barron’s, Financial Post, Maclean’s and National Review. He disputes that VDARE is based on white nationalism, calling the group, instead, “a coalition, agreed only on the need for immigration reduction.”

According to the lawsuit, VDARE booked the Cheyenne Mountain Resort on March 31, 2017 for a conference to be held in April 2018. The following August, VDARE grabbed headlines when its plans surfaced.

The resort, the lawsuit says, “was fully aware of VDARE and its mission, as well as the potential for media attention and possible protests arising from the Conference.”

But those plans folded after Suthers issued this statement on Aug. 14:

The City of Colorado Springs does not have the authority to restrict freedom of speech, nor to direct private businesses like the Cheyenne Mountain Resort as to which events they may host. That said, I would encourage local businesses to be attentive to the types of events they accept and the groups that they invite to our great city.

The City of Colorado Springs will not provide any support or resources to this event, and does not condone hate speech in any fashion. The City remains steadfast in its commitment to the enforcement of Colorado law, which protects all individuals regardless of race, religion, color, ancestry, national origin, physical or mental disability, or sexual orientation to be secure and protected from fear, intimidation, harassment and physical harm.

VDARE alleges the statement “amounted to a refusal to provide city services, including police protection, for the Conference due to, among other things, its controversial subject matter, VDARE’s controversial viewpoints and published content in opposition to current immigration policies, which Defendants termed ‘hate speech,’ and the negative media attention that the Conference had attracted.”

It’s worth noting that beyond basic services provided to all citizens, such as responding to emergency calls, the city doesn’t provide services for events held on private property as a general rule. Large special events (that block streets, involve more than 10,000 people, serve alcohol on public property, or include high-risk activities like fireworks) or other events held on certain public properties have to apply for special event permits. The event-holder still pays for services associated with the event, like police assigned to the event (and/or private security), unless it is deemed a city-sponsored event.

But the lawsuit alleges that after Suthers’ statement came out, the El Paso County Sheriff’s Office told a Denver Channel 7 reporter that deputies wouldn’t provide coverage for the conference unless requested by the Colorado Springs Police Department.

Then, on Aug. 15, the resort said publicly it would not host the VDARE conference and canceled the contract, a move for which Suthers expressed approval. “I know I am joined by many Colorado Springs residents when I say I appreciate Cheyenne Mountain Resort’s action to cancel this conference, and its conscientious decision not to bring this group to Colorado Springs,” Suthers’ statement said.

But Suthers’ words and their results constitute a violation of the First Amendment, VDARE alleges. From the lawsuit:

Defendants’ promise that the City would not provide “any support or resources” to the Conference, given the obvious and foreseeable need for municipal police and fire services, had the effect of depriving VDARE of its First Amendment rights, chilling its speech on matters of public concern, and depriving VDARE and potential attendees of the Conference from communicating on important national issues such as immigration control and reform. By refusing to provide basic safeguards for the Conference in order to protect event sponsors and participants, Defendants deprived the Conference’s sponsors and participants of their rights to peaceably assemble and debate issues of importance to themselves, to their community, and to the country as a whole.

The lawsuit alleges Suthers also violated the 14th Amendment of equal protection of the law in that “Defendants threatened to withhold city services based on Plaintiff’s speech and associations.”

As a result, the lawsuit claims, VDARE was deprived of its right to free speech, loss of revenue from the conference and negative publicity, and inability to conduct future conferences and events in Colorado Springs.

VDARE also alleges the city and Suthers retaliated against the organization for exercising its First Amendment right, which requires proof of three elements:

• that VDARE was engaged in constitutionally protected speech,
• that the city’s and Suthers’ actions caused VDARE to suffer injury that would chill a person of ordinary fitness from continuing to engage in that activity,
• that the city’s and Suthers’ action was substantially motivated as a response to VDARE’s exercise of constitutionally protected conduct.

A scheduling and planning conference in the lawsuit has been scheduled for March 11.

This lawsuit comes as the city is defending against another federal case brought by the Environmental Protection Agency in 2016, alleging violations of the Clean Water Act due to alleged lack of stormwater controls. The city has spent more than $3 million on that lawsuit so far.