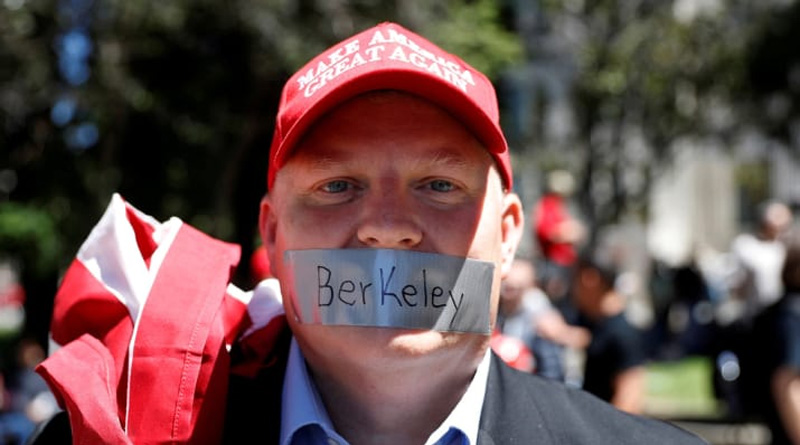 Two groups of protesters squared off at Martin Luther King Jr. Civic Center Park on Thursday afternoon, a day after conservative author and commentator Ann Coulter announced she would not be speaking on the nearby campus of the University of California, Berkeley.

Police kept the two groups separated as they shouted at each other across Allston Way.

NOW: This man just challenge people to a fight and was arrested in #Berkeley pic.twitter.com/DGwMZ2fdZV

“Illegal aliens have no rights! They’re not citizens,” shouted one of the pro-Coulter demonstrators. He was met with chants of “No ban, no wall, sanctuary for all!” and “Nazi scum!”

Coulter canceled her speech Wednesday, after the sponsoring groups — Young America’s Foundation, the Berkeley College Republicans, and BridgeUSA — withdrew their support. They did so after the university refused to provide security or facilities for the date and time chosen for Coulter to appear. UC Berkeley proposed alternate dates and times — when students and activists would be less likely to be present — and Coulter refused, citing free speech principles.

Activists from the militant left-wing group By Any Means Necessary (BAMN) celebrated Coulter’s cancellation, according to the Daily Californian, UC Berkeley’s student newspaper. They were present at the protest Thursday also. Few of the anti-Coulter protesters would speak to Breitbart News — or to anyone, instead deferring to a spokeswoman with a bullhorn. One man, however, who described himself as a 30-year Berkeley resident, Vietnam veteran, and “anti-fascist activist,” told Breitbart News: “I don’t think hate speech is free speech, and I don’t think universities should debate issues that are already settled — like was slavery wrong; are immigrants terrorists; are Latinos filthy and drug dealers, are women’s pussies to be grabbed; is global warming not real.”

He was holding a poster that declared: “The issue is not free speech. The issue is fascism.” He added: “This is a fascist government, and will go the way of Hitler.”

On the other side, Jill Maherin of Sacramento was carrying a sign that read, “Free speech for all.” She was wearing a baseball helmet in case of violence, and said she had come to Berkeley “to support [Coulter] anyway.” A few anti-Coulter protesters found their way around the police cordon and engaged the pro-Coulter demonstrators in debates, which were heated at times, but peaceful. Several of the pro-Coulter protesters wore helmets, protective gear, and body cameras, which they described as a necessary precaution after anti-Trump protesters attempted violently to disrupt a pro-Trump rally in the city April 15. Earlier, writer Gavin McInness had appeared among the pro-Coulter speakers, where he delivered the speech that Coulter had prepared for her visit.

Just read @AnnCoulter speech at Berkeley. It went great. Heading back to the airport now.

On campus, police lounged in the shade of trees around Sproul Plaza, where Coulter, before canceling, had declared she would speak if the university would not provide another venue. The plaza was the center of protests during the Free Speech Movement of the 1960s.

The university prepared for demonstrations even in Coulter’s absence, but the plaza was virtually empty, as was the sidewalk at Telegraph and Bancroft Avenues, where anti-Coulter protesters had been expected. Joel B. Pollak is Senior Editor-at-Large at Breitbart News. He was named one of the “most influential” people in news media in 2016. He is the co-author of How Trump Won: The Inside Story of a Revolution, is available from Regnery. Follow him on Twitter at @joelpollak