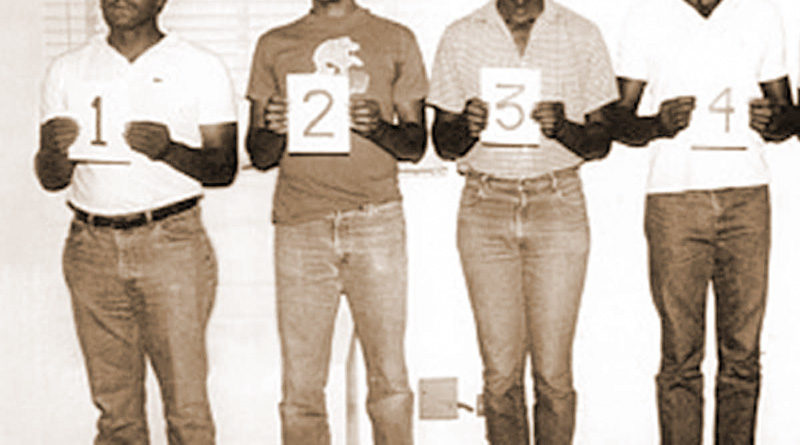 The Jews’ Media routinely vilify anyone who accurately reports incidents of black-on-white violent crime. That’s because Interracial violent crime ONLY serves their purposes when the victim is black and the perpetrator is white.

Their standard narrative is one in which innocent black victims are constantly under assault by violent white assailants and those who easily disprove this false narrative are subject to the Jews’ Media’s full wrath and fury.

To advance their false narrative, any white-on-black violent crime committed in the U.S. instantly becomes the “lead” story for days on end: Meanwhile, black-on-white violent crimes are routinely “spiked” by the Jews’ Media and receive only local coverage, if any.

Below is a small sampling of recent incidents of black-on- white murder that give Africanus criminalis its well-deserved reputation, one that the Jews’ Media has been unable to successfully obscure because of the evolution of an infinitely more honest conservative and alternative news media that includes the CofCC.

Cannon Hinnant was a five-year-old white child murdered by a next-door-negroe while riding his bicycle in Wilson, North Carolina in early August of 2020. The black baboon executed the child with a bullet to the head at close range, and there is speculation that it did so because the child rode his bicycle across the black bastard’s lawn. However, motives are difficult to ascertain on the part of the under-evolved Frontal Lobes of Africanus criminalis.

Logan Stacks was a 17 year-old white teenager who was never warned about the dangers of associating with Africanus criminalis, the Great American Nigro. He was murdered for his car by two black bastards in April of 2020 in Lancaster County, South Carolina. The two murderous apes were passengers in his car until the vehicle stopped, whereupon the two executed Logan Stacks with a firearm, and drove off in his car after dumping his body by the roadside.

Mitch Lundgaard was an Appleton, Wisconsin firefighter who was shot to death by a nigro he tried to assist when responding to a 911 call for a man having seizures at Appleton’s bus depot in May of 2019. His murderer had recently been released from another Wisconsin county jail after posting bond on a drug arrest. Fortunately, a hail of police gunfire saved the state the expense of a trial.

James Blair: This 77 year-old white man was a Sheriff’s Deputy in Simpson County, Mississippi who was murdered by a black savage he was transporting to a mental health facility in mid-June of 2020. The murderer seized Deputy Blair’s gun and needlessly shot him to death. Deputy Blair was a husband, father, grandfather and great grandfather, who continued to work into his 70s to support his grandchildren after their mother died.

Lt. Stephen Williams: This white, 23-year veteran police officer in Moody, Alabama was murdered in cold blood by black trash at a sleazy motel where Officer Williams answered a disturbance call in early June of 2020. He was a father, a husband and a former Officer of the Year in Moody, and was so highly regarded that he was posthumously promoted to the rank of Lieutenant after his murder.

Cody Holte: This 29 year-old man was a police officer in Grand Forks, North Dakota who was pointlessly murdered in late May of 2020 by a deadbeat nigra. Officer Holte responded to a call for assistance by other officers who served a Notice of Eviction to some black garbage who were being evicted by the property’s owner. The black bastard emerged from a bedroom and murdered Officer Holte without any provocation. Officer Holte was also a 1st Lieutenant in the North Dakota National Guard. He is survived by his wife, son, parents and siblings.

Dorothy Dow was an 83 year-old white woman who was beaten, stabbed and had both arms broken before being burned to death by four n*gg*rs in 2016 on her family’s blueberry farm southwest of Atlanta. The three sub-human rat-apes tortured her to death in an effort to find a “stash” of money that didn’t even exist. The last of their sentences were finally handed down in mid-June of 2020.

Jessica Whitaker was a 24 year-old white woman who was shot to death by a n*gg*r in Indianapolis, Indiana after making the mistake of arguing with a pack of them, and declaring that “all lives matter.” She is survived by her three year-old son.

Wendi Miller was an unfortunate 48 year-old white female who was with a male companion when both were murdered by a black baboon in April of 2019. The nig was in the process of burglarizing the man’s Newport Beach, California condo when the two victims happened to enter and encounter him. Being a black savage, the nig of course had to murder both the condo’s owner and this mother of two.

Norman Bledsoe was that 75 year-old white man who was savagely beaten on videotape by a 20 year-old n*gg*r in a Detroit nursing home back in May of 2020. The sub-human rat-ape beat the helpless Mr. Bledsoe for several minutes, giving him a broken jaw, broken fingers and broken ribs, injuries that eventually led to his death.

Victor King was a kindly 64 year-old white man in Hartford, Connecticut who made the fatal mistake of sub-letting his apartment to a rat-n*gg*r roommate. In July of 2020, they got into an all-too-predictable dispute over the rent, prompting the n*gg*r to kill and behead Mr. King with a Samurai sword.

John and Jay Savey were a 61 year-old father and 30 year-old son who were beaten to death by a sub-human rat-n*gg*r who attempted to steal their vehicle from the driveway of their home in July of 2020 in Windemere, Florida. The n*gg*r first beat John Savey to death with a baseball bat outside the home, then chased his wife inside where he knocked her unconscious. He then beat to death 30 year-old Jay Savey.

Charles Morgan was a 59 year-old white man and resident of Martha’s Vineyard, Massachusetts, who was traveling to Florida to visit his father. After stopping at a motel in Broward County because of rain, he made the fatal error of befriending a n*gg*r, Alphonso Washington, who had previously been convicted of murder in 1987, but was released after only four years. The rat-n*gg*r reverted to form and killed Mr. Morgan while robbing him in his motel room.

Kerry Charley was a 52 year-old auto mechanic in St. Louis, MO who worked out of his home and was murdered in July of 2019. A nigress and her apish son attempted to drive off in their vehicle without paying for repairs, and a dispute ensued in which Charley was ventilated by the son.

This 17 year-old rat-ape first shot Kerry Charley multiple times in the torso, and then shot Kerry Charley’s girlfriend twice in the back as she attempted to run away. The murderer and his mother never even called police and — like nigs the world over always do — denied ever being there.

Tim Fletcher was a 20 year-old white male who was murdered by two nigras in June of 2019, when they gunned him down while he was riding a motorcycle near Camden, Alabama. His murderers were two black bastards, aged 17 and 18, who probably did not know the victim and are believed to have engaged in some kind of “thrill-killing.” Both rat-apes were out on bond for an earlier shooting in 2019 in which both participated.

Jason Halverson was a hard-working 38 year-old white male who was gunned down in June of 2019 by two black bastards while preparing his food truck in the early morning hours in Fargo, North Dakota. One rat-savage was 19 years old and the other was 30