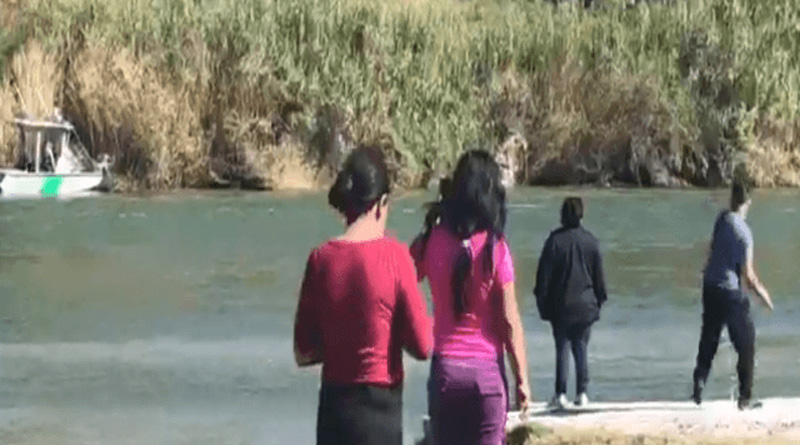 A group of individuals in Mexico hurled rocks and insults at U.S. Border Patrol Agents as they apprehended migrants after an illegal crossing.

The incident took place on the banks of the Rio Grande, not far from downtown Roma. The rock-throwing and insults were captured in a live video feed taken from the Mexican side by El Tejano.

The video captured the moment when a U.S. Border Patrol boat pulls up to the banks on the northern side to help a group of agents who were trying to arrest a man apparently resisting capture. The man was part of a group of at least four who had just crossed into Roma. In the background, voices can be heard yelling that the agents were being rough with the man. Moments later, various individuals on the Mexican side can be seen running to the edge of the river where they scream several insults and throw rocks, but fall short of their targets.

Miguel Aleman is a city under the control of the Gulf Cartel and is considered one of the main smuggling corridors into Texas. The area lacks any physical barriers other than the shallow waters of the Rio Grande, thus facilitating smuggling operations. The scene where the incident took place is the same where a CBS reporter was confronted after trying to record a human smuggling attempt in July 2018.

In recent history, Miguel Aleman served as a battleground for fierce gun battles between the Gulf Cartel and its rivals. Breitbart News recently reported on two skirmishes that killed 30 cartel gunmen just west of the city. One took place between the Gulf Cartel and a rival faction of Los Zetas called Northeast Cartel (CDN), where 24 gunmen died; the second was between the Mexican Army and Northeast Cartel Gunmen. Five gunmen and one Mexican soldier died in that clash.

Ildefonso Ortiz is an award-winning journalist with Breitbart Texas. He co-founded the Cartel Chronicles project with Brandon Darby and Stephen K. Bannon. You can follow him on Twitter and on Facebook. He can be contacted at Iortiz@breitbart.com.

Brandon Darby is the managing director and editor-in-chief of Breitbart Texas. He co-founded the Cartel Chronicles project with Ildefonso Ortiz and Stephen K. Bannon. Follow him on Twitter and Facebook. He can be contacted at bdarby@breitbart.com.