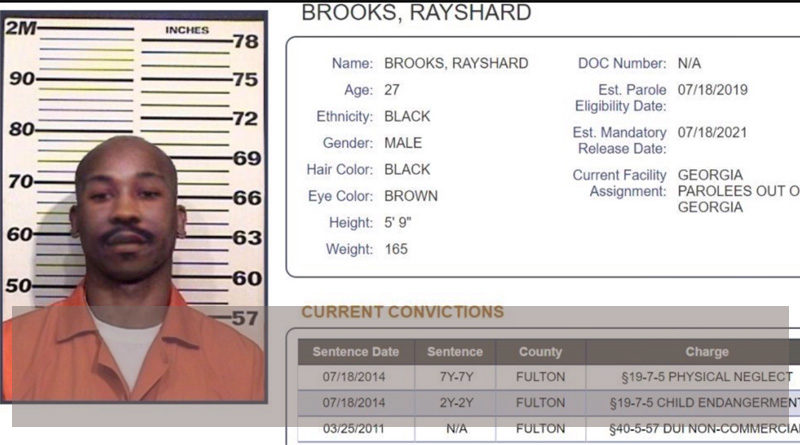 There must be a shortage of nigros deemed worthy of martyrdom by the Jews’ Media. The Jews’ Media and other purveyors of fake news have resorted to fabricating martyrs out of absolute scum-balls. The phenomenon is akin to the manner in which the Jews’ Media deified Martin Luther King.

The most recent “martyr” is Rayshard Brooks — a career criminal with at least five known aliases or “nig-names” — who was fatally shot by police in Atlanta. He has been known as Radshard Brooks, Rashad Brooks, Ray Antonio Brooks, Ray Poz Brooks, and Raysard Brooks. Under these aliases, he has committed a number of felonies in his criminal career.

You won’t see Rayshard Brooks’ rap sheet mentioned by the liars and fake news fabricators among the Jews’ Media, but here it is: In 2014, he was convicted of simple battery, false imprisonment, family violence battery, and cruelty to children. It was for these crimes that he was serving consecutive sentences when released by Clayton County, Georgia out of fear of the COVID-19 epidemic.

Prior to these offenses, in 2013 he was sentenced to seven years for receipt of stolen property, five years for criminal interference with government property, and 12 months for obstruction of a law enforcement officer.

Not too surprisingly, when he was shot by Atlanta police, he was found drunk, passed-out and blocking the drive-through lane at a Wendy’s. He then proceeded to resist arrest, strike a law enforcement officer, seize an officer’s taser, flee the scene on foot, and turn and fire the taser at the officer who shot his black ass. Good riddance!

Another piece of black garbage that has been martyred by the Jews’ Media is George Floyd, who was attempting to pass a counterfeit $20 bill at the time he was arrested by Minneapolis Police. He proceeded to resist arrest, and eventually died in police custody with Fentanyl and amphetamines in his blood.

This followed his 2009 conviction for armed robbery, forcible entry and assault with a deadly weapon that involved his sticking a handgun in the belly of a pregnant female homeowner, whom he and others were in the process of robbing and burglarizing.

Instead of martyring these sociopaths and career criminals, why don’t Black Lives Matter, Antifa and other nigs and communists run them for public office, posthumously? With the massive voter fraud routinely occurring in black areas, they’d be a cinch to get elected, and they couldn’t be any worse than the imbeciles currently running “blue” cities…