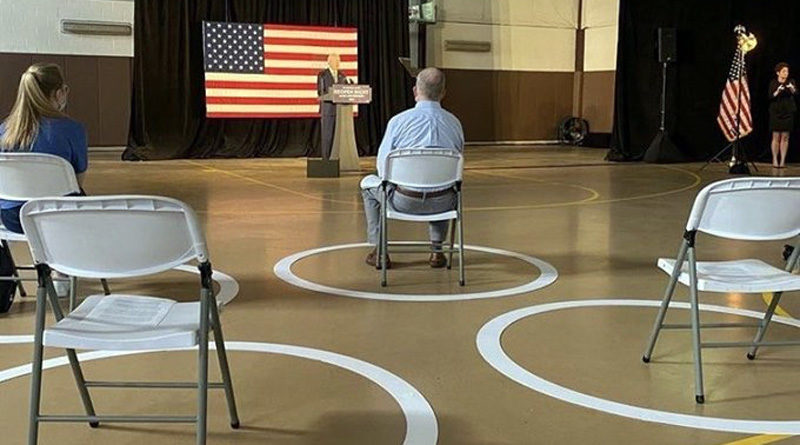 Joe Biden held an ‘event’ this week in Darby, Pennsylvania and spoke to a handful of people seated inside ‘social distancing’ circles.

According to the New York Times, Biden’s event consisted of “20 handpicked local officials, small-business owners and reporters sat in folding chairs, each placed within a large white circle taped on the floor of a recreation center to maintain — or at least encourage — social distancing.”

The New York Times reporter covering Biden’s Darby event said Biden “arrived with such little fanfare” that she “didn’t even notice him enter the room.”

“There was no introduction by an organizer to pump up a crowd that wasn’t there, as is typical with campaign events. He just stood behind a lectern, pasted with the placard “Reopen Right: Safer and Stronger,” and began reading a speech off the teleprompters,” NY Times reporter Lisa Lerer wrote.

Meanwhile, over 1 million people signed up for tickets to president Trump’s Tulsa rally scheduled for Saturday.

Joe Biden is using the Coronavirus as an excuse to hide from reporters.

“This is obviously a tactic to help him avoid errors and embarrassing, lost trains of thought, while also conveniently preventing the press corps from asking him any questions in person,” Trump campaign spokesman Tim Murtaugh said in a statement.

“At what point will Biden subject himself to the scrutiny American voters deserve when considering the next President of the United States?” Murtaugh said.