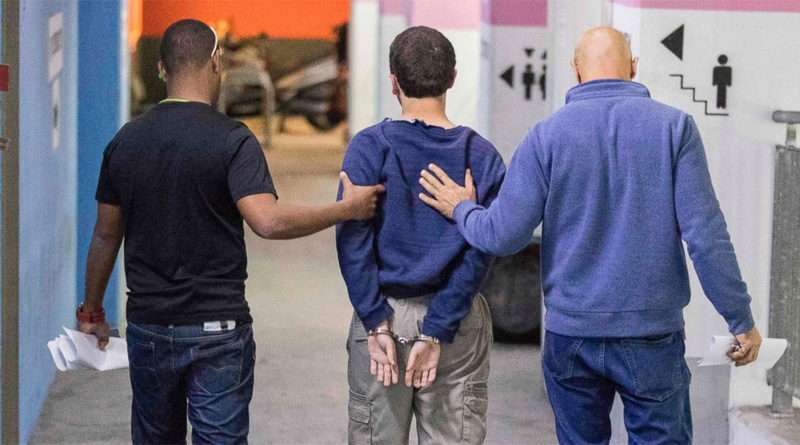 A 19-year-old Jewish man who is an Israeli-American dual citizen was arrested early this morning in Israel in connection with a series of bomb threats made against Jewish community centers and Jewish schools in the United States and other countries, police and sources told ABC News.

The suspect’s father has also been arrested for the same charges, an Israeli government official said.

Police believe the man made over 120 fake bomb threats in New Zealand and Australia and against scores of Jewish institutions across the U.S.

…Pennsylvania Attorney General Josh Shapiro, part of a group of state attorneys general who met with Trump at the White House, told BuzzFeed News Trump made confounding claims comments about the bomb threats during their sit down.

“He just said, ‘Sometimes it’s the reverse, to make people, or to make others, look bad,’” Shapiro, a Democrat, said, repeating Trump’s alleged response to questions during the meeting about the large number of bomb threats against Jewish community centers in recent months.”

'President Trump suggests anti-Semitic threats across U.S. are coming from within Jewish community'

When President Trump suggested that some of the antisemitic hate crimes could be hoaxes, the Huffington Post claimed he was echoing “white nationalists and far-right conspiracy theorists.”

The threats, causing panic at Jewish schools, synagogues, and community centers, were often blamed by Democrats and the some journalists on supporters of President Donald Trump, reports Breitbart News.

When the president suggested that some of the antisemitic hate crimes could be hoaxes, the Huffington Post claimed he was echoing “white nationalists and far-right conspiracy theorists.” (Later, and in a subsequent address to Congress, President Trump explicitly condemned the wave of antisemitic threats.)

However, the arrests thus far suggest that most of the threats were indeed hoaxes. Earlier this month, another man was arrested for false threats against at least eight Jewish community centers. The suspect was a left-wing former journalist, who allegedly used the threats as part of a campaign of revenge against a former girlfriend.

One arrest last month concerned a suspect who allegedly vandalized Chicago’s Loop Synagogue and was apparently caught on surveillance video camera. The man, already facing a March trial on unrelated charges, was charged with a hate crime.

In December, a synagogue was vandalized with feces in Santa Monica, California. No arrest has yet been made in that case.

Almost all of the other hate crimes in recent weeks and months have been false bomb threats. Now, Israeli police believe they have identified the person responsible for most of those threats, which sparked panic worldwide.