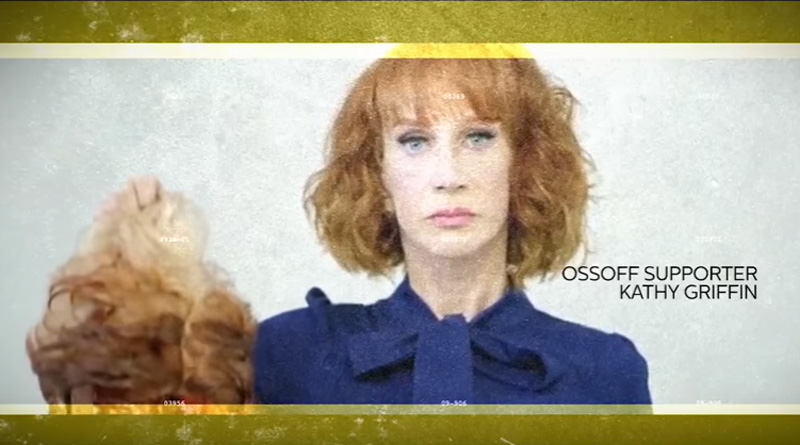 A new ad uses the controversial comedian to criticize Democrat Jon Ossoff, saying her recent controversial actions are part of a pattern of behavior from “liberal extremists” who now support the House candidate running in Georgia’s 6th Congressional District.

Griffin drew widespread condemnation this week when she was pictured holding a fake severed head made to look like President Donald Trump. The head was covered in fake blood.

“Now a celebrity Jon Ossoff supporter is making jokes about beheading the president of the United States,” a narrator intones in the ad. “It’s not funny.”

Video of Griffin holding the head appears in the ad, alongside images of liberal filmmaker Michael Moore and black-hooded protestors smashing windows.

A spokeswoman for the group running the ad, Congressional Leadership Fund, said it is not yet on air in the Atlanta suburban district. But the group, which is spending $6.5 million on the closely watched special election, could decide to use it in the weeks before the June 20 election, said Ruth Guerra.

An official with the Ossoff campaign, in a statement, called the ad a “disgrace.”

“Jon Ossoff believes what Kathy Griffin did was despicable and for Karen Handel’s Super PAC to say otherwise is a disgrace,” said Ossoff spokeswoman Sacha Haworth. “Karen Handel should immediately demand this ad be pulled before any more children have to see these disturbing images on TV.”

The use of Griffin is an unusual tack in race that has otherwise been about Ossoff’s and Republican Karen Handel’s backgrounds, national security and health care. But in a race that has been saturated in spending by the candidates and outside groups, trying a new approach (if the ad does run on TV) might be an attempt to break through with voters who have grown weary of all the TV ads on the race.

Ossoff faces Handel in a race that has drawn national attention as an early test of Trump’s popularity in a district he narrowly won during last year’s election. Ossoff is seen as a slight favorite, although both sides say the contest could still go either way.

Griffin has apologized for the picture, but the controversy has nonetheless cost her endorsements and a job co-hosting CNN’s coverage of New Year’s Eve.