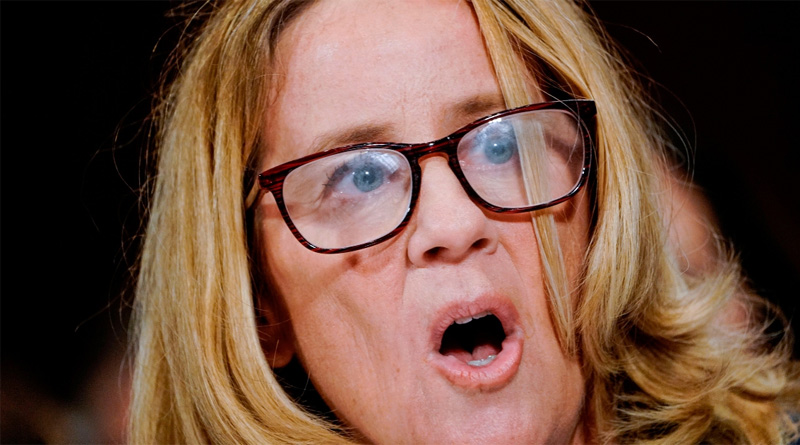 Testifying under oath before the Senate Judiciary Committee, Christine Blasey Ford (Fraud) identified herself as a ‘psychologist,’ but records indict this is a false statement under California law. Someone at Stanford University also appears to have caught the blunder and edited Ford’s faculty page.

Just one sentence into her sworn testimony before the Senate Judiciary Committee regarding allegations of sexual assault against Supreme Court nominee Brett Kavanaugh, Dr. Christine Blasey Ford may have told a lie.

After thanking members of the committee on Thursday, and while under oath, Ford opened her testimony saying, “My name is Christine Blasey Ford, I am a professor of psychology at Palo Alto University and a research psychologist at the Stanford University School of Medicine.”

The issue lies with the word “psychologist,” and Ford potentially misrepresenting herself and her credentials, an infraction that is taken very seriously in the psychology field as well as under California law.

Under California law, as with almost every other state, in order for a person to identify publicly as a psychologist they must be licensed by the California Board of Psychology, a process that includes 3,000 hours of post-doctoral professional experience and passing two rigorous exams. To call oneself a psychologist without being licensed by a state board is the equivalent of a law school graduate calling herself a lawyer without ever taking the bar exam.

According to records, Ford is not licensed in the state of California. A recent search through the Department of Consumer Affairs License Bureau, which provides a state-run database of all licensed psychologists in California, produced no results for any variation of spelling on Ford’s name. If Ford at one time had a license but it is now inactive, she would legally still be allowed to call herself a “psychologist” but forbidden from practicing psychology on patients until it was renewed. However, the database would have shown any past licenses granted to Ford, even if they were inactive.

What makes Ford’s claim even more suspicious is someone affiliated with Stanford University appears to have also been aware of the potentially damning use of the word “psychologist” and rushed to cover for Ford. DANGEROUS exclusively uncovered an archived version of Ford’s page on the school’s faculty directory. On September 10, 2015, the only archived date available, Ford’s faculty page was saved to the Wayback Machine and showed Ford listed as a “research psychologist” along with her email address and office phone number.

The most recent version of that page shows Ford listed only as an “Affiliate” in the department, with the words “research psychologist” removed along with Ford’s email address and phone number. This suggests the page was altered by someone very recently to scrub Ford’s contact information and title after she entered the national spotlight.

An archived version of Ford’s faculty listing, identifying her as a “research psychologist.”

The most recent, edited version of Ford’s faculty listing.

It is common for academics and researchers in psychology to not hold a license. California law does not prohibit anyone from engaging in research, teaching, or other activities associated with psychology if they are not licensed, so long as those individuals do not use the word “psychologist” when referring to themselves publicly.

Several searches on California’s licensing database revealed many of Ford’s colleagues in the Department of Psychiatry and Behavioral Studies at Stanford are not licensed psychologists in California, including the department chairman Laura Roberts, who identifies herself only as a professor. Of the unlicensed members of the faculty — which includes researchers, clinicians, professors, and fellows — none refer to themselves as a “psychologist” or “psychiatrist,” unless they also had a license issued in California.

This appears to include titles like “research psychologist.” There is one specific exemption to the law regarding the title “school psychologist,” which refers to school counselors who do not need to be licensed. School psychologists are legally forbidden from referring to themselves as simply “psychologists.”

Whereas the term “research psychologist” may be common in academic parlance, and permissible within accredited institutions, the issue seems to be publicly presenting oneself under any title containing the word “psychologist” if a person is not licensed. Ford is a professor and a researcher, but not a psychologist. Section 2910 of the law states, “This chapter shall not be construed to restrict the practice of psychology on the part of persons who are salaried employees of accredited or approved academic institutions, public schools, or governmental agencies, if those employees are complying with the following (1) Performing those psychological activities as part of the duties for which they were hired. (2) Performing those activities solely within the jurisdiction or confines of those organizations. (3) Do not hold themselves out to the public by any title or description of activities incorporating the words ‘psychology,’ ‘psychological,’ or ‘psychologist.’”

It is unknown why Ford, 51, a seasoned academic in the field of psychology would have made such an obvious mistake unless she was unaware of the law or trying to intentionally mislead the public and members of the committee about her credentials in the field of psychology. Her bizarre testimony often veered off into psychological jargon about brain chemistry, memory storage, and how trauma effects the brain, analysis one would expect from a clinical psychologist, rather than an academic involved in research. When asked by committee members of her most vivid memory from the attack that allegedly occurred nearly 40 years ago, Ford responded, “Indelible in the hippocampus is the laughter, the uproarious laughter between the two [men], and their having fun at my expense,” referring to the part of the brain mainly associated with memory. When discussing her trauma, Ford replied, “The etiology of anxiety and PTSD is multifactorial. [The incident] was certainly a critical risk factor. That would be a predictor of the [conditions] that I now have … I can’t rule out that I would have some biological predisposition to be an anxious-type person.”

Yet, Ford’s academic focus for years has been statistics, not memory or trauma. To look at her as some sort of expert in this area would be like asking a podiatrist about heart disease simply because he’s in the medical field. Still, the media ate it up. Hours after her testimony ended, various mainstream media outlets falsely identified Ford as a “psychologist” and praised her approach to science during the hearing, calling the statistician an “expert” on issues more closely related to clinical psychology.

The Senate judiciary committee is set to decide Friday on a date for Kavanaugh’s confirmation vote. If Ford committed perjury, she could face up to five years in federal prison.

Chadwick Moore is a journalist, political commentator, and editor-in-chief of DANGEROUS, currently working on his first book. He tweets at @Chadwick_Moore.

5 thoughts on “Is Christine Ford a Doctor? — There Are NO RECORDS to Prove This in State of California Database”