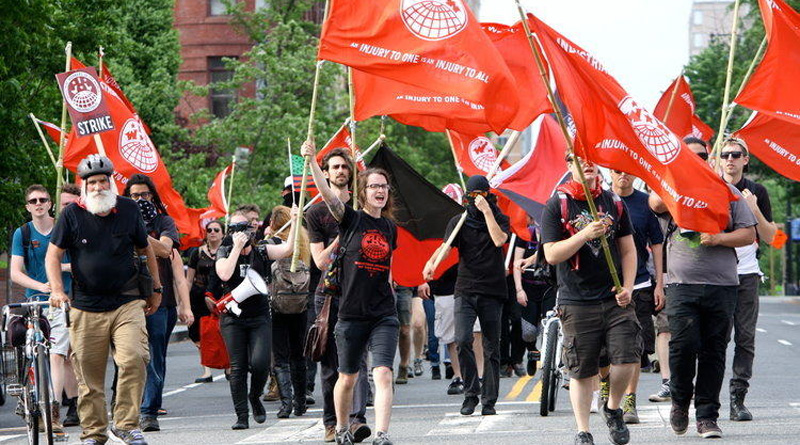 It was almost like a smaller, less intense recap of inauguration day as socialist Wobblies waving red Industrial Workers of the World and the black masked anarchist ranks of ANTIFA marched up to the line of police officers standing in attention outside the H. Carl Moultrie Courthouse in Washington DC on May 1st.

The demonstrators ended the day of marches and demonstrations for workers and immigrants with a gathering to show solidarity with the “12th and L” Defendants—the 200 plus activists arrested in DC protesting Trump’s inauguration at the corners of 12th and L Streets—to demand that their charges be dropped.

“This Thursday, not only were more people indicted, but they added seven new felony charges to everyone,” said one of the event’s organizers through a megaphone (many who are involved with the case wished to be named).

Last month, a Northwest D.C. residence was raided in connection with the case and one of the occupants of that home, Dylan Petrohilos (below), along with several others who were not arrested on January 20, have since been indicted for conspiracy to riot.

“Essentially the allegations against me are based on facilitating a public meeting for public protest. Prosecuting people based on participation in a public protest, at the federal level, seems like something that would happen in an authoritarian society,” Petrohilos said over the phone. “I would say they are a clear violation of First Amendment rights.”

The couple hundred people arrested on inauguration day have been charged with multiple accounts of felony rioting, conspiracy to riot, property destruction, and assault on a police officer. “I think what’s important to highlight is that many protesters are facing seventy five years in prison,” Petrohilos said. “For most of these people that’s the rest of their lives, for First Amendment-protected activity.”

The inciting or urging to riot charges are based on the protesters “not exercising multiple opportunities to leave the black bloc, choosing instead to stay with the black bloc, thereby allowing individuals in the black bloc to commit further acts of destruction.” They are also being charged for bringing “face masks, gas masks, and goggles to eliminate or mitigate the effectiveness of crowd control measures that might be used by law enforcement.”

Although there has been at least one guilty plea, many of the defendants are pledging to refuse to accept any deals. “We do not concede that plea bargains such as this legitimize the charges against us and we will continue to fight our cases and demand trials. The risk of imprisonment, fines, and probation is far less meaningful than giving even tacit legitimacy to these charges,” a statement from around 20 defendants read.

But with the ramped up charges, the defendants acknowledge that things are looking rather grim. “I wasn’t scared in January. I’ve fought bullshit charges before,” said one seasoned activist who is now facing charges. “I’m getting scared now.”

At the same time as these defendants protested their charges in front of the courthouse, another group of ANTIFA protesters in Portland captured the attention of the media by breaking windows, setting small fires, and overturning newspaper boxes.

But everything in the District was pretty peaceful—during the much larger march, which the IWW and ANTIFA activists were part of before breaking of to come to the courthouse, there were almost two arrests resulting from an argument between a flag-waving protester and a white collar worker who stole the flag and ran away. Police scolded both parties but no arrests, ultimately, were made.

One protester shouted, “Fuck the DA! Fuck the police! We won’t let them rest in peace!” which erupted into a chant. A second line of police arrived in single file on bicycles and formed an additional line of security between the courthouse and the protesters, who were now dancing in a circle. Legba Carrefour of the DC Legal Posse was clapping and jeering on the crowd, his silver hair bouncing in the wind, and fist pumping the air as he led the crowd in an anti-capitalist chant.

“I’m not even joining this circle” one of the defendants who came to the rally said, fearing that he might be hit with additional charges—based on dancing towards an officer or something.

“It’s clearly blatant intimidation. The state still does not have individualized evidence about the vast majority of those that are charged,” the organizer said through her megaphone.”This is a collective punishment, and a way of putting our ideologies on trial, and making sure resistance under Trump is trampled.”

Two young black men came out of the courthouse and stopped to look at the political spectacle unfolding around them.

The IWW and ANTIFA protesters are mostly white American citizens with middle class backgrounds. But they are trying to build solidarity with those who face even greater risks when confronted by the state, such as the immigrant groups leading the larger marches winding through the city and the two young black men walking out of the courthouse. The protesters began to cheer for them.

One of the young men took the mic.