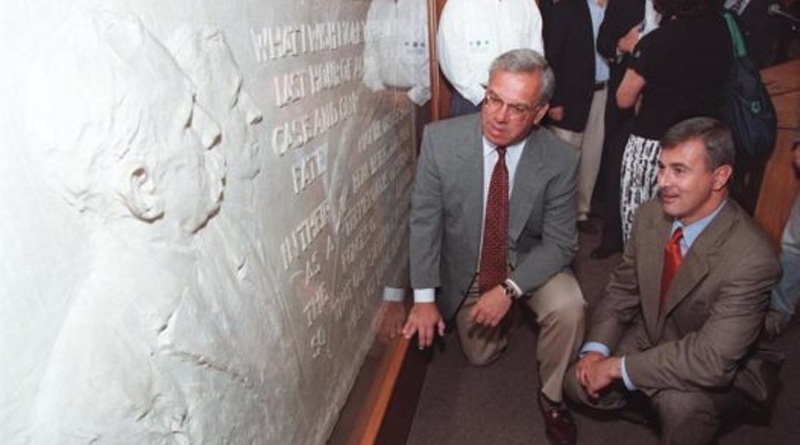 … But there is one illuminating episode that has gone all but unmentioned in the various tributes to Menino. In 1997, the city’s first Italian-American mayor officially accepted on behalf of the city a sculpture of Sacco and Vanzetti, the Italian immigrant anarchists executed 70 years earlier after a trial that many have long held was a travesty of American justice.

Sacco & Vanzetti were two anarchist terrorists who became a colossal cause célèbre for the global left after they were arrested in the murder of two guards and the robbery of $30,000 in 1920.

You hear a little less and less about them every year because the evidence has perpetually piled up ever since their execution in 1927 that Sacco indeed pulled the trigger and Vanzetti was in on the caper.

For example, in 2005 the Los Angeles Times published an article about a newly found letter written in 1929 by Sacco & Vanzetti’s biographer, leftist novelist Upton Sinclair. It’s one of those kind of upside down articles:

Sinclair Letter Turns Out to Be Another Expose

Note found by an O.C. man says ‘The Jungle’ author got the lowdown on Sacco and Vanzetti.

Finally in the 7th and 8th paragraphs you find out what the lowdown on Sacco and Vanzetti is:

Soon Sinclair would learn something that filled him with doubt. During his research for “Boston,” Sinclair met with Fred Moore, the men’s attorney, in a Denver motel room. Moore “sent me into a panic,” Sinclair wrote in the typed letter that Hegness found at the auction a decade ago.

“Alone in a hotel room with Fred, I begged him to tell me the full truth,” Sinclair wrote. ” … He then told me that the men were guilty, and he told me in every detail how he had framed a set of alibis for them.”

But this discovery has not exactly been front page news. For example, the New York Times, as far as I can tell, has never reported it. There has just been too much late-breaking Emmett Till frontpage news crowding it out, I guess.

In general, there has never been any kind of accounting or apology by Respectable Opinion regarding their long campaign of disinformation and distortion.

But since sculptures are being toppled Taliban-style in America these days for being Bad, isn’t it about time for the Boston Public Library to take down its Sacco and Vanzetti memorial and stop artistically commemorating the murderers?

By the way, the town of Braintree, MA in 2010 dedicated one of the rarer types of memorials: to the victims of crime.

This monument is dedicated to the memory of Frederick Albert Parmenter and Alessandro Berardelli. On April 15, 1920, while performing their duties for the Slater & Morrell Shoe Company, these men lost their lives near this location, victims of an armed robbery. While the case against the accused, Nicola Sacco and Bartolomeo Vanzetti, received international attention, history has forgotten the names of these victims.