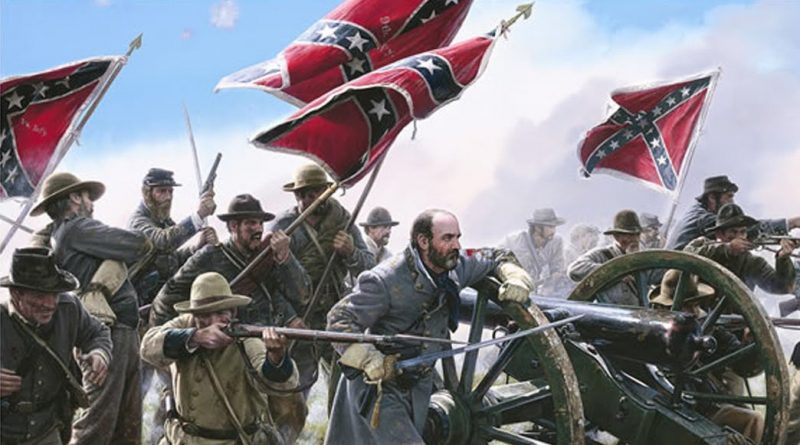 Like Hank Williams fantasized in his famous song, it’s fun to speculate about what America might be like if history had taken a correct turn, and the South had won the War Against Yankee Aggression and then seceded.

Two Jew-boys who produced the Game of Thrones are allegedly planning a new cable series on HBO, to be titled “Confederate.” It is rumored their new series will speculate about what America would be like if the South had successfully seceded from the Union, and slavery were still legal. Clearly, their “speculations” will be very different from my own, which follow…

First of all, if the good guys had won, there would be no holiday celebrating Martin Luther King, and King’s FBI Files would have been released and not redacted in any manner. The truth about this disgusting communist and pervert would finally penetrate even the skulls of the ghetto-dwellers, race-hustlers and frauds that routinely invoke his name.

Instead, America would have established real holidays to celebrate our true National Heroes, such as George Washington, Robert E. Lee, Jefferson Davis, Nathan Bedford Forrest, George Patton and Ronald Reagan. All those arbitrary three-day weekends created by Congress would end: Holidays would be celebrated only on the birthdays of these genuine, American heroes.

Taxation would be used exclusively to fund a Public Purpose: Use of the Taxing Powers as a means to achieve transfers of wealth would be unconstitutional, a restriction that would apply to Foreign Aid, as well.

Welfare would have become a true “safety net” and not a way of life. There would be semi-annual drug-testing of all welfare “Heads of Households,” and a positive test result for any illegal substance would be sufficient to permanently remove these scammers from the welfare rolls.

Once again, America would have become an avowedly Christian Nation: Moreover, anyone running for public office or appointed to public office would be required to give a detailed description of the churches they attended and the years they attended them. These would substitute for the detailed financial disclosure statements usually required.

Using its powers under Article 3, Section 2, Congress would have removed Federal Court jurisdiction over school assignment cases, Congressional and state redistricting, and any other alleged inequities involving race, ethnic identity or gender.

Likewise, any member of the Federal Jewdiciary who attempted to create law — rather than merely apply the law — would be subject to summary removal from office by the President, or impeachment by a 51% vote of Congress. This would become our 28th Amendment to the Constitution.

Mapp v. Ohio, Escobido v. The United States, Brown v. Board and any Congressional Redistricting cases would all be considered “judge-made” law, since each is a blatant attempt by federal judges to usurp the functions of Congress and all state legislatures by writing “codes of conduct” for them. They also perpetuate the lie that federal judges are less biased or “political” than members of a deliberative body.

Anyone engaging in voter fraud would face a mandatory sentence of three years and a fine of $1,000 on each count. Those found obstructing justice in such cases would serve the same sentences as those convicted, and in the same penal institutions.

Term Limits for Congressional office-holders would not only be Constitutional, they would become the 29th Amendment to the Constitution. Also, any member of a state’s Congressional Delegation could be Recalled by a 55% majority of voters at any properly scheduled election.

A petition by any citizen with evidence of a pattern of “fake news,” lying, or disinformation by any electronic news media outlet would be sufficient to compel the FCC to investigate such allegations. If found to be true, revocation of that offender’s FCC License would be mandatory.

Any law enacted by Congress would have a five-year “Sunset Provision,” requiring that it be re-enacted by a Majority of both Houses of Congress and signed into law by the President every five years of its existence. Failure to re-enact would constitute automatic repeal.

There would be no Department of Education, no Labor Department, and no Equal Employment Opportunity Commission. The EPA would be staffed with scientists, not radical environmentalists, and they would have no authority beyond making recommendations to Congress.

America would have become a sanctuary to white people, so long as they pledged allegiance to democratic and Republican principles in the Constitution, and were financially self-sufficient. Those who betrayed their Oath of Allegiance — like the Jewish communists who emigrated here from Europe in the first half of the 20th Century — would be hastily deported to some far corner of the globe, preferably one populated by cannibals or head-hunters.

Immigrants who have gone without employment for two years would be deported to their nations of origin, along with their families, pets, friends and associates. (Just kidding…)

Those who interfere with immigration authorities in any manner would become subject to deportation, as well. This would apply equally to clergy or political authorities that defy immigration laws and harbor illegal immigrants, particularly those who attempt to create “sanctuaries” for them.

Illegal immigrants would be subject to asset forfeiture by the states in which they reside. Return of such assets would be exclusively at the discretion of the individual states involved, and done so only after all debts and penalties against them have been assessed. The residual could be refunded to them in their new nations of residence.

Finally, Capital Punishment would be used to a far greater extent for First Degree Murder and crimes that involve significant amounts of violence or murderous intentions. Each capital case would be allowed one Habeas Corpus appeal to the Supreme Court: If rejected, only a commutation by the state’s Governor could stop a scheduled execution.

This would mean an end to absurdly long and frivolous appeals in capital cases, some of which have taken 30 years to effectuate. As Hank Junior put it so eloquently, probably in reference to the case of Ted Bundy:

“I’d make my Supreme Court down in Texas
And we wouldn’t have no killers gettin’ off free:
If they were proven guilty, then they would swing quickly,
Instead of writin’ books and smilin’ on T.V.”