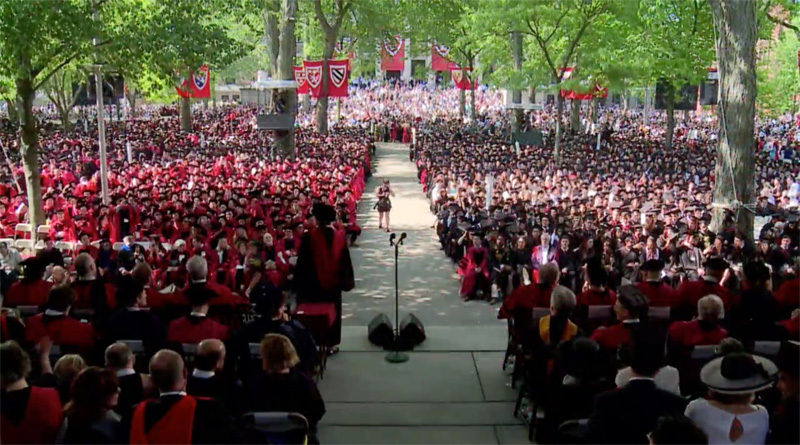 This must be a small graduation ceremony.

In the name of progress, Harvard University will segregate graduation ceremonies based on race.

“Aside from studying and taking grueling tests, if you’re a minority, the outer pressures of society make the already challenging coursework even more difficult. Knowing this, Black members of the class of 2017 decided to form an individual ceremony. It’s the first of its kind at the school in recent memory and took nearly a year to plan,” reports BET. “The separate graduation is an effort to highlight the aforementioned struggles and resilience it takes to get through those.”

Shockingly, this is not as rare as it may seem. As noted by BET, “Stanford, Temple and Columbia all have Black student graduations.”

“This is an opportunity to celebrate Harvard’s black excellence and black brilliance,” Michael Huggins, who is graduating with a master’s in public policy from the Harvard Kennedy School, said. “It’s an event where we can see each other and our parents and family can see us as a collective, whole group. A community.

“This is not about segregation,” Huggins added. “It’s about fellowship and building a community. This is a chance to reaffirm for each other that we enter the work world with a network of supporters standing with us. We are all partners.”

Woods said that the graduation ceremony places a focus on blacks who have established themselves as leaders in a fraught environment.

“It speaks volumes that there has never been a black graduation ceremony until now,” she said. “We created this from scratch, because for me, for many of us, we are not here alone. I carry with me the dreams and desires of my family. And as a first-generation, I know I am here to change the trajectory for all of us.”

More than 120 students have registered to partake in the ceremony, which will be held at Holmes Field, near the Harvard law School in Cambridge, Massachusetts. The students raised more than $27,000 to pay for the ceremony and a reception that will follow. The student body hopes to organize a similar ceremony for black undergraduate students at Harvard next year, Huggins said.

The graduate students still plan to participate in the school’s main ceremony later this month. Last year, Harvard was named the No. 2 best college for African-Americans by Essence and MONEY magazines.