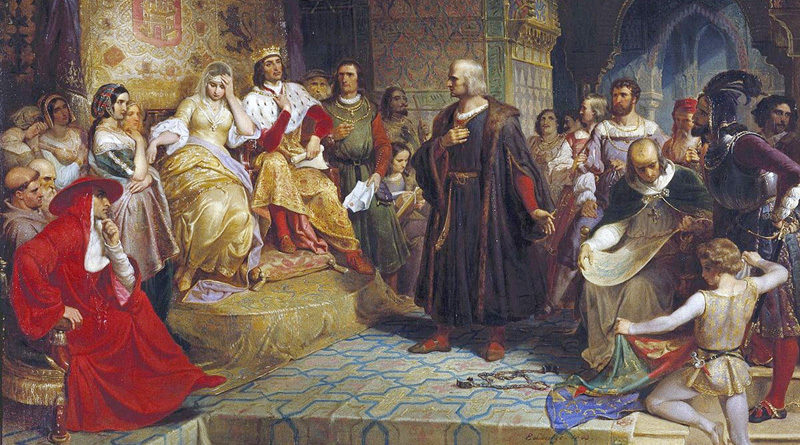 I’ve been writing VDARE.com’s Columbus Day round ups since 2008. Normally not much happens in the Columbus line between one Columbus Day and another.

This year’s Columbus Day, October 12, is different. This year Columbus has been part of the same anti-white Monumental Destruction that’s been going on as a result of the George Floyd Hoax. You see, Columbus is a dead white male, and that makes whatever he did bad.

The great Patrick J. Buchanan has written about it here:

In Richmond, Virginia, a statue of Christopher Columbus, who generations of American children were raised to revere as the intrepid Italian explorer who discovered the New World, was pulled down and thrown into a lake.

In Boston, the Columbus statue was beheaded.

For even as the fireworks were exploding on the Mall, a Baltimore mob was tearing down, smashing up and dumping into the Inner Harbor a landmark statue of Christopher Columbus.

That statue stood next to the Baltimore neighborhood of Little Italy and had been dedicated in 1984 by President Ronald Reagan.

In Chicago, mostly black rioters tried and failed to topple a Columbus statue…which was then removed for them by the Chicago authorities [Christopher Columbus statue removed in Chicago following protests, Guardian, July 24, 2020]

Extremely significant point: If the USA had been conquered and occupied by a hostile power, the Geneva Convention would forbid the destruction of its monuments.

On the 400th anniversary of Columbus‘s voyage of discovery, October 12, 1892, Chauncey Depew, a famous lawyer, statesman and public speaker, made a speech that became known as the “Columbian Oration” at the Columbian Exposition in Chicago, which was itself a celebration of Columbus.

This day belongs not to America, but to the world. The results of the event it commemorates are the heritage of the peoples of every race and clime. We celebrate the emancipation of man. The preparation was the work of almost countless centuries; the realization was the revelation of one. The Cross on Calvary was hope; the cross raised on San Salvador was opportunity. But for the first, Columbus would never have sailed; but for the second, there would have been no place for the planting, the nurture, and the expansion of civil and religious liberty. …

All hail, Columbus, discoverer, dreamer, hero, and apostle. We here, of every race and country, recognize the horizon which bounded his vision and the infinite scope of his genius. The voice of gratitude and praise for all the blessings which have been showered upon mankind by his adventure is limited to no language but is uttered in every tongue. Neither marble nor brass can fitly form his statue. Continents are his monument, and unnumbered millions, present and to come, who enjoy in their liberties and happiness the fruits of his faith, will reverently guard and preserve, from century to century, his name and fame. [More]

There’s 5000 words omitted there, but Depew’s point is that Columbus’s discovery of America was good thing not only for America, but for the world.

By 1992, the 500th anniversary “anti-racism“ was already a Thing, and Columbus was the villain who had brought whiteness to the North and South American continents:

Up and down Latin America today, the 500th anniversary of Columbus’s arrival in the Americas was marked by tight security around Spain’s embassies and by calls for cultural renewal by Indian peoples.

To highlight the achievements of pre-Columbian cultures, indigenous peoples from around the Americas converged today near Mexico City at the great Pyramids of the Sun and the Moon. At this Aztec monument, they erected steam lodges, smoked peace pipes and chanted Indian prayers.

Indians In Protest Against Columbus, by James Brooke, NYT, October 13, 1992

The indigenous peoples from north of the border were in Mexico because that’s the farthest north pre-Columbian civilization, as represented by cities and stone temples, got.

I supposed most Woke haters of whiteness don’t know anything about the cannibalism, because it’s not taught in schools, which insist on telling the boring parts of history and leaving out the interesting ones. G. K. Chesterton wrote about this in 1925:

Take for example the Aztecs and American Indians of the ancient empires of Mexico and Peru. They were at least as elaborate as Egypt or China and only less lively than that central civilization which is our own. But those who criticize that central civilization (which is always their own civilization) have a curious habit of not merely doing their legitimate duty in condemning its crimes, but of going out of their way to idealize its victims. They always assume that before the advent of Europe there was nothing anywhere but Eden.
A 1992 movie about Columbus was called 1492: The Conquest Of Paradise.

[Poet Algernon Charles] Swinburne, in that spirited chorus of the nations in ‘Songs Before Sunrise,’ used an expression about Spain in her South American conquests which always struck me as very strange. He said something about ‘her sins and sons through sinless lands dispersed,’ and how they ‘made accursed the name of man and thrice accursed the name of God.’ It may be reasonable enough that he should say the Spaniards were sinful, but why in the world should he say that the South Americans were sinless?”

The online Britannica defines the “Columbian Exchange” as:

the largest part of a more general process of biological globalization that followed the transoceanic voyaging of the 15th and 16th centuries. Ecological provinces that had been torn apart by continental drift millions of years ago were suddenly reunited by oceanic shipping, particularly in the wake of Christopher Columbus’s voyages that began in 1492. The consequences profoundly shaped world history in the ensuing centuries, most obviously in the Americas, Europe, and Africa. [Links added]

Europe got potatoes, tobacco, turkeys and beaver pelts in this exchange. Indians got, much against their will, civilization. And the Historic American Nation got a place to be born.

This is what Chauncey Depew, speaking 80 years earlier, meant when said of Columbus “Continents are his monument.”

A white St. John’s University teacher in Maryland may lose his job for explaining this:

For helping his students think critically about the tradeoffs in the “Columbian Exchange,” Richard Taylor has been deemed to violate St. John’s University’s “Bias, Discrimination, and Harassment” policy.

The adjunct professor of history, a Marine Corps reserveman and former New York City cop, will learn his fate in a meeting with interim Dean Gina Florio on Friday, according to the Foundation for Individual Rights in Education.

Professor found guilty of harassment for asking students if global trade has been good overall, by Greg Piper, The College Fix, October 8, 2020

Apparently what triggered the students was a reference to slavery. Slavery was part of the “Exchange” because there was trade in slaves by Columbus himself, and later the African Slave Trade that you’ve heard so much about.

Taylor put this down as a negative, obviously, but was attacked in class by students who felt, according to The College Fix, that “slavery could never be justified” when Taylor’s PowerPoint asked, in a final, “discussion prompt” slide “Do the positives justify the negatives?”

What white people’s navigational arts, starting with Columbus, added in the Columbian Exchange was freedom and Christianity, as Depew pointed out in 1892. We didn’t invent slavery, we invented ships, and freedom under law.

[T]here is no place for industry; because the fruit thereof is uncertain: and consequently no culture of the earth; no navigation, nor use of the commodities that may be imported by sea; no commodious building; no instruments of moving, and removing, such things as require much force; no knowledge of the face of the earth; no account of time; no arts; no letters; no society; and which is worst of all, continual fear, and danger of violent death; and the life of man, solitary, poor, nasty, brutish, and short.

Columbus fought cannibals, and if he captured Indian slaves, he sent them to European masters who wouldn’t even think of eating them.

The Columbian Exchange was a net benefit for the Indians, for the world, and most of all, for the Historic American Nation.