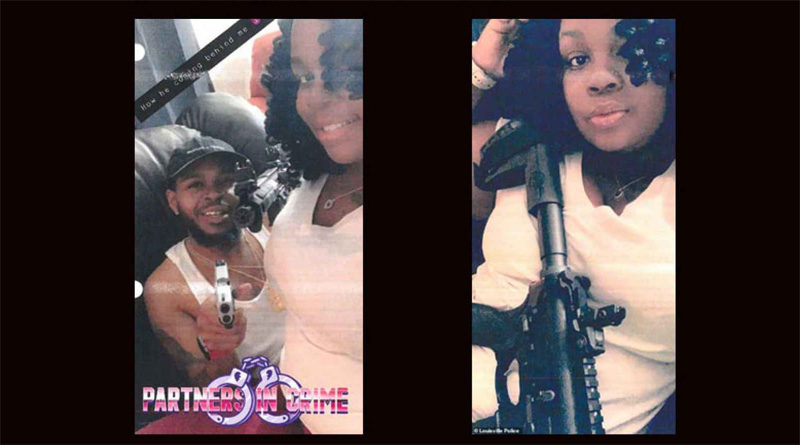 How Oprah Winfrey and Black Lives Matter are colluding in a plot to perpetrate a social injustice.

Breonna Taylor was a 26-year-old emergency-room medical technician. Her death on March 13, 2020 at the hands of Louisville, Kentucky police officers became a marquee case for the Black Lives Matter movement. One of the most celebrated figures in American life, Oprah Winfrey, took up Breonna’s cause and bought 26 giant billboards – each one representing a year of her short life. The billboards featured Taylor’s image and the words: “Demand that the police involved in killing Breonna Taylor be arrested and charged.”[1] A website called UntilFreedom.com, describing itself as “an intersectional social justice organization rooted in the leadership of diverse people of color to address systemic and racial injustice,” joined Oprah in carrying out the initiative.[2]

In addition to the billboards, Oprah put Taylor’s photo on the cover of her best-selling monthly magazine “O,” which had featured Oprah herself on the cover of every issue since its inception twenty years before.[3] For this special issue, Oprah wrote a moving editorial tribute to Breonna’s life, which contained this account of the incident that ended her life: “We know how Breonna died. March 13. Louisville police storming into her apartment in the middle of the night. No uniforms. No ‘This is the police!’ Terrifying Breonna and her boyfriend, Kenneth Walker.”[4] 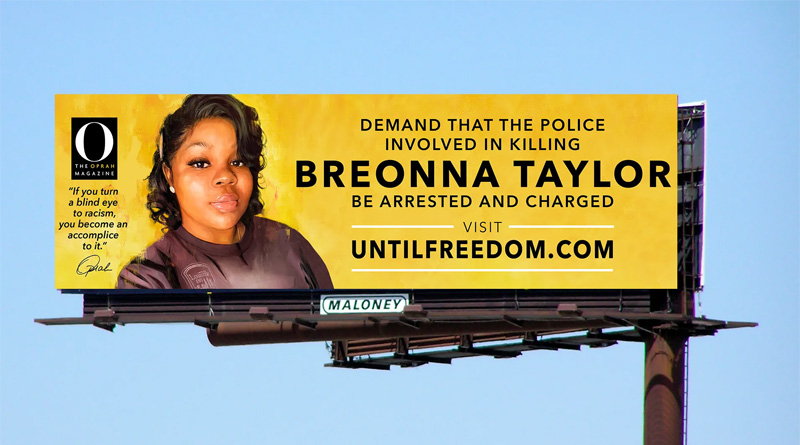 Well, not exactly. Along with other sources available, the CNN account to which Oprah provided a link, tells a more complicated story.[5] The raid on Taylor’s apartment was one of five taking place that night, all of them included as suspected distribution centers for a crack cocaine dealer named Jamarcus Glover.[6] Glover had been Taylor’s boyfriend two years previously, and she had kept in touch with him. According to The New York Times, after they first became a couple in 2016, Taylor agreed to rent a car for Glover and ended up interviewed in a murder investigation. A man was found shot to death behind the steering wheel of that car, and drugs were also found.[7] Yet Taylor kept up her close relationship with the drug dealer and continued to provide valued services to his drug operation.

Drawing on the Times investigation, former prosecutor Andrew McCarthy summarized the continuing relationship: “In the years that followed, Glover was repeatedly arrested on drug charges, and Taylor arranged bail for him and one of his confederates on at least two occasions. Weeks before the fateful March 2020 raid, when Glover was in custody after yet another arrest, they were recorded exchanging intimacies on the phone. After that, police surveillance established that Glover continued to make regular trips to Taylor’s apartment, and Taylor herself was seen outside a house that investigators say was part of the drug trafficking operations.”[8]

Taylor’s car was seen in the vicinity of a “trap house” associated with Glover several times, and was photographed in front of that location in mid-February. “Trap houses” are used for storing drugs. Police also had evidence that Glover used Taylor’s address to receive parcels sent by mail. He was seen leaving her apartment carrying a package in mid-January.[9]

Glover was known to make frequent trips to Taylor’s apartment; he had visited her the month before the raid, and he used her apartment as a mailing address where he commonly received packages as well as important documents like bank statements.[10] This led police investigators to think her house might have been part of his drug network.[11] As it turned out there were no drugs in Taylor’s home, but this knowledge came as a result of the raid and therefore too late.

In the hours after he was arrested in a separate raid on March 13, Jamarcus Glover made repeated phone calls from the jail in which he was being held. In those calls, he informed a man that he had exchanged text messages with Taylor the day before about items which he had shipped to her apartment.[12] Glover also said that Taylor was “hanging onto my money,” while he tried to come up with enough cash to post bond.[13] According to Glover, Taylor was holding $8,000 of the drug dealer’s money.[14]

The other man in Breonna Taylor’s life in March 2020 was her new boyfriend, 27-year-old Kenneth Walker, a low-grade drug dealer. After Taylor’s death on March 13, investigators recovered, from Walker’s phone, text messages in which Walker discussed selling “pills” to Hooters waitresses. In another text conversation, he transmitted an image of a bag of marijuana which he advertised as “Cali High Grade Premium Cannabis 1LB.” And in other messages still, Walker offered to sell half ounces of marijuana for $25, or two “zips” – a slang term for “ounces” – for $260. Moreover, in a group chat where Walker discussed plans to rob someone, he asked how much “bread” the intended target had in his possession. When another participant in the chat asked whether Walker would need to do a certain amount of “homework” (i.e., preparation) for the theft, Walker replied that he himself was in the habit of doing his “homework” in advance of “every mission.”[15]

Investigators also recovered photos of Taylor and Walker posing with firearms. In one photo stored on Walker’s phone, a smiling Taylor stood next to Walker as he held a Glock 9mm handgun and a Springfield Saint AR-15. The picture was accompanied by a caption that read, “Partners in crime,” along with a cartoon rendering of handcuffs. In text messages that were also recovered from Walker’s phone, Walker stated that his Glock was not registered to him, and that he had purchased it from a “white boy.” Taylor had sent an image of herself holding the AR-15 in a text message to Walker.[16]

At 12:30 AM, on the morning of March 13, three officers appeared with a “no knock” warrant at the door of Taylor’s apartment.[17] However, their supervisors told them to knock anyway and announce that they were police, which they later claimed to have done, although Walker, who was also in the apartment, claims not to have heard them.[18] When they got no response from anyone inside the apartment, the officers used a battering ram to break down the door.[19]

Either roused by the officers’ announcement or by the sound of the breaking door, Taylor and Walker got out of bed and went to the entrance hall. Walker was carrying a weapon that was legally registered.[20] He fired at the intruders in the darkness, hitting Sgt. Jonathan Mattingly in the leg.[21] This triggered a hail of bullets from the officers, six of which hit Taylor, and killed her.[22] Contrary to the Black Lives Matter accusations, social media posts and media reports claiming that Taylor had been shot “in her sleep,” she actually died on the floor of her hallway where she followed her new boyfriend Kenneth Walker.[23]

If this was a racial killing, why not shoot the boyfriend, who was armed and also black, instead of the unarmed woman? It is more likely that the boyfriend jumped out of the line of fire after pulling the trigger, but Taylor did not.

Contrary to the cries of the lynch mob seeking to destroy the lives of police officers and a black Attorney General for doing their jobs, Taylor was not killed because she was black. Nor was she innocent in creating the situation that led to her death. The police were at her house because she was an accomplice to a known drug dealer. One can understand how the heart can lead perfectly decent people to be drawn into indecent situations, but Breonna Taylor had serious warnings – the dead body in the car she had rented for her boyfriend should have been sufficient – to cease providing assistance to a dangerous criminal.

Anyone looking at this incident with hindsight can see multiple parts of the search plan and pre-raid investigation that were faulty and could have been modified to prevent the tragedy that occurred. What is difficult for an impartial observer to understand is how any of the officers, obviously fearful for their lives and acting in the dark, could be held criminally accountable for the death of Breonna Taylor. Amidst the public uproar over the incident, the Louisville city council passed “Breonna’s Law,” legislation that banned no-knock warrants and required officers serving search warrants to wear body cameras.[24] How would either of these reforms have had a positive effect on the outcome?

Many entertainers, celebrities, athletes, and political figures became outspoken champions of the effort to win “justice” for Breonna Taylor and her family. During a post-game interview on June 23, 2020 NBA basketball star LeBron James demanded that the police officers involved in Taylor’s death be arrested.”[25] In the Women’s National Basketball Association, numerous players dedicated their season to Taylor and wore her name on the backs of their jerseys.[26] On June 5, Democrat Senator Cory Booker tweeted that Taylor’s “life was tragically taken by police and we will not stop marching for justice until it’s served for her and her family.”[27] That same day, Senator Kamala Harris lamented that Taylor’s life had been “horrifically” snuffed out, and she urged Americans to “keep up the calls for justice.”[28]

On September 18, Kentucky Attorney General Daniel Cameron announced that a grand jury had decided not to file homicide charges against any of the three officers in connection with Taylor’s death, on grounds that they were justified in having used their weapons to defend themselves.[29] Brett Hankison, however, was indicted on three counts of “wanton endangerment” because several of the shots he fired penetrated the walls separating Breonna Taylor’s apartment from that of the next-door neighboring family.[30] In response to the failure to recommend a homicide indictment, massive Black Lives Matter protests erupted in Louisville, where two police officers were shot, and in numerous other cities across the country.[31]

Attorney General Cameron, a black Republican, was condemned by the left after making his announcement. Among his more vocal critics was rap star Megan Thee Stallion, who appeared on Saturday Night Live and played an audio clip in which leftwing activist Tamika Mallory said, “Daniel Cameron is no different than the sellout Negroes that sold our people into slavery.” Cameron responded by calling it “disgusting” that “someone would get on national television and make disparaging comments about me because I’m simply trying to do my job” – i.e., trying to “stand up for truth and justice as opposed to giving into a mob mentality.”[32]

But a mob mentality is the very air that Black Lives Matter breathes.

Thanks to the Black Lives Matter successful propaganda campaign and the efforts of celebrities like Oprah Winfrey, Breonna Taylor’s family received a $12 million settlement on September 15, 2020, and three officers and a black Attorney General are under fire for protecting the public and defending the facts. [33]