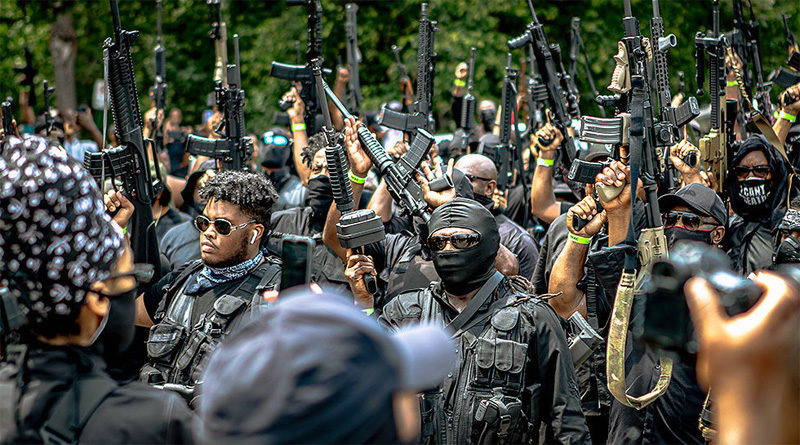 By Chris Sweeney, author who has written for various UK magazines and newspapers, including The Times, The Sun and The Daily Record. Follow him on Twitter @Writes_Sweeney

NFAC, the masked, armed black militia that recently marched through a park in Georgia, deems violence and killing an acceptable response to oppression. Their end goal is to break away from the US as their own black-only nation.
The NFAC (Not F*cking Around Coalition) grabbed plenty of attention on social media with a high-profile public debut on July 4. The sight of an all-black militia, clutching rifles and handguns, marching in the heartland of the Ku Klux Klan at Stone Mountain caused plenty of ripples.

But very little is known about them, despite a frenzy of speculation. It’s not even clear when they were created or how many of them there are.

There’s a misconception that we’re a terrorist group and want to kill white people.

“We are here to protect the black community, as that’s who is under attack. Nobody is protecting black children, men and women in America. What necessitated the creation of NFAC was the need to address a rising tide of police brutality, of racial brutality, of unfairness in the judicial system,” he said.

“Most of us like me are ex-miliitary, we’re not young people on the block, we’re voters, we’re your responsible guys, we’re the guys with the good jobs.”

Every black person a ‘political prisoner’

While seeing themselves as protectors, Jay has a clear aim of what he wants to achieve – and he’s not playing it small.

He feels that black people need to be split from the rest of the US.

So he says he, and others, are filing an order of liberation with the International Court of Justice.

He explained: “I want them to declare every black person who is a descendent of the Portuguese slave trade a political prisoner of the United States. And to sanction the United States to do one of two things. The first is give us our own land here, so we can go in, set up our own government and the whole nine yards.”

Some have speculated that Jay is demanding the states of Texas as this land, but he only used the Lone Star state as an example. The key is to be given land no longer controlled by the White House.

The other option is more radical, which most media have refused to publish.

Jay revealed: “It’s a glaring fact that mainstream media in the United States has completely ignored the NFAC. ABC News tried to do an interview with me but found the information too scary, so they buried the story as a history piece about Stone Mountain.”

The mainstream media will not report on us, as images of organized black folks with guns would send shivers down the spine of the racist core of America.

“My other aim is for an exodus to Africa, to establish our destiny and build our own nation – and get a seat at the UN like everybody else. Forty-five million of us is a nation within a nation, so we can take ourselves to a place where two countries friendly to us are willing to carve out some land.

That would be in Africa, as it’s where we come from, where we have greater numbers, where resources are and I already have relationships with some of the rulers of those countries.

Hypothetically, I want to get an area of about 100 miles on each side, declare it a sovereign zone and build an infrastructure.”

The exodus would only include black people. The NFAC only allow black members, and Jay doesn’t feel this should be a shocking admission.

“Every other entity has their own, we’re the only people on the planet who don’t,” he said. 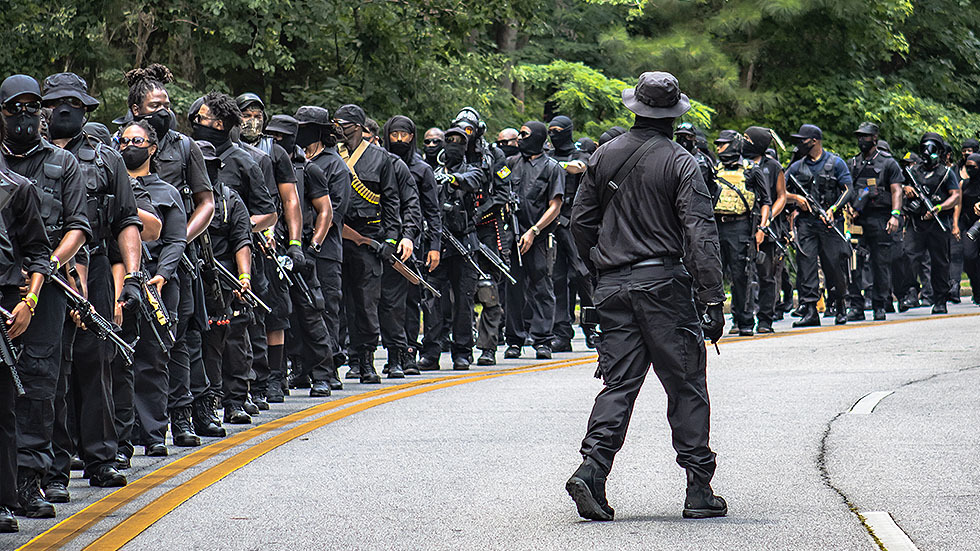