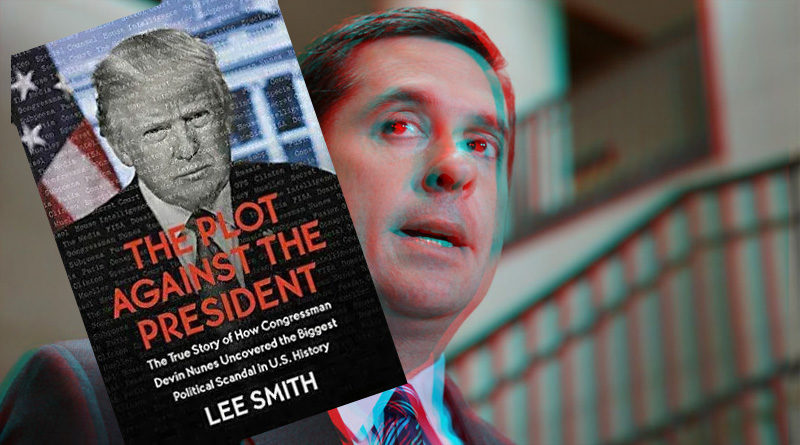 The Plot Against the President by Lee Smith examines the evidence surrounding America’s gravest political scandal, the first attempted coup against a sitting President. Although much conclusive evidence has yet to see the light of day, Smith has done an exceptional job of connecting the dots to explain the scandal.

The author follows the investigation pioneered by Chairman Devin Nunes and Republicans in the House Intelligence Committee from 2016 through 2018. They are the true heroes of this tale, who exposed the conspiracy against Donald Trump’s candidacy and presidency by corrupt Obama “holdovers” in the FBI, Justice Department, CIA, State Department and National Security Agency.

They persevered in this quest despite the endless lies and traitorous activities of Adam Schiff (D-Moscow,) Eric Swalwell (D-Havana,) other ostensible “Democrats” on the House Intelligence Committee, and the latter’s allies and co-conspirators in the Corrupt Leftist Media.

Smith describes the murky and extremely secretive interactions among the Corrupt Leftist Media, shadowy foreign “contractors” employed by the intelligence community, and high-ranking Obama traitors in these federal agencies. However, the precise origins of this treasonous conspiracy may well remain elusive until the Durham investigation is completed.

Smith speculates that this orchestrated smear campaign against Trump did not originate with the “Christopher Steele Dossier,” the fraudulent efforts of Fusion GPS, an opposition research firm that was funded by the Clinton Campaign and the Democrat National Committee with funds laundered through the Perkins-Coey Law Firm in Washington.

Smith makes reference to a number of what he called “proto-dossiers,” which were eventually synthesized into the final “Steele Dossier” by those at Fusion GPS, a team that included Nellie Ohr, the wife of the number four man at the Justice Department, Bruce Ohr.

Steele was a former employee of British intelligence, who hated Donald Trump and was apparently content to concoct any falsehood the Obama Administration conspirators wanted in their efforts to destroy Trump.

Smith believes the contents of the Steele Dossier were not primarily intended to harm Trump’s campaign or assist Hillary’s: Instead, he believes that from its inception, it was intended to initiate an open-ended intelligence investigation of Donald Trump and every aspect of his life. Like many dishonest people who “project” their own failings on others, they assumed Trump was as corrupt as they are and that their investigation would expose dirt of some kind.

The key to their efforts was the fact that the threshold of evidence required for an Intelligence Investigation is far less strict than that required for a Criminal investigation, since the latter must meet the Fourth Amendment’s standards of Probable Cause for arrest and Reasonable Cause for a search. The fruits of these efforts eventually manifested in Bob Mueller’s Special Counsel Investigation, an open-ended inquisition in search of a crime.

Although the Steele Dossier was phony, sophomoric and impossible to verify, its false accusation of a Trump “collusion” with Russian officials was nevertheless considered adequate to initiate Foreign Intelligence Surveillance Act (FISA,) warrants to spy on President Trump and his campaign. It was also used by the National Security Agency to illegally “un-mask” the identity of several hundred Trump associates and campaign advisors.

Of course, the Corrupt Leftist Media were willing accomplices. The “echo-chamber” they helped create was designed to validate or help “confirm” the contents of the Steele Dossier. These efforts consisted exclusively of reiterations of the same lies found in the Steele Dossier, but were reported as if they originated from different sourcing.

Perhaps the most unique feature of The Plot against the President is Smith’s meticulous synthesis of the interactions and coordination between the various conspirators, the timing of tactics by various bureaucrats, and the fabrication of a dominant media narrative to frame President Trump.

Smith brilliantly examines the evidence exposing this scandal, but has also taken time to describe the “back-story,” including who the key players were and when and why they engaged in the particular behaviors they did.