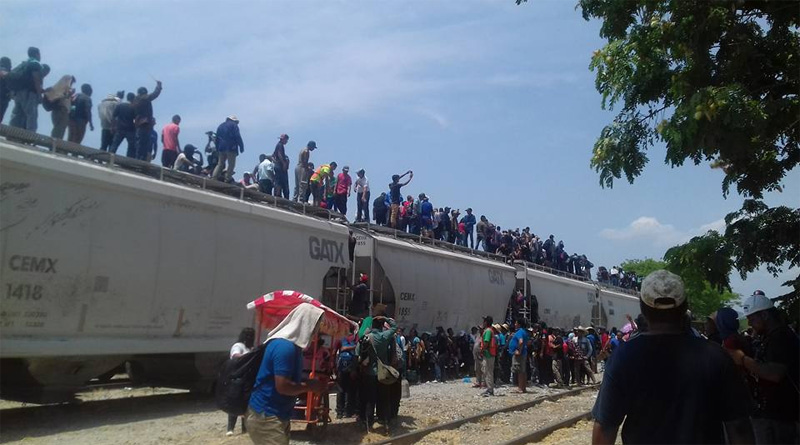 The process by which the Jews’ Media contrive to create a “dominant media narrative” has become patently obvious: Pharisees of the Jews’ Media conspire to produce a sound-bite that is distributed as a memo to the useful idiots in their employ, and then repeatedly broadcast verbatim.

This phenomenon would make compelling evidence of “collusion” if President Trump’s Justice Department were ever to initiate Antitrust Legislation to break-up these Zionist media conglomerates. Their fabricated narratives demonstrate that the Jews’ Media is not only a monolithic entity, but also an enthusiastic purveyor of fake news with a distinctly socialist axe to grind. Take the Latin American “caravan,” for example.

Fearing that we goyim (Yiddish for “cattle,”) might get the wrong idea about the threat that open borders and illegal immigration pose to U.S. sovereignty, the Jews’ Media spent much of October and early November ridiculing President Trump’s warnings about the growing menace of a large and aggressive “caravan” of young Latin males threatening to invade our porous southern border.

On orders from the Pharisees of the Jews’ Media, the useful idiots who staff their news desks and write their copy did everything to downplay or minimize the threat of what eventually became an unruly force consisting of 10,000 men. As the lackeys of the Jews’ Media always do, they parroted identical language to spin their false narratives.

The first lie of the Jews’ Media was its claim that the caravan was thousands of miles away, and thus posed no threat to us. This lie was repeated by that negro communist, Muslim and pathological liar who used to occupy the White House: It probably fooled only the patrons of CNN (the Communist News Network,) MS-NBC (Mediocre Sodomites of the Negro Broadcasting Corporation,) or NPR (National Proletariat Radio.).

Yet, in no time at all, the caravan miraculously traveled more than 1,000 miles and mysteriously appeared in Tijuana. It soon began to menace the residents of Tijuana and quickly turned that city into the kind of shit-hole from which the caravan claimed to be fleeing. The caravan quickly overstayed its welcome in Tijuana, where it overwhelmed the city’s capacity to absorb them, much as earlier waves of illegal aliens have swamped America’s public services for decades.

The second mendacity of the Jews’ Media was that the caravan was a “spontaneous” migration, and did not receive any financial or logistical support from outside agencies. This lie was quickly exposed, when it was demonstrated that convoys of expensive buses were hired to transport thousands of participants from Mexico’s southern regions to its northern border. Individuals were also videotaped handing out cash to caravan participants.

Moreover, recent reportage on Fox News reveals that a communist organization – Pueblos Sine Fronteras – was at least one of the collaborators in funding the caravan and its assault on U.S. Sovereignty. The organizations name translates as “People Without Borders.”

The third prevarication the Jews’ Media disseminated was that the caravan was comprised primarily of women and children. According to the many real journalists embedded in the caravan, it consisted of more than 90% males, and most were between the ages of 20 and 35. At times, women and children were placed in front of the caravan, but only when video cameras were rolling for the video equivalent of a “team photo.”

The fourth form of disinformation by the Jews’ Media was the claim that the caravan consisted primarily of “asylum seekers.” That claim proved to be invalid after experts pointed out that asylum-seekers are required by International Law to seek asylum in the first nation they enter after exiting the nation from which they are fleeing. No one believed that particular lie, anyway.

The fifth falsehood of the Jews’ Media was that the caravan had very few criminals. American and Mexican immigration authorities now claim to have identified more than 600 known criminals in the caravan. (Most of us knew that was the case, anyway.)

Their sixth and last fabrication was that U.S. troops were unnecessary, because the caravan — that supposedly didn’t even exist in the first place — was peaceful and orderly. That narrative was abandoned when several hundred of the its members attempted to forcefully cross the border and began throwing rocks and bottles at U.S. troops and Border Patrol Agents. Fortunately, they were turned back with tear gas and rubber bullets fired by the very troops the Jews’ Media assured us were unnecessary.

Now that they’ve been denied mass entry to the U.S. and many have announced their intentions to begin the long journey home, we will soon discover just how sincere the “humanitarian” motives of Pueblos Sine Fronteras really are. You see, thousands of impoverished caravan members are now stuck in Tijuana, with few resources permitting them to return to their homelands.

Since the caravan has already served its propaganda function, it will be interesting to see if Pueblos Sine Fronteras will subsidize the expense of their return trips. My bet is that the organization will not assist them in their return journey, because they are no longer of any political value to the organization and can be safely discarded.

You see folks, communists only care about power, and despite much lip service to the contrary, don’t give a rip about poor people, whether American or Latin American.