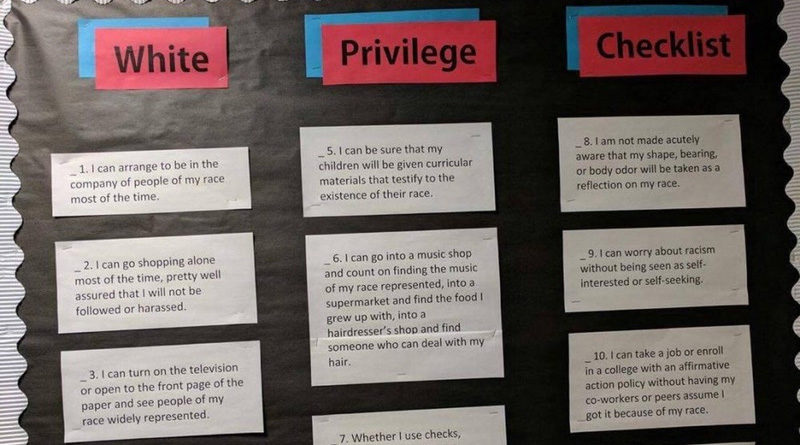 This is a list supposedly illustrating examples of “White Privelege” found posted in Yudof Hall at the University of Minnesota.

Each complaint is followed by the response of a non-communist adult, one who remains unindoctrinated by the lies of race-hustlers and other false prophets of cultural Marxism:

(It is a universal truth that most people prefer the company of their own race, and this principle applies to blacks as well as to whites or Asians or anyone else. But if you must abandon the company of fellow blacks, according to the FBI’s Uniform Crime Reports you are demonstrably safer in the company of whites or Asians.)
(This is fictitious. Blacks are infinitely safer shopping in predominately white areas than in black areas. Blacks primarily need to be wary of other blacks, who prey on them all the time. Many are capable of murdering each other over something as trivial as wearing the wrong-colored garment.

If you are referencing the fact that blacks receive greater scrutiny by merchants than other races, don’t you think it might have something to do with “flash-mobs,” or the fact that infinitely higher rates of shop-lifting occur with items marketed to blacks? )

(If blacks ever manage to do anything noteworthy — except commit violent crimes and then complain about law enforcement — then they may receive the news coverage they apparently desire. Meanwhile, the SPORTS section of the news is saturated with the exploits of blacks.)
(Sorry, but mud huts and “ghettos” are not revolutionary, and just don’t rival the Sistine Chapel, the U.S. Constitution, splitting the atom, the Moon-landing, or discovery of the structure of the DNA molecule…)
(Black History Month begins in early January, and doesn’t end until late December because blacks now control most large-city public school systems. If you need proof of the “existence” of your race, study the FBI’s Uniform Crime Reports, which testify to its existence most eloquently.)
(Your so-called “music” is on display every minute in every large, urban area –- mostly to disinterested parties — at an exposure level of 150 decibels. And, if businesses catering to blacks aren’t conveniently located, it’s because they have fled the vandalism, armed robberies, shootouts, and employee theft that characterize commerce in the many areas that blacks have managed to convert to “ghettos.”)
(This is a problem for blacks only because most merchants have extensive experience with black dead-beats, who write bad checks or use stolen credit cards. I used to keep a half-dozen of my own bad checks, all from blacks and all having holes punched in them by the Federal Reserve System.)
(This would not be a problem if more blacks practiced hygiene instead of LOW-giene. As my mother used to say, “Soap is cheap.”)
(Blacks routinely obsess on the subject of race, and parrot the false and tiresome complaints of their race-hustling “leaders.” Their complaints have been so endless and unfounded, most whites no longer pay any attention. On the other hand, whites who dare tell the truth are shouted down for doing so by race-hustlers, communists, and the purveyors of “fake news.”)
(The vast majority of blacks who are accepted into a college or university ARE ADMITTED ENTIRELY BECAUSE OF THEIR RACE.)
(This is just nonsense! If your lateness “reflects on your race” it is because your race is habitually LATE! Try getting your black ass out of bed at an earlier hour, and being punctual for a change.)