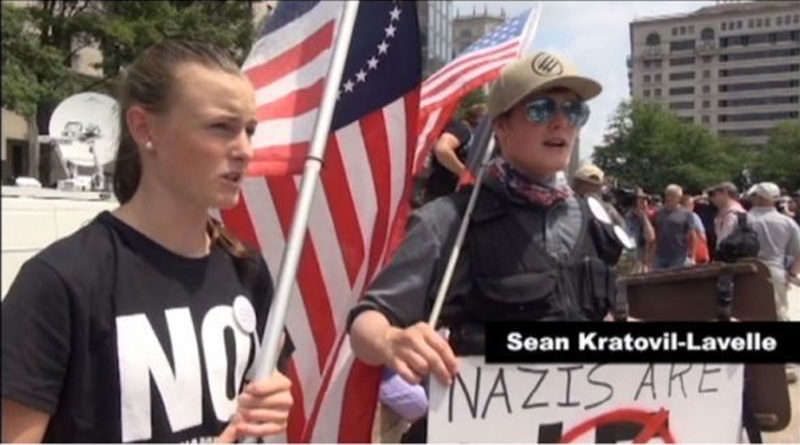 A leading organizer in a self-described “Antifa” cell, Iron Front USA, is a member of a prominent Maryland political family. The organization takes inspiration from the German Iron Front, a paramilitary group that embraced violence against conservatives, National Socialists, and even left-wing rivals.

Sean Thomas Kratovil-Lavelle, pictured above at an “Antifa” rally next to his sister Charlotte, posts on the Iron Front’s reddit under his own name, bragging about engaging in the groups masked antics. Kratovil-Levelle is wearing the three arrows symbol appropriated by anarchist paramilitary organizations, while his sister is wearing a “Refuse Fascism” t-shirt, a group run by the Revolutionary Communist Party.

According to witnesses, the mother of the two, an immigration attorney and open borders activist, was present with them at the rally. Kratovil-Levelle and his group, which uses the Captain America logo altered with the Iron Front logo, largely operates in and around Maryland, but National Justice has received tips and images from concerned citizens about them menacing people attending Trump rallies in Boston as well.

His uncle, Frank Kratovil Jr, served in the House of Representatives for Maryland’s 1st Congressional District from 2009 to 2011 as a Democrat. Despite being an incumbent and raising over a million dollars for his race, Kratovil lost to Republican Andy Harris in 2010. A year after leaving office, Governor Martin O’Malley appointed Kratovil to be a judge in the same district his father served in, demonstrating a stark but familiar lack of meritocracy in the America’s incestual plutocratic system.

Kratovil-Levelle’s hometown of Stevensville, Maryland is 90% white. 98% of the community is composed of US citizens, meaning they do not live with or compete for jobs with the immigrants they advocate for. With a median property value of $356,400, it seems like all of his activities terrorizing working class people he and his cohorts target for “doxing” and street confrontations is driven by sadism and the desire to impress other rich, politically connected people.

Nationalists and left-liberals don’t understand each other due to a class difference: for Kratovil-Levelles segregated in their little islands, issues like immigration and multiculturalism are pure abstractions. America is still white and wealthy for them.

According to French researcher Jacques Leclercq, most “anti-fascists” are recent university graduates, often from elite backgrounds, who live as “BoBos” (bourgeois bohemians). They engage in direct action in defense of the privileges they have inherited under neo-liberalism — powers and opportunities denied to the vast majority of disenfranchised white people they decry as “racist” and worthy of violent beatings.

If you’re wondering why nationalists are always being railroaded in court while anarchists and communists who utilize political violence to silence others never do, it’s because the “antifa’s” whole family are working as prosecutors, judges and DC politicians.