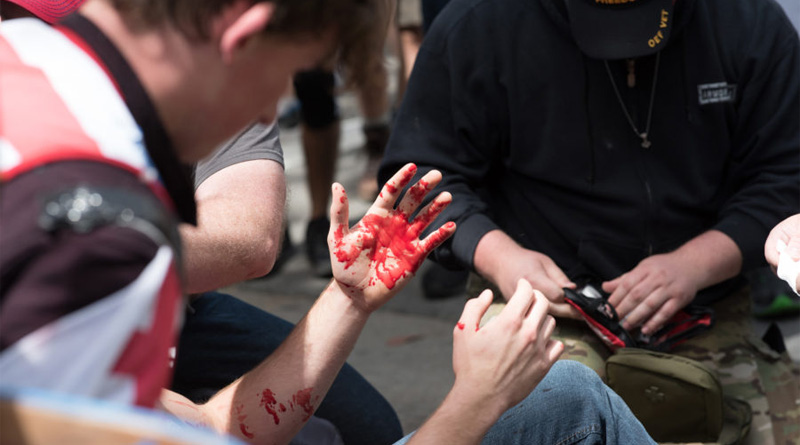 A former East Bay college philosophy professor who was charged with four counts of felony assault with a deadly weapon, causing great bodily injury, has taken a deal resulting in three years of probation for an attack at a Berkeley protest last year, court records reveal.

Eric Clanton had been linked by police to violent assaults with a metal bike lock during a “free speech” rally in Berkeley on April 15, 2017. Before his arrest, Clanton had been “outed” online, on the website 4chan, as someone who used a bike lock to strike a man in the head. The assault was captured in a video clip (below) that drew widespread attention and anger after it was posted on YouTube.

Wednesday, Clanton was supposed to have had his preliminary hearing, where a judge decides whether there’s enough evidence in a case for it to move ahead to trial. Instead, there was no hearing, and information about Clanton’s plea deal became available online.

According to Alameda County Superior Court records, Clanton entered a “no contest” plea Wednesday to one misdemeanor battery charge. The felony charges against him were dismissed, and an allegation that he had caused serious bodily injury was stricken. A misdemeanor charge that Clanton wore a mask during the commission of the crime also was dropped.

Police said, previously, that Clanton attacked at least three people with a metal U-lock during the April 15 rally in and around Civic Center Park. Court papers later revealed that Clanton struck at least seven people in the head, according to authorities. One person received a head laceration that required five staples to fix. Another was uninjured but had a piece of a helmet broken off. A third was struck across the neck and back, police wrote.

Police wrote that they had found evidence last year during a search of Clanton’s home in San Leandro linking him to “Anti-Fascists and Anarchy political groups,” according to court papers. He was not home when police arrived, so officers moved to a second address in West Oakland where they said they found flags, patches and pamphlets “associating Clanton” with antifa and anarchist groups. Investigators arrested Clanton there.

Detectives said they “recovered U-locks, sunglasses, a glove, jeans, and facial coverings” consistent with items worn during the April 15 assaults, according to court documents. And a camera found at the San Leandro home contained “selfies” taken by Clanton, police said, “with him wearing black clothing and facial coverings” consistent with April 15.

Police said in court documents that Clanton’s phone records placed him near Civic Center Park during the time of the protest assaults, too.

Police wrote that other photos they found showed Clanton “posing next to Anarchy symbols.” An “Iron Front” tattoo on his bicep, photographed while he was being logged into jail, “is associated with Anti-Fascists,” too, according to court papers.

Sometime before his arrest, police said Clanton tried to discuss the April 15 assaults with staff at Diablo Valley College — where he taught in 2015 and 2016 — and “never stated he wanted to proclaim his innocence.” He retained attorney Dan Siegel prior to his arrest and designated Siegel as his representative, police wrote.

When he was taken into custody last year, Clanton “immediately invoked his rights to an attorney” and declined to be interviewed by police, according to court papers.

It wasn’t the first time Clanton had been arrested in connection with East Bay demonstrations, police said last year. On Jan. 9, 2014, the California Highway Patrol in Oakland arrested him at Highway 24 and Interstate 980 during a Black Lives Matter protest on suspicion of committing a “public nuisance,” and “willfully and maliciously” blocking a street, sidewalk or other public place. Both are misdemeanors. Police reported no charges in that case, however, or any prior convictions.

Berkeleyside has attempted to reach Clanton’s attorney and the Alameda County district attorney’s office for comment. This story will be updated if that information becomes available.