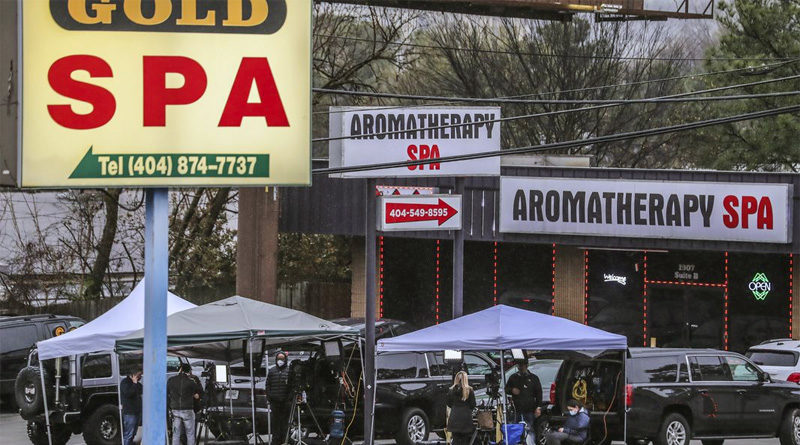 By Brian Trusdell | Friday, 19 March 2021 NewsMax — The brother of a white man who was among eight people killed at three Atlanta-area massage parlors earlier this week told Newsmax TV on Friday that he was ”angry” at ”morons in the media” who repeatedly have suggested that the murders were racially motivated because six of the victims were of Asian descent.

”The media needs to tell the truth,” said John Michels, brother of Paul Andre Michels, a 54-year-old security systems company owner who was servicing a client at the time of the shootings. ”And it really angers me that I have a dead brother, in a crime, and they’re talking about race. If it were me … I am very angry at these morons in the media.”

Police reported that the suspect in the case, Robert Aaron Long, told them there was no racial motivation in Tuesday’s shootings, but that he blamed the massage parlors ”for providing an outlet for his addiction to sex.”

However, countless news outlets have emphasized race as a potential motive for the attack despite the police statements.

”The gentlemen who did it was addicted to pornography, which is a widespread epidemic in this country, and actually since the lockdown has actually gone off the charts,” Michels said on ”Greg Kelly Reports.” ”This is not a hate crime. This is a disturbed young man with psychological issues who needs some help. I’ve been praying for him.

”Being Catholic, I have to forgive him, but I’ve been praying for him. And the truth needs to come out. This was not a hate crime.”

During the conversation on Friday Kelly asked Michels, who is white, if he was invited to meet with Joe Biden and Kamala Harris in Atlanta today.

Michels responded, “No, I live in Michigan, but I was not contacted by Bozo Biden or Commie Harris at all… And they really need to focus on the right issue and not the race issue.”

John Michels invoked the late radio talk show host Rush Limbaugh in describing what he characterized as the news media’s focus on race in the shootings.

”This is a drive-by media creating a narrative that is not correct,” he said. ”I wish they would stop, think about what they’re doing and quit stoking racial division in this country. We don’t need it.”

Besides Michels’ brother and the six Asian-background women, a white woman was also killed and a Hispanic man was wounded.

”[As] someone who has had issues with pornography in the past, who actually overcame them through, drew closer to my faith and with confession and the rosary and … Christ, freed myself from that, I understand where this man is coming from,” John Michels said.