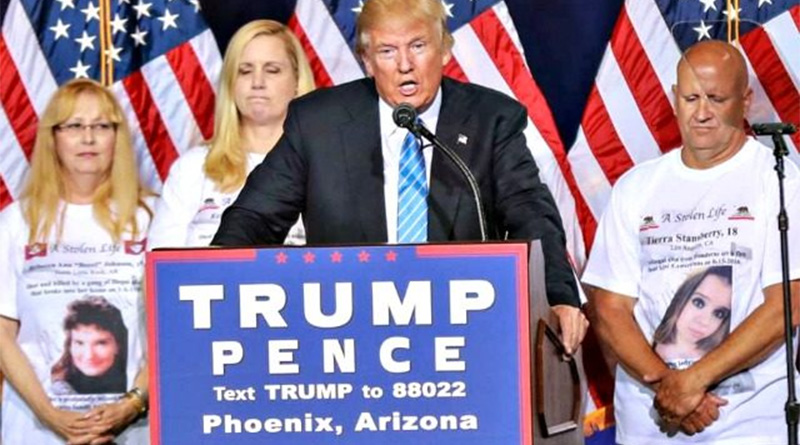 The families of Americans who have been either hurt or killed by illegal aliens say, “before we worry” about giving amnesty to border-crossers and visa-overstayers, lawmakers should “respect” the victims – “by no fault of their own.” – of illegal alien crime.
In a statement this week, the members of Advocates for Victims of Illegal Alien Crime (AVIAC) — known as “Angel families” — said Americans should take priority over the nearly 800,000 illegal aliens shielded from deportation under the President Obama-created Deferred Action for Childhood Action (DACA) program who are lobbying to be given a pathway to U.S. citizenship.

“To legally emigrate to the United States, you must ‘get in line,’” the statement said. “DACA recipients, ‘who came here through no fault of their own’ need to ‘get in line’ and they should be at the back of the line.”

Like pro-American immigration reformers, and President Trump’s administration, the Angel families say they want to see major changes to the illegal and legal immigration system, including the construction of a border wall, deportations of all illegal aliens in the U.S., and an end to birthright citizenship, which gives illegal aliens the ability to permanently stay in the country so long as they have children here.

There were over 211,000 illegal aliens in state jails and prisons and another 41,500 in federal prisons in 2016. We need to make sure the law blocks any state or municipality or any future president from releasing these people back into society. We need to make sure all of those who served time in the past but have already been released into society have been deported before we take any action on “those brought here through no fault of their own.”

Aside from border security we need to change our birthright citizenship policy. We need to make sure that those here now illegally cannot keep having children who automatically become citizens. These children are citizens of their parent’s home countries. Until that policy is reversed, by law, we should we take no action on “those brought here through no fault of their own.”

Likewise, the Angel families say they want to see the process whereby new immigrants to the U.S. can bring an unlimited number of foreign relatives with them, known as “chain migration,” completely ended, –as Trump has proposed, as well as the implementation of mandatory E-Verify, the electronic system that prevents businesses and corporations from being able to hire illegal aliens over Americans.

Most importantly, the Angel families say, is remembering the Americans who have lost their lives to immigration and blocking any amnesty until the Department of Homeland Security (DHS) can ensure that future Americans are not at risk of being victimized by illegal aliens and newly-arrived immigrants.

Discussions on Capitol Hill surrounding Trump’s pro-American immigration reforms — which include ending chain migration, reducing legal immigration, constructing a border wall, and mandatory E-Verify — have all included a pathway to U.S. citizenship for DACA illegal aliens, despite the plan being a betrayal to Trump’s core base of supporters and victims of illegal immigration.

For example, a Senate immigration package released this month would end chain migration, thus cutting legal immigration levels in half, from more than one million immigrants a year to 500,000 a year, but pairs it with an amnesty for DACA illegal aliens.

Also, a group of business-first Republican establishment senators announced that they plan to meet with Democrats in order to broker a deal for DACA illegal aliens.

Chain migration makes up more than 70 percent of all legal immigration — with every two new immigrants bringing seven foreign relatives with them.