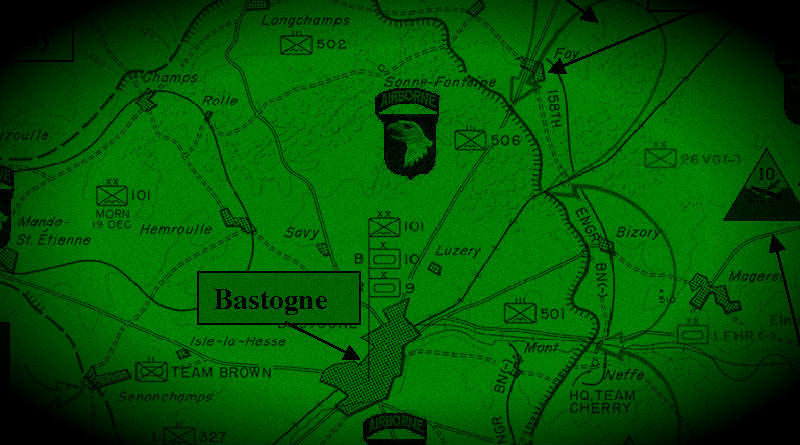 By mid-December of 1944, the Allied Expeditionary Force (AEF) that landed at Normandy was concentrated in Eastern Belgium, poised to cross the Rhine and invade Nazi Germany to the East. In response, Hitler’s Generals devised a brilliant counter-offensive that punched through the AEF’s thinly-defended northern forces near the Ardennes Forest, in what historians have termed “The Battle of the Bulge.”

In response to this German counter-offensive of 24 Divisions, Eisenhower hastily ordered the 101st Airborne Division — and fragments of other artillery units — to be trucked to the quaint but critical Belgian town of Bastogne to defend it. Both sides recognized Bastogne was the “key” to the Battle of the Bulge, because it was the intersection of eight roads in a rural area where few roads existed.

The ultimate goal of Hitler’s Generals was to reach the port city of Antwerp, Belgium — far to the West — through which flowed the endless fuel, ammo, food and reserve forces that supplied the AEF. If the Germans could take Bastogne, they had a clear and unimpeded path to Antwerp, from which they could disrupt Allied supply lines and leave the AEF stranded in Belgium. 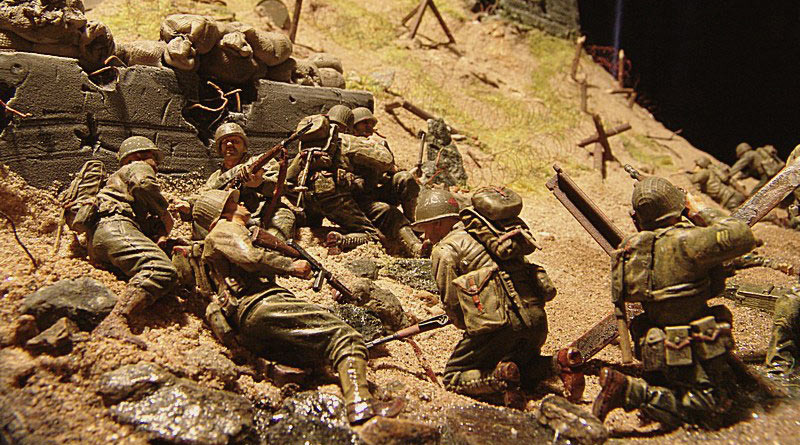 For a week, the 101st Airborne and other assigned units fought heroically and held off every advance the Germans made. The 101st was one of America’s most highly decorated combat units in W.W. II, and it showed why by ferociously repulsing repeated German attempts to attack and seize Bastogne. They fought as tenaciously as the Defenders of the Alamo.

Finally, on December 22nd, a small contingent of German soldiers approached Bastogne under a white flag of truce, and submitted a “Surrender or Die” ultimatum from the German Commander, General Heinrich von Luttwitz, which read as follows (abbreviated):

“To the U.S.A. Commander of the encircled town of Bastogne:

…There is only one possibility to save the encircled U.S.A. troops from total annihilation: that is the honorable surrender of the encircled town…

Anyone who has ever viewed the movie Patton or has read anything about World War II or the Battle of the Bulge knows the American response: It came from the acting Commanding Officer of the 101st Airborne Division, Brigadier General Anthony McAuliffe: When first told of the German ultimatum, he replied “nuts.” His staff eventually concluded that was as good a response as any.

The German Major who received McAuliffe’s reply asked the American Officer who handed it to him what was meant by this idiomatic expression, “nuts”? In reply, the American Colonel stated “In plain English? Go to hell, Major!”

Eventually, Bastogne was relieved by three Divisions from General Patton’s Third Army, in one of the greatest examples of military leadership ever devised. Patton was able to withdraw Third Army from winter combat “on the line,” rotate it 90 degrees and move it 100 miles north in just over 48 hours to rescue Bastogne, and he was able to do so despite narrow, icy roads and Europe’s worst winter in 30 years.

Martin Blumenson, a military historian attached to Third Army in Europe claims it was the “sublime moment” of Patton’s career, and the moment for which he had trained his entire life. Indeed, echoing Patton’s belief in predestination, another biographer has argued that “…it was as if destiny had groomed him for this single defining instant…” (Carlo D’Este. Patton: A Genius for War. HarperCollins, NY.)

At a time when most Republicans in Congress reflexively throw up their hands in surrender before the first shot is fired — or collaborate with our mortal enemies — it may be difficult for many Americans to recall what it is like to be led by men of honor and courage.

While we’re sitting down to Christmas Dinner on December 25th — warm and cozy in our heated homes — perhaps it would be useful to take a couple of minutes to recall 73 years ago, when 20 year-old kids were struggling to keep from freezing to death while they were fighting for their lives against ferocious German Tank and Artillery Divisions at Bastogne, Belgium.

The fight in which we find ourselves currently engaged is fought just as much to honor and preserve their sacrifices, as it is to defend our civilization for the benefit of future generations.