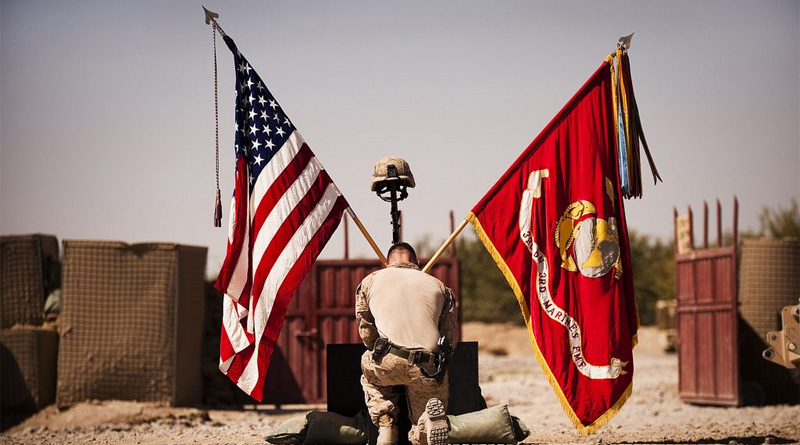 I recently interviewed a US Marine about Islam and jihad and multiculturalism in the military.

Marine – The theory of multiculturalism is flawed in two major regards: it operates under the blatantly false principle that different cultures share the same values, and that there would be no conflict of interest between these cultures. The natural progression of ideas in an ecosystem is much like the manner in which two predators compete within a limited space for resources, with the predators equating to, on the one hand, the cultural foundation in subjugation and enslavement that Islam is rooted in, versus the courteous nature of Britain’s cultural foundation. One beast will devour the other, unless it adapts. Progressivism is a cancer, a degenerative disorder that’s getting worse with each generation, because there is no foundational counterbalance to it.

In addition, importing a mass of foreigners can create an imbalance in their pursuit of in-group goals at the expense of the residents. Personally, I believe letting their culture amass in population size by virtue of our government’s giving a desolate landscape billions in foreign aid and food creates the future invasion force that thirsts for our resources. You’ve got to think of what the Nazis were able to rationalize under the pretext of fighting international corporate elements and redressing massive economic disparity. A desperate animal will kill anything with any method at its disposal. And the most troublesome aspect of this is that there is no mercy nor respect coming from the barbaric cultures coming in. From a pure operant conditioning standpoint, the West allows these foreigners to get away with horrific crimes without any consequences, leading to the reinforcement of their anti-Western views and the way that Islamic fundamentalists look down upon the West. They see easy prey, and we are nothing more to them than that. Frankly, it’s not about the ethics of imperialism, it’s a kill-or-be-killed scenario, in which we give them more and more means by which to swarm in and colonize our nations.

This is a war of cultural conflict. A clash of ideas. On one side, we have a nation that isn’t allowed to have an identity, is experiencing the deconstruction of biology in regards to this gender/sex nonsense (which isn’t even backed by science, which I can definitely explain without much complexity), and expressed schisms between the sexes. On the other, we have a fundamentalist system distinctly geared to survive in harsh conditions and war/conquest. Each member of their family has definitive roles and to attempt to deconstruct that is to welcome death.

This may seem arbitrary or tangential; however, we’re witnessing parallels of the numerous utopian rat experiments playing out — and this new demographic will replace the currently crippled population if steps are not taken. The Utopian Rat experiment eventually leads to a behavioral sink, at the initial perception of overpopulation… Kinda like how the media told us to get abortions and stop having kids to save the environment or because there were too many people around. Funny how that destructive indoctrination seems to have engineered the severe decline in birth rates.

Joshua – The left in particular are heavily against the funding of the military and (in the UK) are against its very existence. Soldiers get spat at on the streets over here. Why does a soldier sign up for service? Regardless of whether it’s Trump or Clinton in power, a soldier, to me, doesn’t seem to pick up his arms for political reasons (or because he or she supports a political party). Clearly there is a need for every country to have a defense mechanism in place. Soldiers perform their tasks regardless of the political party in power. How do you feel about soldiers being blamed for having served or serving?

Marine – From my extremely anecdotal experience, there are two kinds of soldier. An opportunist, and a cultural military enthusiast. For some, it’s about the benefits. It’s about escaping an economic plight or socioeconomic disparity/trap. These people tend to be the ones who will bring political nonsense into the military, because for them the military should be convenient and appeal to their in-group “needs.” This is why EO (equal opportunity, sexual harassment/assault, etc. are all compiled under the EO order now) issues are seething throughout the military. The military is expected to care more about the culture than mission accomplishment from the outside. And the culture is severely toxic due to these kinds of people. For others, the military is an idea and a home. It’s a brotherhood and borderline spiritual endeavor that shouldn’t be sacrificed for anything. Strength, competence, reliability and more, all encapsulate the epitome of the healthy masculine image for these people. Part of our DNA demands us to be competent in violence, and so this side of the military motivation/drive is what brings people to join for the reasons like “getting to kill,” which is more about expressing repressed innate biological function in a healthy/productive environment that needs it instead of the outside world. I actually think that the intensity of the anti-military rhetoric and attitudes in London is what drives men and women to seek out ISIS. It’s their therapy from an environment that denies them expression and a place to belong. Don’t get me wrong, I’m not saying that everybody needs to hug it out, I’m just expressing that while multiculturalism is definitely bad, micro-cultures are an innate sociological cog that allow for the diverse biological demands of a society to be actualized and fulfilled.

Joshua – I’ve always said that the rules of engagement have changed in combat. It’s no longer two sides dressed in uniform meeting on the battleground. The enemy is all around. From car jihads to bombings to multiple stabbings. Any thoughts on this topic? The military can’t protect us from these people that we have let into our countries who despise us and are able to set up networks of cells, etc. Technology has assisted in changing the rules of engagement.

Marine – Yes, social media has changed the nature of terrorism to something much more frightening than ever before. I completely agree.