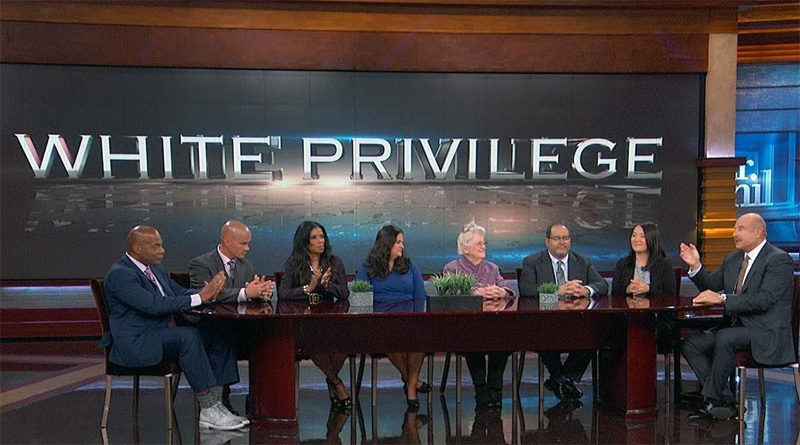 Black Lives Matter wants to burn down every store, every community and every police department in America. Its partner in anarchy, Antifa, wants to destroy the foundation of law and order in America. These two groups represent 21st century hoodlums, vandals and killers.

If they succeed, our country would resemble Sudan, Congo and Somalia’s current state of war and chaos, which has been their hallmark for generations. Notice those countries’ are run by “Black Privilege.” Notice they’re illiterate, starving, overpopulated, suffer constant conflict and endless hopelessness.

The irony of this prejudice against White people in America stems from the fact that at 100, 300, 400 million and more, people of color would move to America tomorrow if given a plane ticket. As Buddy Brown said, “My White privilege came from hard work.”

Well, for anyone reading this column, I grew up using an outhouse until I was seven years old. I started working by age 11. I picked cucumbers at 2 cents a bushel. I cut hay on a 1949 B John Deere tractor from dawn to dusk. I busted my ass baling hay, running corn silage, and busting 60-pound bales of hay into the barn. I’ve shoveled more cow manure, chicken crap and pig shit than any inner-city kid ever dreamed about. I worked my way through high school and college. I served in the Army. I became a teacher. I quit teaching because of the horrible wages and became a long-haul truck driver for United Van Lines. Few jobs equal the brutal hard work of moving furniture 70 to 90 hours a week. After all that work, I’ve written and published 15 books, which was always my goal since my youth. If you think writing a book is easy—try it! I labor daily on my “keyboard salt mine.” My 15th book published this month: Zen Between Two Bicycle Wheels: Eat, Pedal, Sleep. On Amazon. As Buddy Brown stated, you get to reach your dreams through HARD WORK! That’s my “White Privilege” history!

Yes, this country stands at 90 percent White people and 10 percent Black people. It’s a fact that Black Americans enjoy the HIGHEST standard of living in the world. Blacks in America, as told by Buddy Brown, enjoy every ‘edge’ for successful lives. There are more Black millionaires in America than the rest of the world. More Black sports heroes enjoy more acclaim than anywhere else in the world. More Blacks enjoy college educations and endless opportunities than the rest of the world combined. To be Black in White America remains one of the best gifts imaginable when you look at what’s going in Africa where millions starve to death and die of AIDES. Anyone ever heard of “Black Privilege”? I can name you 30 off the top of my head: BET, WIC, ADC, Miss Black America, Blackish on TV, affirmative action, African-American studies, Maxine Waters, quotas, all Black colleges, Oprah, NBA, NFL, EBT cards for unlimited food, Section 8 Housing, free breakfasts and lunches for inner city kids, medical care, SS, anchor babies, ESL and the list goes on and on.

As to the ones in the inner cities, it’s a choice that 60-70 percent of them quit school and join gangs, or remain burger flippers for their lives. Their financial mobility usually ends up in prison. It’s a choice that 7 out of 10 Black teens get pregnant to end up as single mothers on their “forever trajectory” on welfare paid for by the rest of us who work for a living, obey the law and live civil lives. All 1 million Blacks in prison chose to break the law. They knew their choices and they took them.

At the same time, I celebrate all Black Americans who remain in school, earn a diploma, obtain a job and work toward their dreams. I’ve worked with African-Americans all my life in college, in the military, in the hospital, in school and in moving furniture in 48 states. I’ve respected every single person of every color my entire life.

Does that make me guilty of bias, prejudice, systemic racism, White guilt or White privilege?

What’s my point? I’ll bet that 99 percent of the White people reading this commentary can say the same thing as to their honorable treatment of Black people and all other Americans of color. Additionally, we must stop the violence and stupidities of Black Lives Matter and Antifa. I want those terrorists arrested, prosecuted and jailed.

Yes, we need to fix a few things, and we will, but the fact remains, we are the first country in the world to abolish slavery. Please note that slavery has encompassed blacks, whites, browns, yellows and every major civilization since the dawn of time. It still goes on today in Africa and the middle east. We enjoy a Constitution that allows us to move forward peacefully rather the violence now being perpetrated across our country in the past two months.

What can you do? Can you call your two U.S. Senators and House member and demand they work toward law and order? Demand that the FBI track down those anarchists and arrest them. Can you demand that your governor and mayor of your city and state get off their butts and administer the “rule of law” in order to protect businesses and police departments? Can you support your police because 99 percent of them are decent, good and responsible men and women? Can you get on Social Media and demand your local and statewide leaders stand their ground against BLM and Antifa?

Because if you don’t, our country faces some nasty outcomes in the current climate of violence and anarchy.