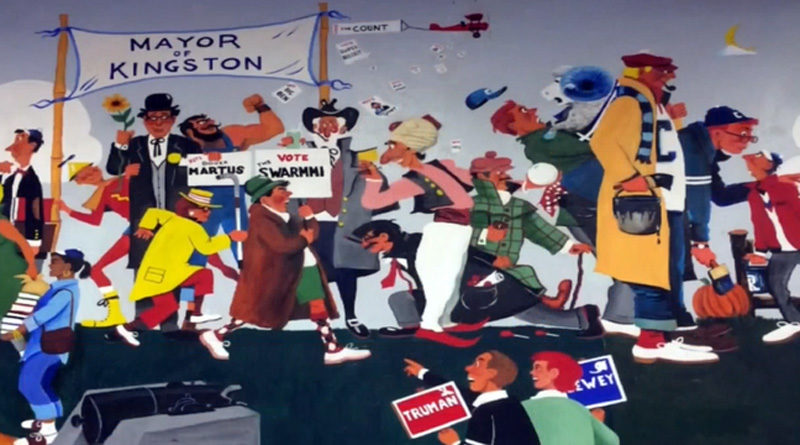 A mural painted nearly 70 years ago at the University of Rhode Island is set to be taken down.

This, after staff said students complained about a lack of diversity in the picture.

The Memorial Union was dedicated in 1954 at the University of Rhode Island.

When veterans returned from World War II and enrolled at URI, they and other URI community members raised money in memory of those who lost their lives in the war.

Money raised was for a modern student union, which gave it the name, Memorial Union.

Arthur “Art” Sherman was a decorated returning veteran and member of the class of 1950, a predominately all-white class. Fewer than 2,000 students attended the university overall.

Originally, he was asked to draw cartoon-like murals in a Quonset hut that served as an earlier site for the student union. But in 1953, as the current Memorial Union was being completed, the building’s manager asked him to paint more murals in the new building’s ground.

“Oh, I loved painting that, yeah,” said Sherman, who’s now 95 years old. “I never had any formal education in painting by the way I just used to cartoon.”

Kathy Collins, vice president of student affairs, told CBS 12 she received complaints because the two folk-art murals portraying life in the GI Bill era of the 1950s “portray a very homogeneous population” and that most of the people depicted in the murals are “predominantly white.”

Collins also told the CBS news affiliate that some students told the school they “didn’t feel comfortable sitting in that space.”

She cited the deaths and shootings of criminal Negroes such as George Floyd and Jacob Blake as part of her decision:

“I think we have to recognize the horrible incidents and the tragic murders of George Floyd, Breonna Taylor, and most recently Jacob Blake in Kenosha Wisconsin during this is heightened time and we as an institution have to look at the systems in place across this institution that maybe are not representing who we are today and representing the true diversity of URI today.”

The public university announced the plans to cover up and replace the murals in the school’s Memorial Union in a September 3 news release. The murals are currently covered up and the school said it wants the paintings replaced before classes start. The student union is currently undergoing renovations.