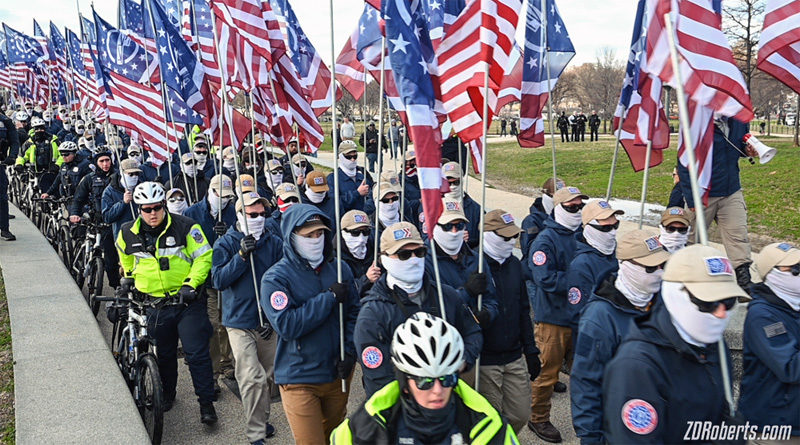 Police escorted about 150 masked white nationalists from the group “Patriot Front” throughout Washington DC Saturday afternoon, while antifa confronted them.

“Patriot Front” is a rebranding of “Vanguard America” – an avowed fascist group – who participated in the “Unite the Right” rally in Charlottesville. The group uses patriotic imagery and terms to sell an explicitly anti-Semitic and white nationalist ideology.

The group was led by its founder – Thomas Ryan Rousseau (born 1998) – who was the only participant not wearing a mask.

James Alex Fields – now serving a sentence of life in prison for the murder of Heather Heyer – was associated with “Vanguard America.”

The group began Saturday afternoon at Arlington Memorial Cemetery and marched into Washington DC, starting with the Lincoln Memorial where they were confronted by antifascist activists.

They then marched to the Capitol under police escort, and were given exclusive access to the Capitol lawn, which was cleared of all non-Patriot Front attendees and police officers.

“Patriot Front” activists concluded by entering a Walmart parking lot from where they recovered about half a dozen trucks and drove away.

As the confrontation came toward a conclusion, an unusual conversation occurred.

“Why are you wasting so much money? You spend so much money on this s***” yelled an Antifa activist (who prefers to be called “J” in news) at the police. Lieutenant Jason Bagshaw of MPD came over and talked for a few minutes to the activist.

Lieutenant Bagshaw said that all measures taken throughout the day were for public safety, but “J” disagreed.