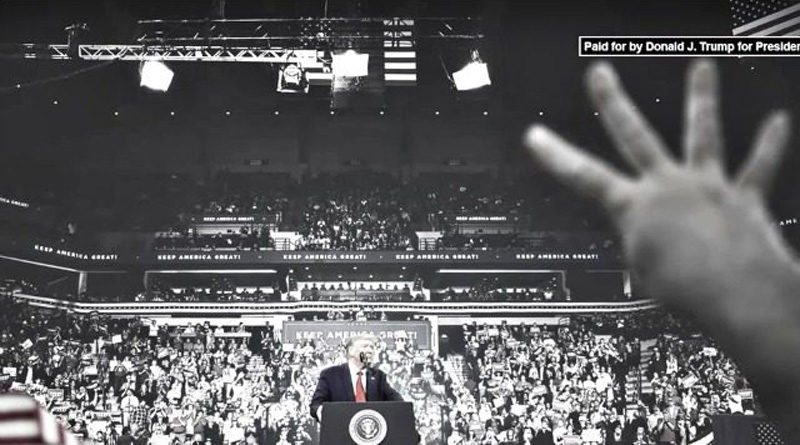 President Donald Trump’s re-election campaign will take over YouTube’s homepage on Tuesday for 24 hours with a 7-figure ad buy, a huge investment one week from Election Day, Breitbart News has learned.

The move, enabled by Trump campaign investments early on in the 2020 cycle, will feature a number of key ads the president’s campaign hopes to sink in to the broader public in the final days before Americans head to the polls a week from Tuesday.

The ads that will run as part of the buy include a variety of different messages, and these not-yet-public YouTube links to the Trump campaign ads will go public at midnight on the east coast. The first one features a narrator speaking about key themes of Trump’s rise to the White House, and moments from his presidency, on the backdrop of patriotic pictures of the president:

The second one goes through several statistics from the Trump presidency, including how Trump has added seven million jobs as president–500,000 of them manufacturing jobs–overseen wage growth, cut taxes for Americans, and set other economic records:

The third one is a direct-to-camera video of President Trump discussing the threat of the corruption of the Biden family:

Joe Biden, and the family, there is such corruption,” Trump says in the yet-to-be-released ad. “It’s so obvious. He would go to a place, whether it’s China or Ukraine or any place–Russia–you take a look at what he’s done and his son was like a human vacuum cleaner. They’d take out millions and millions and millions of dollars.

The next one is a video of boxer Duke Tanner, who was sentenced to life in prison due to the Biden-backed 1994 crime bill for a nonviolent first-time offense, praising Trump for granting him clemency and a second chance. It also features Alice Johnson, whom Trump pardoned as well:

Trump campaign officials told Breitbart News that the biggest ad a campaign can buy online is a 24-hour takeover of the masthead of YouTube’s homepage, and such an ad buy has more reach than CNN and MSNBC combined. This buy on Tuesday is one of 20 such days this election cycle the Trump campaign is taking over YouTube’s masthead, and another one upcoming will be on Election Day itself.