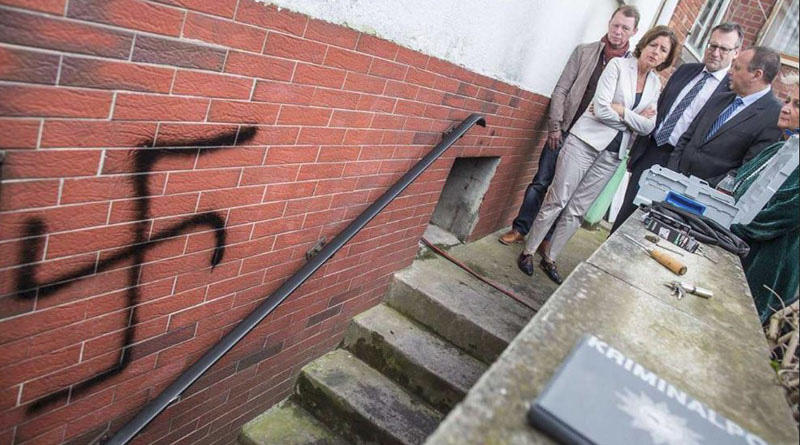 A hate crime aimed at black students at Maryland’s Salisbury University has been revealed as just the latest high-profile race-related hoax to hit the groves of academe in the race-obsessed Obama era.

Except for acknowledging that the two perpetrators are African-American students at the school that is located on the Delmarva Peninsula in eastern Maryland, the university is engaged in a cover-up. If the perpetrators were white, a cynic might say that the school would find a way to leak out the pertinent details in order to make a political statement.

Of course, there certainly are racist incidents on university campuses, but blacks are rarely the targets or the victims. Blacks are more likely to be the instigators or beneficiaries of racist acts. Racially discriminatory admissions policies are a kind of reverse apartheid and part of what David Horowitz has termed “black privilege.” Such policies help unqualified African-Americans get into some institutions of higher learning, while keeping academically qualified Caucasians and Asians out.

As Americans have seen in the Obama era, the cultish, Democrat-endorsed Black Lives Matter movement, whose members openly urge the murder of cops, is built on the Big Lie that police routinely use black Americans for target practice. This evil movement draws many of its activists from college and university campuses.

This makes sense. The academy is a logical enough home for modern-day racists, especially those with dark skin, a condition that makes them more or less immune to serious scrutiny. In the professorate there is no shortage of supporters of racist cop-killing black radicals like Mumia abu Jamal and Assata Shakur.

In such a political and intellectual climate it shouldn’t be all that surprising that racial hoaxes thrive on the nation’s college and university campuses. Without lies, the Left would have no recruiting tools. Lies sell books and movie tickets and get people to volunteer their time for what they think is a worthy cause. (British journalist Milo Yiannopoulos compiled a helpful list of more than 100 hate crime hoaxes from the past decade in a recent Breitbart News article.)

Lies about racist white people running wild serve as especially effective get-out-the-vote programs for left-wing Democrats. The killings of Trayvon Martin of Sanford, Fla., and Michael Brown of Ferguson, Mo., were not sparked by race. Martin and Brown, despite the relentless left-wing propaganda muddying the waters, both initiated physical violence against white authority figures — a neighborhood watch volunteer and a police officer respectively — who ended up killing them in self-defense.

America is a terrible racist country rife with injustice and misery, the Left wants to tell people. If left-wingers can’t get their hands on useful facts, they fabricate their own facts.

It is unclear whether the act complained of at Salisbury University was intended as a simple prank, an exercise in cultural consciousness-raising, or a political false flag operation calculated to foment civil unrest, but it is clear that the school is hiding behind a privacy law in order to refuse to say who did it and try to keep a lid on details.

The fake hate crime consisted of a childish drawing on a whiteboard of a crying stick figure hanging from a noose. The N-word appears beside an arrow pointing to the body and below it the phrase “#WhitePower” appears.

The drawing was discovered inside the school’s Blackwell Library on April 10, around the time of the university’s annual “Stop Hatin'” week, a feel-good observance promoting diversity and acceptance.

“Diversity is a core value of SU, and reports of such acts are taken seriously,” declared angry university president Janet Dudley-Eshbach. “The university will not tolerate this kind of language or behavior.”

Dudley-Eshbach said she was “heartened to see many members of the campus come together” during “Stop Hatin'” week.

But a hate-crime investigation by campus police determined no crime had actually been committed.

“Regardless of who created the drawing, we find such actions demeaning to all members of the campus community and against our core values,” huffed university spokesman Richard Culver.

Salisbury University is far from alone.

A century and a half after the abolition of slavery, America is such a demonstrably un-racist country that left-wing race hustlers have to invent fake racial incidents in order to keep “hate” alive. It’s their livelihood after all.

Although race-related hoaxes are nothing new, in recent decades entrepreneurial political agitators like Al Sharpton and Jesse Jackson Sr. have found ways to monetize lies, racial resentment, mass hysteria, and violence while advancing the Left’s agenda.

Sharpton has been particularly successful during the Obama administration.

A trusted adviser to President Obama, Sharpton muscled his way into the national scene spotlight when he inserted himself into the Tawana Brawley saga in 1987. Then-15-year-old Brawley falsely accused six white men of raping her in Poughkeepsie, N.Y. The African-American girl was reportedly admitted to hospital smeared with feces and with the N-word, “KKK,” and “bitch” written on her torso. Criminal charges went nowhere and one of the accused men won a defamation suit against Brawley.

It was only a matter of time before this Sharpton-style contagion spread to the education sector.

For example, no Duke University officials have been held to account for attempting to frame three young white males on the school’s lacrosse team for the claimed rape of Crystal Mangum, a black female stripper and prostitute, at a party in Durham, N.C. in 2006. (Mangum is now serving a 14-year prison term after being convicted in 2013 of second-degree murder in the stabbing death of her boyfriend.)

Richard Brodhead, who helped lead the professor-supported lynching of his own student athletes is still the school’s president. “I am certainly at ease in my conscience with the role that I played,” he said recently. After rape charges were dropped, the district attorney in the case, Mike Nifong, was quite properly disbarred for his outrageous prosecutorial misconduct in the case.

Sounding candid and perhaps a bit too charitable toward his colleagues, former New York Times public editor Daniel Okrent said the fake gang rape story took off because it pushed all the right politically correct buttons that send thrills up the legs of left-wing journalists.

“It was white over black. It was male over female. It was rich over poor. It was educated over uneducated,” Okrent in the recent ESPN documentary Fantastic Lies. “My god, all the things we know happen in the world coming together in one place. And the journalists start to quiver with the thrill when something like this happens.”

There were plenty of race-related hoaxes, along with false flag operations calculated to foment racial hostility and perhaps violence, on the nation’s university campuses last year.

In an incident of mass hysteria in November, students at the troubled University of Missouri imagined Klansmen were invading the Columbia campus. The student body president Payton Head, a black man and Black Lives Matter supporter, helped spread panic by falsely confirming the KKK was on campus.

The same month University of Delaware students and administrators claimed nooses were hanging from trees following a Black Lives Matter rally. It turned out the “nooses” were wires used to hold paper lanterns from a previous event.

But the truth is no defense to hate-crime hysteria. UD acting president Nancy Targett insisted the incident was proof more anti-racism work was needed on campus. “The sensitivity of our campus to this potential issue clearly indicates a need for continuing dialog within our community,” she said.

In April last year, students at Duke University lost their minds when an unidentified foreign student left a piece of yellow cord that resembled a noose on a tree. Its discovery was followed by an anti-racism rally attended by 1,000 people and demands for harsh punishment for the noose-hanger. It turns out the student was making a visual pun. The cord was posed to take photos to encourage the student’s friends to “hang out” on “such a nice day outside,” and afterward the individual said he “carelessly forgot the noose hanging on the tree … rather than discarding it, as I should have.” He added he lacked “cultural awareness” and didn’t know the noose had a specific meaning in the South “because of my background and heritage.”

In November black student Emmanuel D. Bowden of Saginaw Valley State University in Michigan took to social media to threaten “to shoot every black person I can on campus” the following morning. Facing a backlash, Bowden pointed out he was black and wrote that “I was going to give it an hour to see how you all would react.” He was later arrested.

Kayla-Simone McKelvey, an African-American graduate of Kean University in New Jersey, was arrested in December for using a school computer to post a threat on Twitter to “shoot every black woman and male” at the school. The self-described race activist, who was arrested, used the handle @keanuagainstblk (“Kean University Against Blacks”) to tweet that her group was “for everyone who hates black people.”

In September a black graduate student named Ashley Powell posted “White Only” and “Black Only” signs close to bathrooms and water fountains at the State University of New York at Buffalo. It turns out the student put the signs up as performance art. Outrage ensued and the police were called. Powell blamed “white privilege” for her actions in a lengthy statement published in a campus newspaper.

This is not an exhaustive list. Race hoaxes take place constantly.

American Thinker editor Thomas Lifson has long been skeptical of the seemingly growing incidence of hate-related events on campus.

Lifson opines “that there is simply not enough hate to go around,” and that “supposedly anti-hate groups and individuals are manufacturing phony hate incidents.”


“The psychology involved sometimes is complex, revolving around self-hate, but in other instances, it is purely commercial – the opportunity to raise money, or bullying – the opportunity to intimidate spineless college administrators into meeting demands for (variously) ethnic or sexuality studies programs faculty slots, student centers, or any of the other baubles purchased out of the high tuitions and student activity fees extorted in return for a degree.”Thomas Lifson

Lifson is right, of course. [NOTE: Especially since DHS has given $20M for 2016 to Nonprofit Security Grant Program. An increase in “hate incidents” means a bigger slice of the pie. —STAFF]

Which suggests the epidemic of race hoaxes on America’s college and university campuses isn’t likely to subside any time soon.

After exposing the laughable SPLC’s Post-Trump hate report, they published a list entitled “Likely False Reports” of bias incidents. You know, “Hate Hoaxes”. The SPLC omitted reports of “At least 2,000 educators around the country reported racist slurs and other derogatory language leveled against white students…, a number greater than the total of 1,094 Bias Related Incidents as reported on December 16…”