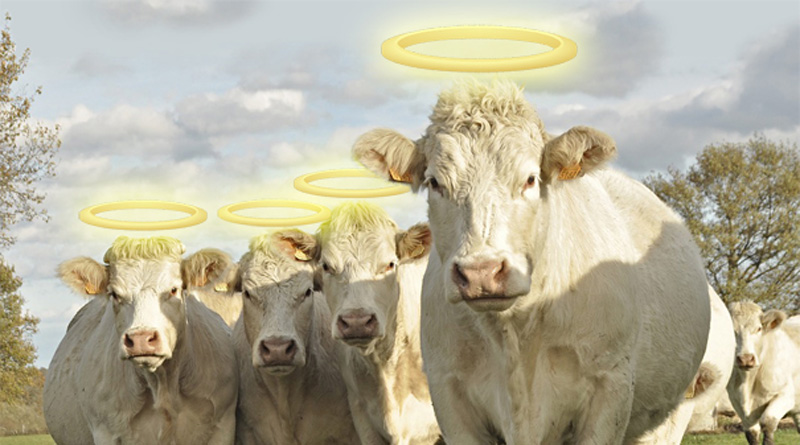 By any reasonable definition, blacks are a malignancy on the American body politic. They are synonymous with violent crime, property crimes, heroin, “crack” cocaine, welfare, illegitimacy and illiteracy. Despite this, blacks enjoy a special and privileged status in America: They are the “Sacred Cows” of Cultural Marxists, and are treated accordingly.

No matter how ignorant, dangerous, lazy, dependent, witless, expensive, ineducable, or addicted blacks may be, America’s Cultural Marxists see to it that they are constantly placated by satisfying every demand they make. All blacks need to do is ask and it is granted, whether it’s our Trillion-dollar per year welfare state, race quotas for black incompetents, or the forced “integration” that has destroyed once stable neighborhoods and handed over the public schools to functionally illiterate black criminals in every large city.

The only item evading their grasp that appears on their “wish-list” is “Reparations” for slavery. I suspect they’ve been denied “Reparations” for the simple reason that, by now, most whites recognize slavery to be the last honest work most blacks ever engaged in before they became chicken thieves, drug-dealers, pimps, whores, armed robbers, burglars, welfare-scammers, auto thieves, and identity thieves. There would certainly be a violent revolution if our “Political Class” were to betray us even further by transferring to blacks the amounts their “leaders” demand as “Reparations.”

The latest black enthusiasm is a war against Southern Heritage and its monuments depicting the Confederacy’s greatest heroes. While most blacks couldn’t tell you in what century the “Civil War” was fought –- or who the antagonists were –- their corrupt and witless leaders at the National Association for the Advancement of Criminal Prevaricators (NAACP,) feel it is a good political tactic to try to destroy the South’s cultural heritage by dismantling its icons. In this, they are merely doing the bidding of their Jewish masters in the Corrupt Leftist Media, whose playbook comes straight from “The Protocols of the Elders of Zion.”

In a way, this is understandable: Except where white men have graced their “mud” cultures, every black African culture in history has failed to evolve beyond the Stone Age, and has never developed a written language. While the average black I.Q. of 85 in the U.S. means that blacks are mildly retarded by white standards, in most of black Africa, the average I.Q. is 35 to 40 points lower than whites: This disparity reveals blacks to be profoundly retarded by white standards, and it probably represents hundreds of thousands of years of stagnated evolutionary development, if not millions.

Clearly, the tactic of envious black leaders in the NAACP is to attempt to destroy the superior cultures created by whites, in a futile attempt to make their own inferior cultures appear more “impressive.” In this they are much like the proverbial pygmy who was convinced he would appear taller if he were to chop off the legs of all those of greater height. Such an agenda necessarily requires that blacks destroy all of North America and Europe –- and a great deal of Central Asia as well—in order to prevent any unflattering and nagging comparisons. Yet, if the past is any guide, blacks are clearly up to the task.

New Orleans is the site of the most recent outrage of this kind, accomplished by its scalawag Mayor, the most recent in a long line of traitors and crooks bearing the name Landrieu. In attempting to pacify his apish constituents, he has ordered the removal of the Robert E. Lee, Jefferson Davis and P.T. Beauregard statues, and the Monument to the Confederate Soldier, a travesty that was accomplished by May 19th. These statues were found adjacent to piles of trash and damaged autos in a city maintenance yard.

Only a communist traitor would order the removal of historic monuments which were approved by a deliberative body and funded by private organizations. So-called “Democrats” like Landrieu really are the New Marxist Party, and they have no more regard for Rule of Law than they have for Southern Heritage, as they have demonstrated on thousands of occasions.

Nevertheless, a hero has finally emerged, and a man worthy of his own Southern heritage. Louisiana State Rep. Thomas Carmody (R-Shreveport,) has introduced a bill to protect and defend Confederate Monuments across the state. Carmody’s Bill (LA HB71) prohibits local governments from removing plaques or statues of military figures or historical events without a public vote.

The Carmody Bill passed the Louisiana House overwhelmingly, by a 65 to 31 majority. Naturally, the entire Louisiana Black Caucus voted against it, probably for the reasons explained earlier. Now it is important to keep a very close eye on Louisiana Senate voting, and make certain that anyone who fails to defend their heritage will pay a very steep price for their cowardice. Being AWOL or abstaining on the vote should be considered unacceptable.

The first duty of decent people is to make New Orleans pay for its treachery by boycotting the city until the monuments are properly restored. New Orleans is a filthy place that smells like a sewer, anyway, and a place fit only for drunks, whores and queers. Mardi Gras calls to mind Sodom and Gomorrah.

Finally, someone should attach an Amendment to the Carmody Bill, requiring New Orleans to return all four monuments to their original condition within one year of enactment of HB-71, and it should be done at the city’s own expense.

If necessary, withhold money from New Orleans until all four monuments are returned to their original condition. Hell, audit the Mayor’s Office, too!