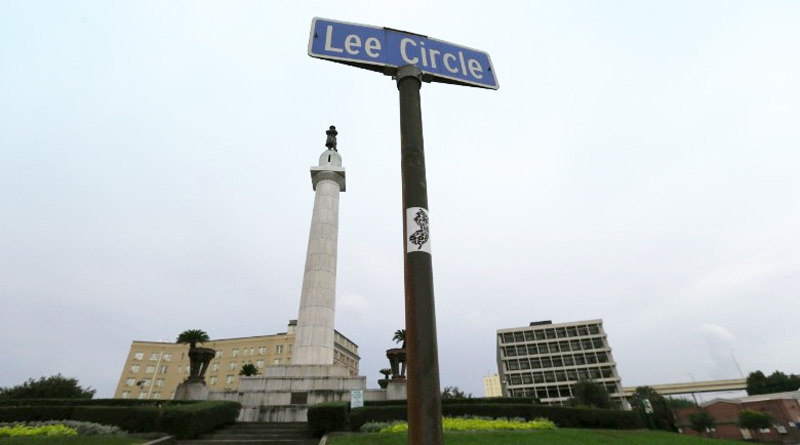 As many onlookers cheered Friday, a crane hoisted the statue of Confederate Gen. Robert E. Lee from the top of a monument in New Orleans.
It is the fourth, and final, Civil War-era landmark the city has removed since late April.

The effort to remove New Orleans’ monuments has been part of a nationwide debate over Confederate symbols, which some argue represent slavery and injustice and others say represent history and heritage.

“Na na na na, hey, hey, hey, goodbye!” some in the crowd cheered as the statue was lowered onto a flatbed trailer.

Earlier, with work underway, Mayor Mitch Landrieu explained the city’s reasons for removing the statue and other monuments at a private address.
The historical markers “celebrate a fictional, sanitized Confederacy, ignoring the death, ignoring the enslavement, ignoring the terror that it actually stood for. And after the Civil War, these monuments were part of that terrorism as much as burning a cross on someone’s lawn,” Landrieu said.

In a speech about the removal of the monuments, the mayor said they were landmarks that were not a true reflection of the city.

“To literally put the Confederacy on a pedestal in our more prominent places — in honor — is an inaccurate recitation of our full past, is an affront to our present and it is a bad prescription for our future,” said Landrieu, the city’s first white mayor since 1978, who is in his final term presiding over a city that is 60% African-American.

The monuments will be stored then relocated, city officials have said.

The column on which the statue stood will remain, and the city will add a water feature.

Streets near the city’s Lee Circle — where the Robert E. Lee monument has stood for 133 years — were blocked off by early Friday in preparation for the dismantling that’s scheduled to begin sometime before 5 p.m. CT.

The city started removing the public landmarks in late April, after the New Orleans City Council voted in 2015 to remove the four Confederate markers. Recent court rulings cleared the way for the monuments to be removed and relocated following heated public debate and legal fights.

A small crowd — including some supporting the removal and those opposing it — gathered outside the barricaded area throughout the morning. A few men had a heated exchange after someone took an American flag from a Lee monument supporter, CNN affiliate WVUE reported.

Tempers cooled when police recovered the flag and returned it. As the day went on, the crowd grew to about 100 people, the station reported.

The Lee statue, erected in 1884 in honor of the commander of the Army of Northern Virginia, is arguably the most prominent of the four because of its location at Lee Circle, a major traffic hub at the edge of the Lower Garden District and the Central Business District.

The city’s famed Uptown streetcar line wraps around the circle, and nearly all Carnival parades traverse it near the end of their route.

The statues were erected decades after the Civil War to celebrate the “lost cause of the Confederacy,” a movement recognized across the South as promoting white supremacy, according to a news release from the mayor’s office.

Friday’s removal — in daylight, with the timing announced a day beforehand — contrasts with the first three, which happened in the dark of night or early morning with little notice.

The city had kept quiet about the timing of the earlier ones, citing what it said were threats that some had made toward contractors who would do the work.

One thought on “Last Confederate Monument Removed in New Orleans”