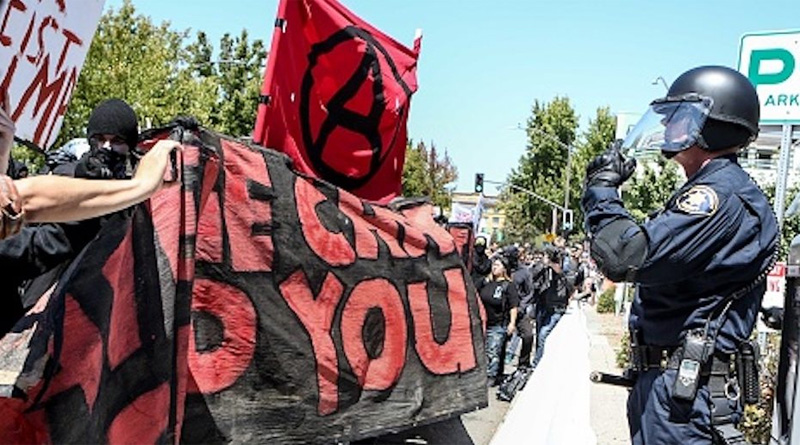 Public school teachers are behind a leading far-left militant group that is part of the Antifa network that federal officials say is committing “domestic terrorist violence.”

By Any Means Necessary, which has played a key role in riots in Berkeley, Sacramento and elsewhere, has dozens of public school teachers among its members, including among its most prominent leaders.

The FBI and Department of Homeland Security began paying closer attention to Antifa groups in general after BAMN and other extremists started a riot and attacked marchers at a white nationalist rally in Sacramento last July, Politico reported on Friday. The Sacramento violence left at least 10 people hospitalized, several of whom had knife wounds.

One of BAMN’s most prominent organizers is Yvette Felarca, a Berkeley middle school teacher and pro-violence militant. Felarca currently faces charges of inciting a riot for her role in the Sacramento violence.

After BAMN and other antifa groups staged violent protests in Berkeley to keep right-wing author Milo Yiannopoulos from speaking, Felarca defended her group’s acts of violence. BAMN was able to cancel another event, this time an April speech by pro-Trump author Ann Coulter, by promising a repeat performance of the Milo riots. (RELATED: ‘INFERNO’ — Milo Speech Cancelled After Rioters Set Campus Ablaze [VIDEO])

The FBI and DHS say Antifa groups like BAMN are engaging in “domestic terrorist violence,” according to the Politico report.

BAMN’s members appear to be mixing their far-left activism with their roles as teachers. (RELATED: Documents Tie Berkeley Riot Organizers To Pro-Pedophilia Group)

BAMN organizer and high school teacher Nicole Conaway organized a “sickout” at her school in 2015, leading other teachers in calling in sick to protest the policies of Republican Gov. Rick Snyder. The sickout forced six Detroit-area schools to cancel classes, affecting nearly 4,000 students.

One month later, Conaway led students in a school walkout protesting poor building conditions. She was one of three BAMN organizers arrested in connection with the protest. Other BAMN members have led similar protests at the schools where they teach.

In Berkeley, Felarca and other BAMN members repeatedly abused their positions of influence over students in service of their own radical goals, Berkeley’s public school district charged in court filings obtained by local news organization Berkeleyside.

Despite repeated warnings, the district said Felarca continued to try to recruit students into her radical organization, including during work hours. The leftist teacher frequently tried to bring students on school-sponsored trips to BAMN-related activities, the district said, describing the trips as attempts to “indoctrinate” the students.

The school district accused Felarca and other BAMN members of weaponizing students to derail disciplinary hearings for Felarca, after student protesters repeatedly swarmed into the disciplinary hearings. The school district claimed that Felarca and other BAMN members “were actively trying to brainwash and manipulate” students to serve her “own selfish interests,” calling her conduct “particularly reprehensible.” Felarca continues teaching today.

Oakland Technical High School teacher and BAMN member Tania Kappner worked with Felarca this past January to organize students and teachers in a walkout in protesting Trump. Kappner was identified in the media as a BAMN member as early as 2011.

BAMN is active within both the National Education Association — the nation’s largest teacher’s union — as well as with local and regional teacher’s unions in Michigan and California.

Last year, 17 different BAMN members ran for elected positions on the Detroit Federation of Teachers, according to a newsletter sent out by the DFT. BAMN also ran five candidates for different national leadership positions with the NEA in 2017.

When the Berkeley school district suspended Felarca for her violent activism in 2016 (for which she was charged with inciting a riot), the local teacher’s union sued the school on Felarca’s behalf.

In January 2015, BAMN organizer Steve Conn was elected president of the Detroit Federation of Teachers. The DFT’s executive board charged Conn with misconduct later that year and removed him from office.

Conn and his wife, former teacher Heather Miller, were fired back in 2007 after leading a student protest that resulted in students being pepper sprayed. The couple sued and got their jobs back, in addition to a $300,000 settlement. Conn continues teaching today at Western High School.

BAMN was founded by the Revolutionary Workers League, an openly Marxist organization, in 1995.

One of BAMN’s founding members is on record identifying as a NAMBLA member, calling the pro-pedophilia group the victim of a “witch-hunt.” (Read TheDC’s full story on the ties between NAMBLA and BAMN here.)

One thought on “Public School Teachers Behind Violent Antifa Group”