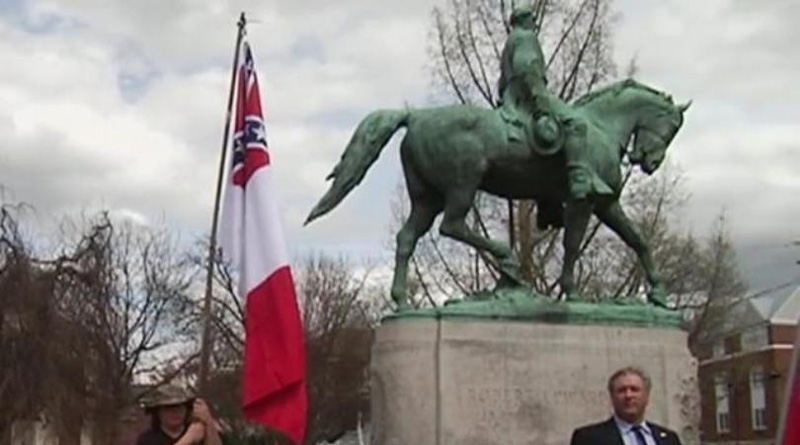 Why is it when Blacks gather for their interests (Example: BLM) it’s considered activism? Or if Hispanics gather to protest deportations and immigration it is considered activism? The same when the NAACP protest — it is called social justice? But when Whites organize in their interests it is denounced as “hate” or they are called “White Supremacists”, “Racists” or “Nazis”? You don’t realize that it is YOU — the media and our elected officials — that is creating the gathering storm by painting things this way. You wanted identity politics, now you got it.

ZeroHedge writes that Fox News reporter Doug McKelway was in attendance during yesterday’s deadly events in Charlottesville, VA, where he reported that the police were called off as soon as things started turning violent.

“But when the tear gas started to fly, thrown by protesters, the police themselves began to evacuate then. I asked the guy who was in charge, ‘Where you going?’ He said, ‘We’re leaving. It’s too dangerous.’ They had a chance to nip this thing in the bud and they chose not to.“

Of note, “Unite the right” held a rally which was legally organized with a permit from the city, as was their first amendment right to do so, and Antifa showed up with cement-filled cans and other weapons with plans to violently protest the event – creating a dangerous atmosphere which the police did nothing to control.

ACLU confirms that police were given stand-down order. This invited the violence the city used to shut down a court-permitted protest. https://t.co/FQUhcYaIIm

The ACLU confirmed that Charlottesville police were ordered to stand down, which allowed the KKK and Antifa to meet face to face with no interference. Did Mayor Signer and the police deliberately stand down after organizer Jason Kessler was granted permission to hold the rally in Emancipation Park as originally requested? Some speculate that the stand down order was used to declare the rally an unlawful assembly. Was it a conspiracy to deny the Judges ruling to allow the rally?

Some have suggested that the violent atmosphere and lack of police presence was a factor in the decision and ability of 20 year old James Alex Fields to drive his 2010 Dodge Challenger into a crowd of counter-protesters, killing 32 year old paralegal Heather Heyer and injuring dozens of others. However, video raises questions as to whether Fields crashed into a crowd of protesters or into the rear of a car that was blocked from moving by more than 100 Antifa protesters.

Fields is expected in court on Monday at 9AM to face one charge of 2nd degree murder, three counts of malicious wounding, and one count of hit and run – which was filmed from several vantage points, including a drone which happened to be above the scene of the crime. The police later stated that the death was not “malicious”…

On July 7, 2016, Micah Xavier Johnson ambushed and fired upon 12 white police officers in Dallas, Texas, killing five officers and injuring nine others. Two civilians were also wounded. Johnson was an Army Reserve Afghan War veteran who was reportedly angry over police shootings of black men and stated that he wanted to kill white people, especially white police officers. The shooting happened at the end of a protest against police killings of Alton Sterling in Baton Rouge, Louisiana, and Philando Castile in Falcon Heights, Minnesota, which had occurred in the preceding days. The Obama White House refused to label Black Lives Matter a terrorist organization.

Following the shooting, Johnson, who claimed he did these shootings in the name of Black Lives Matter, fled inside a building on the campus of El Centro College. Police followed him there, and a standoff ensued. In the early hours of July 8, police killed Johnson with a bomb attached to a remote control bomb disposal robot.

Some have suggested that the violent atmosphere and lack of police presence was a factor in the decision and ability of 20 year old white supremacist James Alex Fields to drive his 2010 Dodge Challenger into a crowd of counter-protesters, killing 32 year old paralegal Heather Heyer and injuring dozens of others. Fields is expected in court on Monday at 9AM to face one charge of 2nd degree murder, three counts of malicious wounding, and one count of hit and run – which was filmed from several vantage points, including a drone which happened to be above the scene of the crime.

A drone captures the moment a car crashed into the rear of a car blocked by leftist protesters crowding the street and surrounding vehicles… In this aerial video the Challenger has left… but there is a crowd of leftists in the intersection!?

A drone captured the terrifying moment a car plowed into the crowd in #Charlottesville, Virginia. pic.twitter.com/N9mVUpEPm3

Images show the Dodge Challenger crashed into the rear of a car blocked by counterprotesters who are blocking the street. The car did not “ram a group of counterprotesters” as the media and Terry McAuliffe say. “A silver Dodge Challenger suddenly came barreling through and smashed into another car,” said Matt Korbon, a 22-year-old University of Virginia student, “The impact hurled people into the air and blew off their shoes.” Heather Heyer, 32, was killed as she crossed the street.

Next, the challenger crashes into to the rear of a car that is blocked on the road by these idiotic protesters. Watch how they swarm the car with weapons and break the car’s windows. The driver was punched in the face according to witnesses. The driver had to flee the scene because he was in danger… [Video: Courtesy of NBC/TMZ]

4 thoughts on “Media Disinformation And Hysteria In Charlottesville”