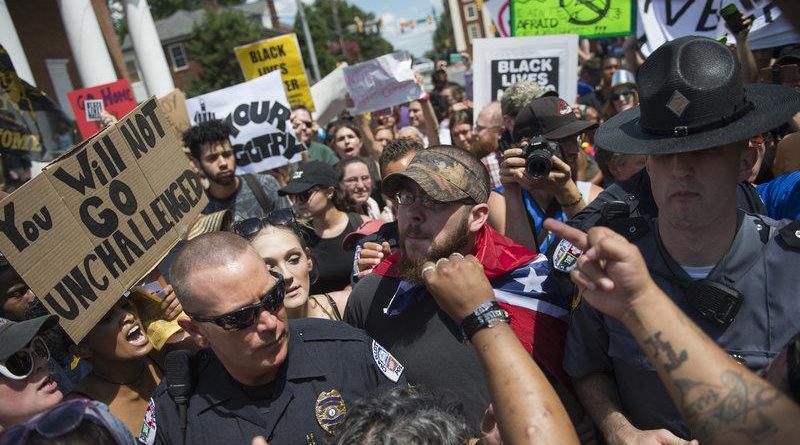 Despite urging from the city’s mayor to ignore the racist group, about 1,000 people showed up to protest a few dozen members of the Ku Klux Klan who gathered in Charlottesville, Va. Saturday.

Klan members had called for a rally to oppose the city’s plans to remove a statue of Robert E. Lee, the Confederate general. About 30 to 50 Klan members were escorted by police to and from the city’s Justice Park.

But counterprotesters surrounded and largely drowned out the small group of Klan members.

The Klan finally arrived (heavily protected by the police). All 30 of them. Many hundreds of anti-racists. #Charlottesville #BlocKKK #KKK pic.twitter.com/Hjzrt2YQHp

The KKK arrived around 3:45 p.m., according to the Charlottesville Daily Progress. Klan members only stayed at the scene for less than half an hour, Hausman reports. When they began to leave, “the crowd tried to stop the Klansmen from driving off” she says.

“People should be able to respect our heritage,” said Amanda Barker, who identified herself on Saturday as a member of the Ku Klux Klan. She added that she was underwhelmed by the number of people who had turned out to oppose the rally.

At one point, the police again ordered the crowd to disperse, but the protesters remained entrenched. City spokeswoman Miriam Dickler said the Virginia State Police then released three canisters of tear gas.

“The crowd immediately dispersed,” she said.