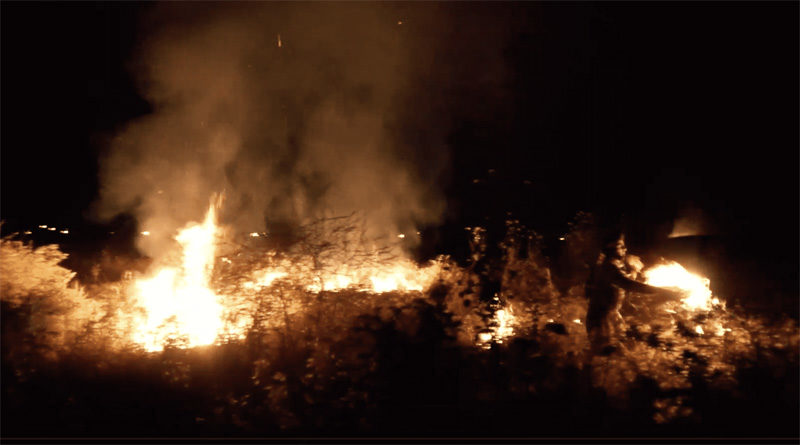 From Jan. 1 through Sept. 17, 42,512 wildfires have burned 6,927,327 acres across the United States, according to the National Interagency Fire Center. While Americans view these numbers with alarm – there were 37,274 wildfires over the same period last year – terrorists have turned blazes into incitement propaganda and recruitment pitches, spotlighting wildfires’ devastating effects to their followers and encouraging lone operators to spark their own infernos.

From 2015 to 2019, 88 percent of wildfires were caused by humans, according to a Sept. 1 Congressional Research Service report, though lightning caused bigger blazes on average. Manmade does not mean all of those were arson: humans can accidentally start wildfires – from things like campfires, discarded cigarettes, power lines, controlled debris burns, sparks from equipment, fireworks in parched terrain, etc. – or intentionally set blazes. The California Department of Forestry and Fire Protection estimated 7 percent of the Golden State’s wildfires have been set by arsonists, who are rarely caught, often spark multiple fires, and may even have a background in firefighting.

If someone is setting a fire for a cause – the definition of terrorism being acts committed to further an ideological agenda – they’re going to want someone to know about it. Terror tutorials have emphasized that the arsonist not get caught so they can go on to set more fires, but they’ve also been adamant about the arsonist leaving some sort of identifier to pin it on the terror group. If ISIS were to set a wildland blaze, one could expect – like they have done in Iraq – the release of footage or photos of their deeds, and a claim that, if the arsonist has not yet been arrested, does not identify their operative. This evidence to back up a claim could also depend on whether there are one or multiple individuals involved in the crime: a lone attacker, depending on his or her experience with firesetting or familiarity with the area, may be quick to bail from the scene in order to avoid detection or injury and may not stick around to capture the visuals craved by ISIS propaganda producers. 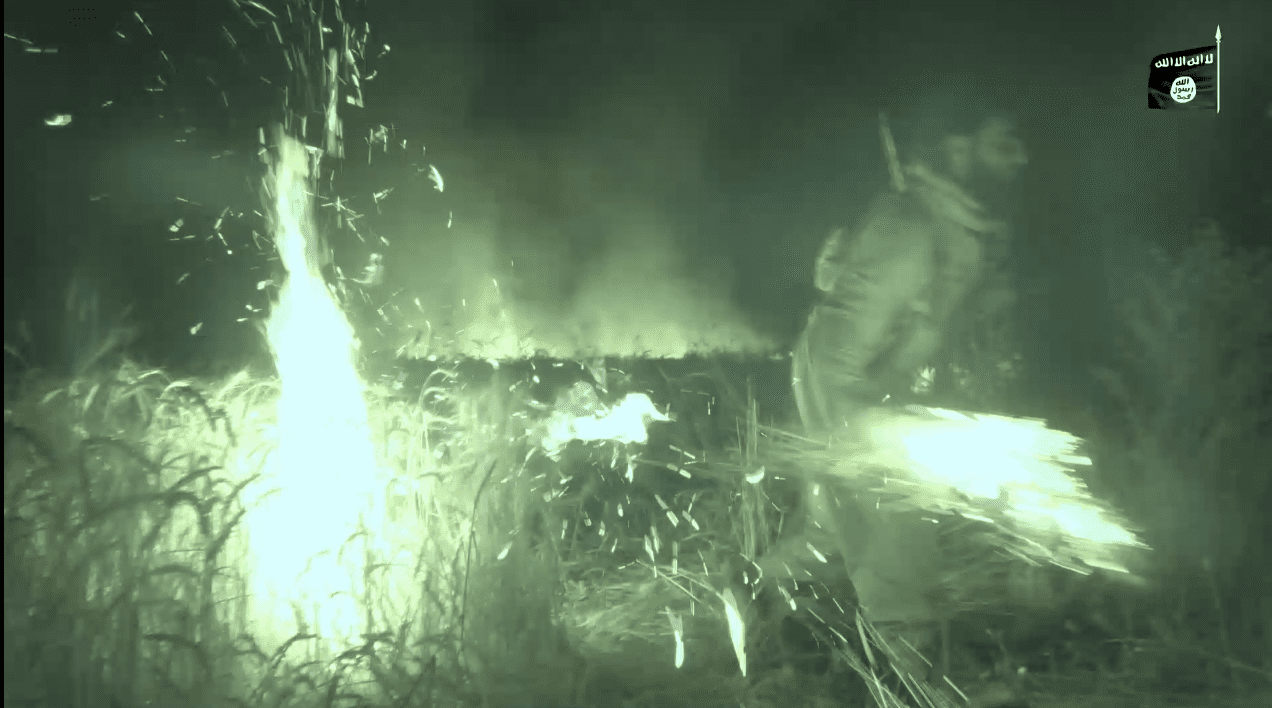 A terror group reporting on an event to its members, lauding it or otherwise telling followers to emulate it is not the same as claiming credit, which usually occurs with overt and unambiguous wording. ISIS initially claimed credit – without offering any evidence – for the 2017 mass shooting in Las Vegas, but after no links were discovered between the shooter and religious or political extremism ISIS continued to lift up the attack as something the group’s followers should try. Sometimes they highlight natural disasters that can cause regional instability or vulnerable infrastructure. Similarly, ISIS doesn’t include reports about wildfire damage in its weekly al-Naba newsletter because readers are interested in forest management: the inclusion of the news is intended to impress upon followers that all of this damage can be caused with low-tech firesetting.

Terror groups are attracted to the tactic of wildland arson for multiple reasons. They see the damage that the larges blazes inflict, and that falls into line particularly with al-Qaeda’s stated goal of aiming for actions that have a crippling economic impact on the West. They see the potential for substantial casualty counts in either blazes ignited near residential areas or more rural conflagrations that whip up into fast-spreading, out-of-control monsters. And utilizing simpler terror tactics – without constructing complicated explosive devices or buying firearms, or needing a partner or cell – means they can recruit from a larger, low-skill pool of potential recruits. This fits into the trend of recruiting would-be terrorists where they live and having them conduct attacks in the backyards they know well instead of sending an unfamiliar operative into the region or needlessly pulling the recruit to a foreign training camp. Simple tools, solo operation, virtual training and open-source online tutorials also lessen the chance that a recruit would be detected in the planning stages. And terror tutorials have also offered pointers on terrain and weather conditions to help arsonists become armchair meteorologists and pick the best time and location to start blazes.

The fire season was already in full swing at the end of July when ISIS’ official Al-Hayat Media Center released a 4-minute video titled “Incite the Believers” in both English and Arabic. “Consider which you can use easily and without drawing attention to yourself and making the result be death, destruction and heavy losses to the enemies,” the narrator stated. “Yes, my brother, it is that weapon which is within reach of every hand and even children are proficient using it, and people have used it since ancient times to harm their enemies — yes, it is fire.” A graphic displayed ratings for different types of terror tactics and gave firesetting five stars.

“To become more convinced of this option try looking for the losses caused by fires in the lands of the crusaders every year — fires in forests and fields, cities and villages completely destroyed, people displaced, armies of firefighters and civil defense personnel working continuous days to no avail,” the narrator continued, noting that death tolls in major blazes sometimes “exceed the number of those lost in major strikes by the mujahideen in which they used guns and explosives.” Examples of death tolls were displayed for wildfires in Australia, Greece and California – specifically, the death toll of the 2018 Camp Fire that destroyed most of the town of Paradise. That blaze was sparked by a faulty power transmission line.

Tactically, the video advised would-be jihadists to “monitor well for a place where you can set a fire without drawing attention” and “consider that the fire will be so great that efforts made to extinguish it will cost your enemies greatly and perhaps they will not be able to put it out” before it spreads out of control. The video showed animation of a hand marking a spot on a map between San Francisco and Sacramento. The graphic then lit on fire, burning through the California map. The video also urged arson jihadists to “safely dispose” of evidence after fleeing the scene of their attacks.

Like most open-source materials published by terror groups, “Incite the Believers” can still easily be found on the internet and is among the tutorial materials and calls to action that are available for extremists of any ideology to reference and use.

Has ISIS set wildfires? Yes. They’ve boasted about it, shot video in the act, and turned it into a propaganda film. The targets have been crop fields in Iraq and Syria, with the intention to terrorize the landowners, inflict economic losses and potentially casualties while keeping a community on edge about where the surreptitious firesetting might happen next. ISIS claimed in May 2019 that the terror group was behind a series of wildfires: In the ISIS newsletter al-Naba article “Roll Up Your Sleeves and Begin the Harvest – May Allah Bless What You Reap,” ISIS reminded “soldiers of the caliphate” that they “have before you millions of acres… their plantations, fields and homes, as well as their economic foundation” to burn. A 49-minute video released this May by the terror group, “Strike Their Necks,” featured ISIS-shot nighttime footage of a small group of terrorists setting brush fires. Some Iraqi farmers have reported that these were complex attacks: If they tried to go out and extinguish the flames in their fields, they could be attacked by terrorists lying in wait.

And ISIS seizes upon current events to nudge would-be jihadists into their own independent attacks while the story is hot. As France was hit by wildfires last summer, a propaganda poster depicting emergency vehicles racing toward a burning hillside circulated among ISIS supporters, urging followers to “light fires in forests and fields and in houses and we are speaking more particularly to those who live in Europe and America. It will hurt them.”

When it comes to writing the manual on wildfire arson terrorism, though, al-Qaeda penned a magazine tutorial, complete with step-by-step how-to photos, that is easily accessible on the internet today for use by any genre of extremist.

In a 62-page issue of al-Qaeda in the Arabian Peninsula’s Inspire magazine published in 2012, “The AQ Chef” – pen name also bylining the pressure-cooker bomb recipe in the 2010 “Make a bomb in the kitchen of your Mom” tutorial put to use in the Boston Marathon and Chelsea bombings – declared “It is of your freedom to ignite a firebomb.” Seven pages detail target selection, prime wildfire conditions, and how to construct an “ember bomb” to ignite once the arsonist is at a safe distance.

“In America, there are more houses built in the country sides than in the cities. It is difficult to choose a better place other than in the valleys of Montana where the population increases rapidly. In the year 2000, a fire that is considered to be the biggest in the American history flared up in one of those valleys. It spread in a space equal to that of London. The fire burnt down 70 houses as well as a hundred car. On July of the same year and in the same place, a thunderstorm lighted 78 massive blazes in just one day, most of them were deadly firestorms,” the article said, proceeding to cite other wildfires. “We mention such examples only to show the magnitude of the destructive impact that fires or firebombs make, to then ask the question: Is it possible for us to cause a similar destructive impact using a similar weapon? The answer is: Yes, it is possible. Even in a shorter time and with much bigger destructive impact.” The 2009 wildfires in California were offered as an example of the potential for steep economic impact.

What’s especially dangerous about the al-Qaeda tutorials geared toward a Western audience – which live in perpetuity on the internet, and even lived on Barnes & Noble’s website for years after being uploaded by the terror group or a supporter – is that they go beyond simply encouraging terrorists to act but give them practical D.I.Y. training to do the job. In the wildfire article, weather and geographical conditions and types of forest fires are discussed at length in order to make the blaze “difficult to handle.” Would-be arson terrorists should go into an attack having studied meteorological conditions in the area, al-Qaeda said, and map out the location to ensure structures are endangered “in an effort to cause casualties.” The terror group suggested that arsonists make “more than 30” of their “ember bomb” recipe and details strategic points to place the incendiary devices within a forest. If an arsonist followed the al-Qaeda blueprint they would definitely leave a footprint for investigators; the article suggests the arson terrorist should be “retreating to another city” after the attack. 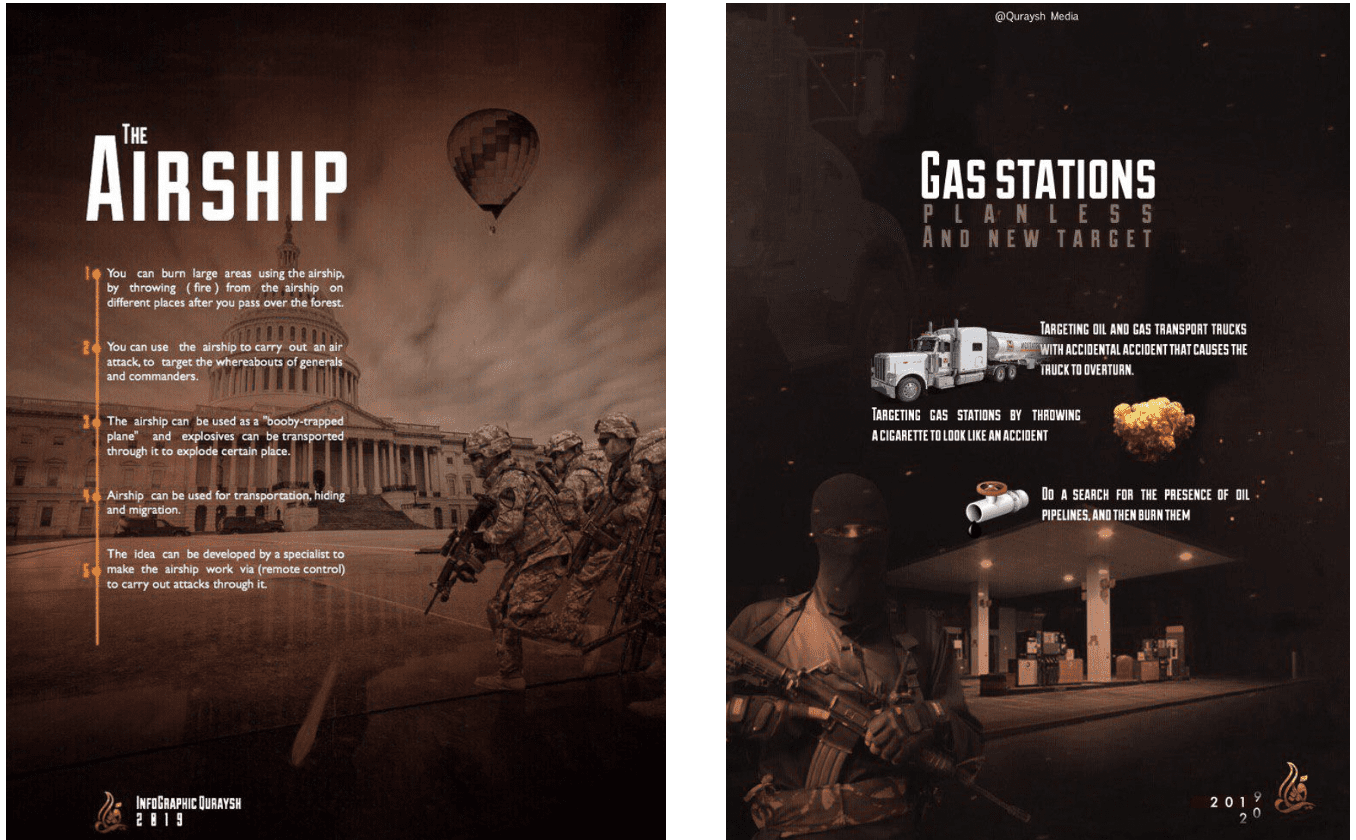