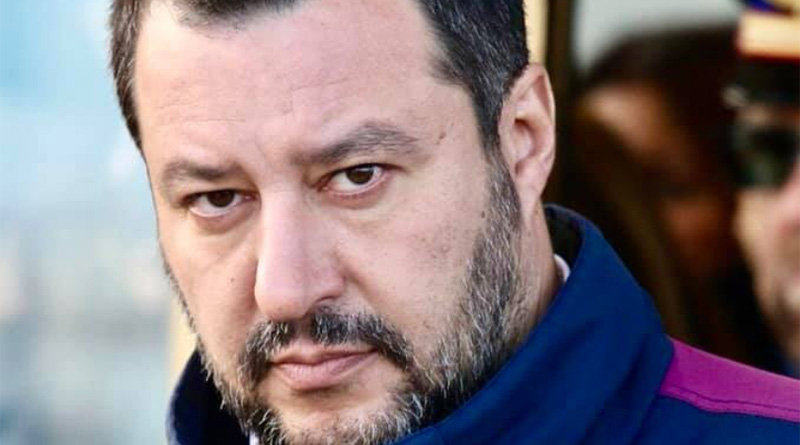 Authored by Guillaume Durocher via The Unz Review,

Really and truly, I did not expect the most promising developments in West-European politics to come from Italy. Who could predict that the strange government appointed in June 2018 – an uneasy alliance of nationalists under Matteo Salvini’s Lega and the populist-but-vague Five-Star Movement – would last as long or achieve as much as it has? Italy’s parliamentary regime is notoriously unstable, governments falling with unnerving regularity, and yet this strange hybrid has gone from strength to strength.

The globalists – notably the EU institutions and the various migrant NGOs, many supported by George Soros’ Open Societies Foundation – had adopted a criminal policy whereby the goal of their operations was not to reduce illegal immigration but to “solve” the problem by “rescuing” migrants at sea, even if they barely left the coast of North Africa, and breaking down Europe’s external and national borders. 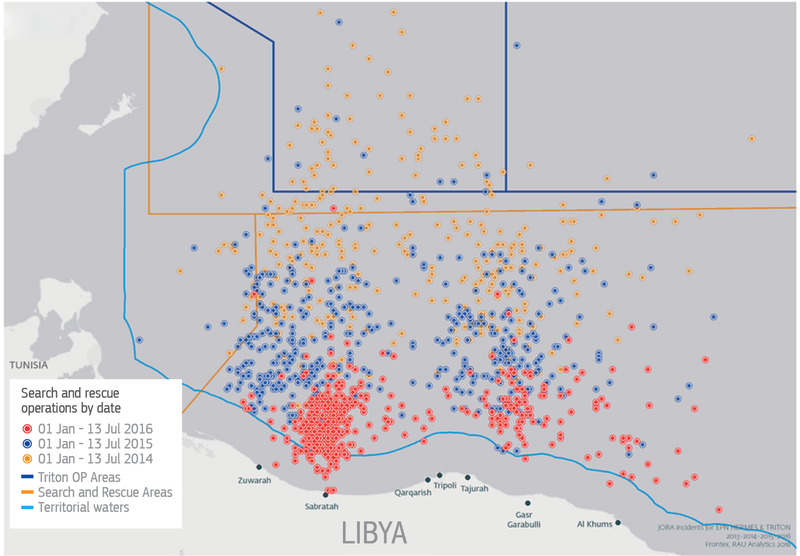 The Italians, suffering from the crushing burden of supporting an endless wave of economically useless and often violent African migrants, rebelled against this. In fact, the decline in migration had already begun under the previous center-left government, which had grown increasingly frustrated with the NGOs. In July 2017, Interior Minister and “Lord of Spies” Marco Minniti began the crackdown on NGOs which, in conjunction with other efforts, led to a sharp decline in illegal immigration by the end of the year. In this sense, the successful crackdown on illegal immigration has been possible as part of a national consensus that the country could not cope and had to actually address the root of the problem. 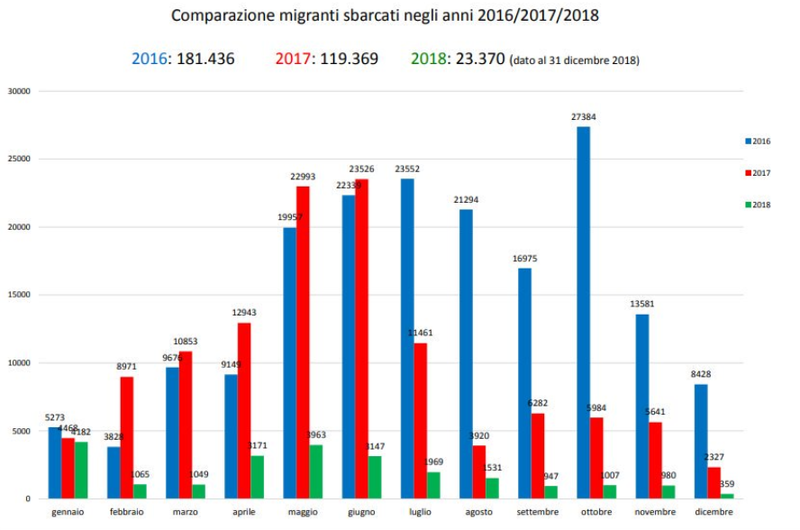 The overwhelming majority of immigration to Western nations is occurring because our governments are willingly allowing this happen, permanently changing the population against the will of their own citizens and people.

Since coming to power as interior minister, Salvini has built on the previous government’s efforts: preventing any return to previous levels (the social-democrats had not been firm on this) and further reducing illegal immigration to negligible levels. For this, his efforts must be saluted. 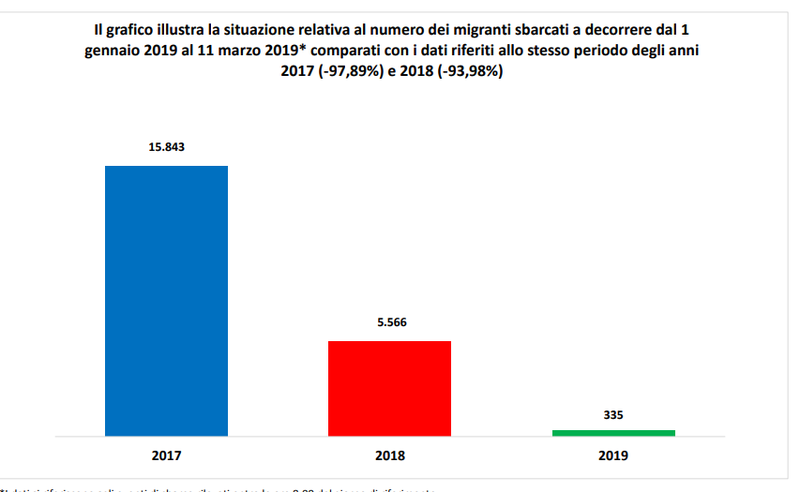 Illegal immigrants arriving in Italy for the January-March 11 periods of each year.

Furthermore, Salvini has adopted a much more confrontational attitude than his predecessors. Whereas the center-left was always embarrassed to have to take the “heartless” measures necessary to enforce Italy’s immigration laws and stop the invasion, Salvini has made a media spectacle of every step, rubbing the media-political elite’s faces in his successes. His popularity has only grown as a result.

This certainly has not been easy for Salvini. The elites hate him just as elites across the West hate all Western nationalists. Salvini has furthermore innumerable enemies among the old and decadent ruling class in Europe. When Salvini suggested that he wants to “help Italians to make more children” rather than import Africans, Jean Asselborn, the baby-boomer foreign minister of Luxembourg – a glorified tax haven – was so enraged that he was reduced to shouting obscenities: “Merde alors !”

Many Catholic Church officials have turned against Salvini, including the archbishop of Milan and the Catholic weekly Familia Cristiana (who, though claiming to be good Christians, apparently have no problem with Europe, the heartland of Christendom, becoming an Islamic land, as happened to the formerly Christian Roman Middle East and North Africa centuries ago).

Fittingly for the land which produced the poet-politician Gabriele d’Annunzio, Salvini has not been averse to mixing artistry with politics. One American magazine got worked up because he quoted the American poet Ezra Pound:

Or in Pound’s original American vernacular: “If a man isn’t willing to take some risk for his opinions, either his opinions are no good or he’s no good.” Is Pound not a staple of American civilization, still taught in high school English literature classes in the United States? Or is his name being erased from history, too painful to hear for the left, along with those of Robert E. Lee and, soon enough, Thomas Jefferson?

The courts have gone so far as to prosecute Salvini for enforcing immigration laws by leaving migrants “stranded” on a ship rather than let them land in Italian ports. Fortunately, thus far his parliamentary immunity has been preserved, thanks to the support of his Five-Star allies.

Nothing great can be accomplished in this world except by overcoming great opposition. As Salvini said recently: “Tanti nemici, tanto onore” (Many enemies, much honor).

How does Salvini do it?

We cannot underestimate the power of psychological energy. Salvini thrives on his people. Il Capitano is constantly touring Italy, throwing himself into the crowds, shaking hands, kissing babies and grandmothers, making promises, drawing from the Life-Force, getting the power and confidence needed to fight off the nation-wreckers. (See, on this, the numerous videos and pictures he uploads.) Salvini also often gets a remarkably positive response from the studio audiences of Italian TV shows.

Salvini is frequently the subject of vicious attacks, but he has a thick skin. He frequently shares the attacks against him on social media and responds with comments like “I don’t stop smiling,” “what a nice lady,” or simply “un bacio” (a kiss). By doing this, Salvini shows he is unaffected by and above such petty attacks. More practically, he responded to a “Fuck Salvini” graffiti in Brussels with a call on his supporters to give the Eurocrats a drubbing by voting for him in the upcoming EU parliamentary elections. All this can sadly only contrast with President Donald Trump, who not only has failed to deliver many of his campaign promises (above all The Wall), but resorts to attacking former supporters like Ann Coulter who dare to hold him to account.

Salvini has benefited from unique Italian conditions. Italy has, since the fall of Rome, never been the most organized country. The economic situation is poor and this no doubt contributes to Italians’ not being too comfortable and, therefore, a bit more “real” and self-interested than their naïve northern European cousins. Furthermore, there is something to what Ezra Pound called “the Mediterranean sanity.” Northern European societies, at least in modern times, have tended to be more rigorous and successful at whatever they put their minds to (see Germany: best at fascism, best at communism, best at capitalism . . .). But the northern European mind also tends to be unbalanced, too attached to abstract principles, lacking in common sense.

In short, there has never been such a taboo on far-right politics in Italy – even after the Second World War – as in Germany, Britain, or France. The comparison with France is instructive. In France, any alliance between the nationalist Front National and the mainstream conservatives was blocked at an early stage from the 1980s. This was in part due to the pressure of Jewish lobbying organizations: Le Monde reported in March 1986 that the B’nai B’rith “reminds the representatives of [conservative] parties of the pledges they undertook, during B’nai B’rith fora, before the community, . . . to in no case ally themselves with the Front National.” By contrast, far-right parties have generally been able to work with conservative parties in Italy.

Furthermore, and remarkably, Salvini is not governing as a junior coalition partner in a conservative government. Rather, the Lega is an essentially co-equal ruling party along with a populist party, the Five-Stars. The government has then been able to actually govern and deliver on their promises to their constituents.

I have long thought that nationalist governments, if given a chance, would be politically quite successful with voters. Why? Because human beings are on the whole inherently tribal and conservative – or nostalgic – by nature. Regular people don’t like to see their culture destroyed, their population replaced with strange aliens, their women raped, their people murdered by criminals and Islamic terrorists, or their nation dissolved. The over-educated media-political elites really are weirdos in this respect, completely out of touch with regular people.

Any government sending patriotic signals – authentic or not – is likely to gain politically as a result. People are reassured in the knowledge, or at least the impression, that their government is standing up for their culture and interests. But evidently, this is already too much to grasp for those who run the European Union or write for the New York Times. A patriotic government need only be honest: simply publicize the truth, highlight the reality of migrants raping and murdering our people – which occurs all the time – and you will begin to change public opinion. No one likes to see their women and children abused and murdered. Salvini did this just recently, denouncing a system which had allowed a drugged up and drunk Moroccan with a criminal record to kill two Italians with his vehicle and pledging with a Dutertist flourish to “wipe drug dealers off the face of the Earth.”

Salvini is not an anti-European, or even anti-EU as such, but has actively sought to work with European patriots in other countries. In Great Britain, the limp conservative government has gotten mired in an endless mess in its attempt to leave the European Union. In fact, renegotiating Britain’s economic relationship with a trade bloc ought to be a relatively minor matter and one of little interest to identitarians. By contrast, Salvini has insisted that he “believes in Europe,” has been conciliatory towards fellow European immigrants, and has cultivated ties with patriotic governments in Hungary and Poland. Salvini has notably called for the establishment of “an Italo-Polish axis”:

Poland and Italy will be the heroes of this new European spring, this revival of real European values, where there will be less finance, less bureaucracy, more work and more family, and above all more security.

Finally, Salvini’s core promises have been for the most part achievable. There is nothing difficult about reducing legal and illegal immigration. It is a simple and straightforward matter of will. Salvini’s successes in the face of the hostile metropolitan elites have galvanized his supporters. As a result, the Lega’s popularity has steadily increased. By contrast, Five-Stars has fallen victim to its vague ideology and unrealistic economic promises (while the government has managed to push through a deficitary stimulus budget, despite EU opposition, the country has still fallen into recession). As a result, Five-Stars have been suffering brutal losses in regional elections in Abruzzo and Sardinia, while right-wing parties have been going from strength to strength. 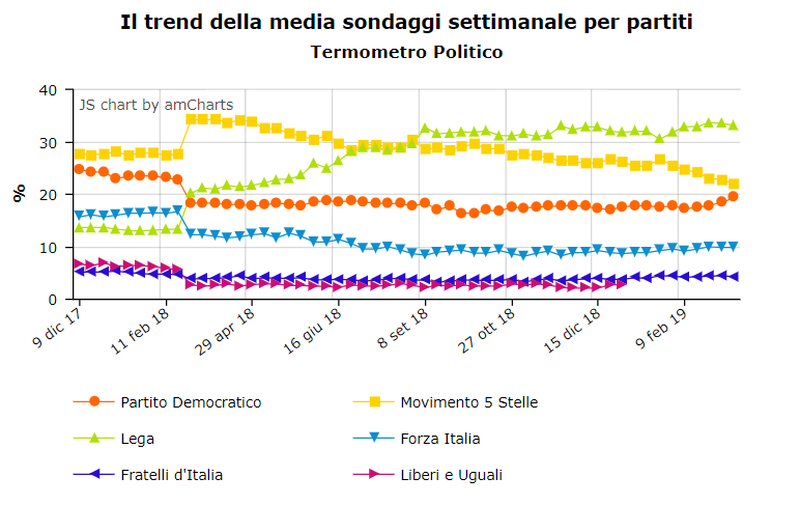 If an election were held today, a right-wing coalition (Lega, Berlusconi’s Forza Italia, and the far-right Brothers of Italy) would practically obtain a majority on their own. If the economic situation continues to deteriorate, it seems likely Salvini will ditch the Five-Stars and call elections at the height of his popularity, to form a coalition with the conservatives, Lega being the senior partner. This could enable Italy to then have healthy immigration and demographic policies, as well as the probably necessary economic reforms and stability to stem the country’s crippling brain-drain to northern Europe.

Salvini is now suggesting he will shut down the EU’s perfidious “Operation Sophia” naval mission in the Mediterranean, which had taken a leading role in encouraging illegal immigration. As one Italian official told Politico Europe:

Sophia was meant to fight people smugglers and ended up bringing 45,000 migrants to Italy. We can control our own border. We don’t need technical help to pick people up at sea.

And the magazine rightly observes that shutting down Sophia would strengthen Salvini’s hand before the upcoming EU elections:

It would trigger a predictable outcry from humanitarian campaigners and liberal-minded political opponents across Europe, burnishing Salvini’s credentials as the toughest fighter against illegal migration in the weeks before polling day. . . . Scrapping Sophia would be an easy way to manufacture a crisis and put migration — and Salvini — back in the headlines.

Say what you want about Salvini, he is a winner. And if I were to summarize his willing formula: