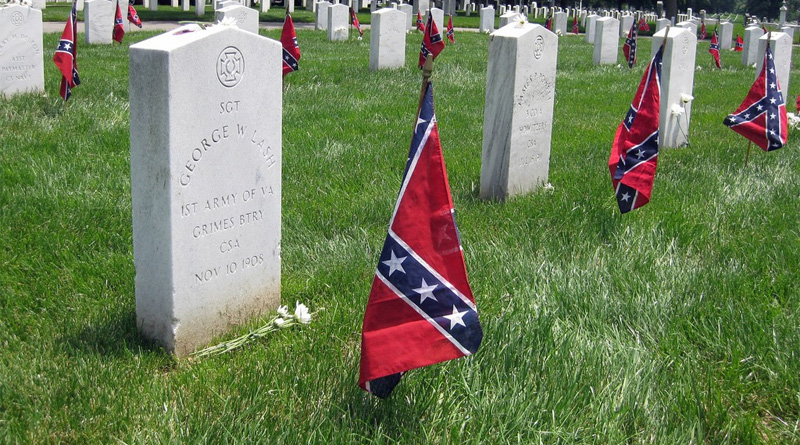 On Sunday, May 20, three dozen men and women from the St. Louis Area honored Confederate Heroes and the eternal cause of State’s Rights. They met at the Fee Fee Cemetery in St. Louis County to pay their respects.

The group was led by Bill Bowden of Warrenton, MO, a CofCC Member and founder of one of the Sons of Confederate Veterans (SCV) groups in attendance.

While addressing the attendees, Bowden commented on recent efforts in other cities to remove Confederate Monuments, and remarked that these are reminiscent of the Taliban dynamiting 1,700 year-old Buddhist artifacts in Afghanistan. As Bowden eloquently stated:

“Why should we go over to Afghanistan to fight the Taliban, when we have them right here trying to take down Historic Monuments in Saint Louis?…It’s the same thing, they just want to spin it differently.”

Jones is a typical example of the black trash that engages in such political grave-robbery: She is the daughter of one of St. Louis most infamous black criminals — a former Comptroller and embezzler named Virvus Jones.

Jones committed a multitude of Felonies before he was finally allowed to plead to four Misdemeanors and one Felony by George H. W. Bush’s gutless and simpering Justice Department, before being sent away to the federal “slam.”

Mayor Krewson is a typical leftist, who watched a nigro robber decapitate her first husband with a shotgun in front of their home and children in the fashionable Central West End. Despite this, she has never tired of placating and pandering to the black criminal element in St. Louis, which will use voter fraud to retire her from office in four years. (Her margin of victory in the Democrat Primary — the only election that matters — was less than 100 votes.)

As the Corrupt Leftist Media routinely do, some reporter from the St. Louis Post-Dispatch who covered the ceremonies at Fee Fee Cemetery included a reference to Dylann Roof in his coverage: This was a typical, gratuitously dishonest attempt to smear those in attendance with Roof’s horrific and inexcusable actions.

In the interest of full disclosure, it should be pointed out that the POST-DISPATCH was named as a “Communist Front” by the House Committee on Un-American Activities, and it flew the Soviet Flag over its front entrance for a number of years after World War II.

Unlike the coverage of the POST-DISPATCH, we at the CITIZENS INFORMER do not resort to smear and innuendo, we resort to the historical record.

One thought on “Honoring Confederate Heroes”