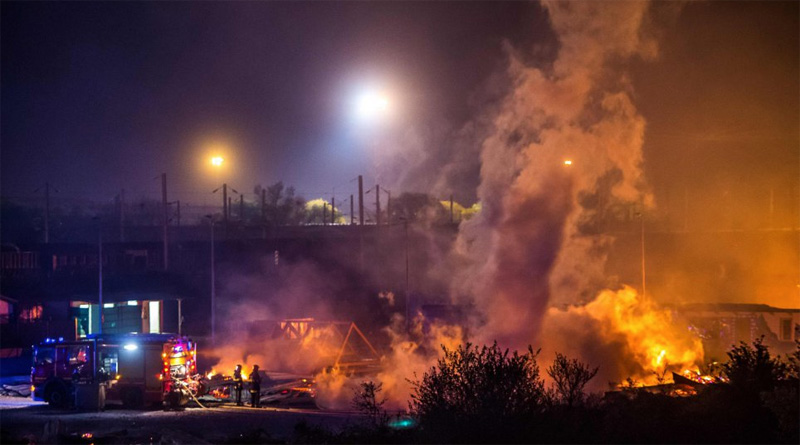 The BBC is reporting that a camp housing 1,500 migrants in northern France has been destroyed in a fire that officials said began during a fight between Afghans and Kurds.

At least 10 people were injured when the fire tore through closely-packed huts at the Grande-Synthe camp, near the port of Dunkirk.

Last month officials said the camp would be dismantled because of unrest.

The French north coast has been a magnet for migrants trying to reach Britain.

“There is nothing left but a heap of ashes,” said Michel Lalande, prefect of France’s Nord region.

“It will be impossible to put the huts back where they were before,” he added.

The population of the Grande-Synthe camp has grown since last October’s destruction of the “Jungle” camp near Calais, about 40 km (25 miles) away.

The migrants have been evacuated and will be sent to emergency accommodation, with two gymnasiums nearby already made available, Mr Lalande said.

There have been several violent incidents at the Grande-Synthe camp, which was built by the charity MSF (Doctors Without Borders) and opened in March 2016.

Six people were left injured with knife wounds after the fight that started the blaze.

Police intervened last month after five men were injured in a fight, and another man was stabbed in November, AFP reported.