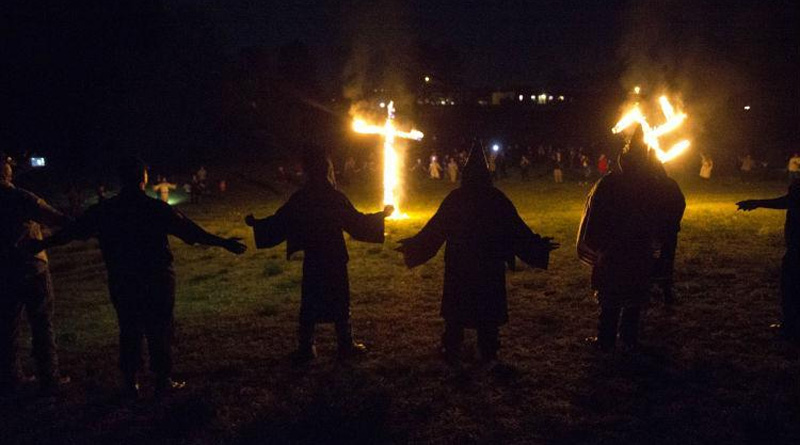 Joint A&E/ADL project was fake all along. A construct. A mendacious fabrication to mislead.

Less than 24 hours ago, the A&E project was renamed “Escaping The KKK: A Documentary Series Exposing Hate In America”

“So I guess A&E stands for … we will try to put Anything and Everything on TV,” she tweeted, “because we are a bunch of desperate, pathetic TV execs.”

“A&E Friday changed the title of an eight-hour documentary series focusing on Ku Klux Klan members, a project that drew criticism by those worried it would normalize a hate group after it was announced earlier this week.

Generation KKK will now be called Escaping the KKK: A Documentary Series Exposing Hate in America (Jan. 10, 10 ET/PT), a title that more explicitly states the focus of the series and the nature of the group at its center, A&E says.

In a statement released Friday, A&E explained the move. “The network is changing the name of the show to ensure that no one can mistake its intent and that the title alone does not serve to normalize the Klan.”

A&E, which is partnering with the Anti-Defamation League (ADL) on the project, also said it has created a partnership with Color of Change, “the leading next-generation African-American civil rights organization.”…”

Hmm. A joint project between A&E, the Color of Change, DLJ of One People’s Project, the Klan and the Anti-Defamation League to “expose hate in America” … sounds like something a real Klan group would want to be part of, amiright?

In a statement, the network said that it had decided not to air the program after being made aware that field producers had made payments to interview subjects in exchange for access, in violation of ethics policies regarding documentaries.

“A&E learned last night from the third-party producers who made the documentary that cash payments — which we currently understand to be nominal — were made in the field to some participants in order to facilitate access,” the statement read. ” While we stand behind the intent of the series and the seriousness of the content, these payments are a direct violation of A&E’s policies and practices for a documentary. We had previously provided assurances to the public and to our core partners — including the Anti-Defamation League and Color of Change — that no payment was made to hate group members, and we believed that to be the case at the time. We have now decided not to move forward with airing this project.” …”

So, it was a bunch of actors all along. It was about as real as the WWE. A&E hired a bunch of losers to play the boogeyman for a heartwarming ADL documentary on “fighting hate” that would end in “Escaping The Klan.” Who could have ever predicted that?

Update: Apparently, Steven Howard of the North Mississippi White Knights was the star of the show:

“The setup is warm and fuzzy. “Girls, I got y’all some gifts,” says Steven Howard, presenting his two young daughters with prettily wrapped packages, which they eagerly rip into. The cameras then reveal what’s inside: the distinctive pointed hoods of the Ku Klux Klan.

“Giving my girls my legacy,” Mr. Howard says as he helps place them on their heads. …”

I had been hearing since July that this guy was a fraud.