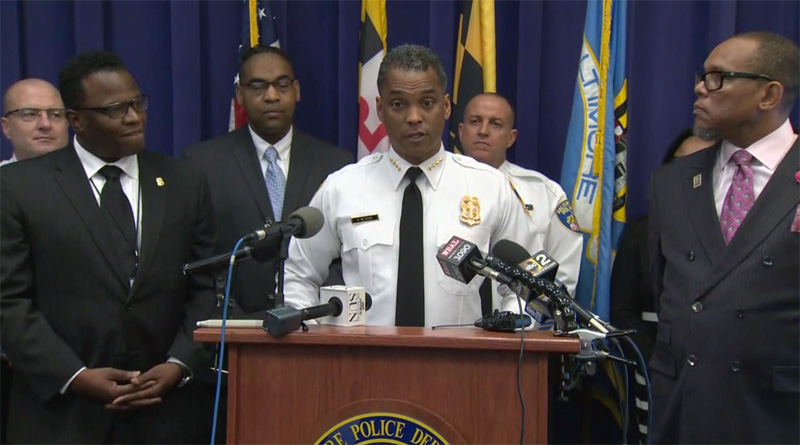 Darryl De Souza, Baltimore’s black Police Commissioner, appeared alongside Baltimore’s black Mayor at a recent “hip-hop” concert in that city. De Souza briefly addressed the crowd and apologized “for all the things that the police have done dating back 200 years.”

Instead of the appreciation Commissioner De Souza expected in return for his pandering, he was roundly booed and subjected to many hyphenated profanities that his fellow nigros prefer to punctuate every sentence they utter.

There is only one thing that would satisfy the average black when it comes to police, and that’s the total elimination of law enforcement at every level. Nothing else will ever satisfy them, because it is the police who routinely interfere with their endless criminality.

Commissioner De Souza might spend his time more profitably by attending some white function and apologizing for black violent crime, black property crimes, black illegitimacy rates, black drug use, black welfare participation rates and black illiteracy, all of which are “off the charts” compared to any other “demographic.”

He could acknowledge the enormous burden white people bear in feeding, housing, clothing and educating blacks and their bastards. The simple truth is that blacks would be stacked alongside the highways like chord-wood, were it not for the generosity of white people, whose taxes support many of them.

Likewise, nigros commit about 90% of all the homicides in the U.S. each year. (This assumes that most murders that occur in America’s large urban areas –- without witnesses and in the middle of the night — are black gang members “ventilating” each other, a pretty safe assumption.)

Despite the fact that those murders cannot be attributed to any particular race, blacks still managed to murder 9,400 of each other in 2016, despite the efforts of police. If police were disbanded to placate blacks, that figure would increase dramatically, probably rising to 100,000 or more black murders per year.

No doubt, blacks would then march, demonstrate and protest about the “total abandonment of our black neighborhoods by law enforcement.”

One thought on “Can’t Win Here!”